When the Elders of his tribe approach him and tell him the story of a dream they’ve had that warns of the end of the world, Inuk Theo (Ikummaq) takes up the task of bringing the dream’s message to the Elders of the South. He travels to New York City, rents a room in a hotel, and wanders the streets looking for the Elders he needs to warn. It’s there that he meets Chloe (Johnson), a young homeless woman. She takes him under her wing, and in turn she introduces him to her friends, Tyler (Springer), Sancho (Oram), and Mr Sweet (De Shields). They each react in different ways to the story that Theo tells, but Chloe wants to help him get his warning out to as wide an audience as possible. But it’s slow-going until Mr Sweet tells Theo about the United Nations building, and suggests he take his message there. Theo finds himself detained, but once he’s released he finds an unexpected ally in Monica (Sorvino), a green campaigner who can help Theo’s message reach a wider audience. 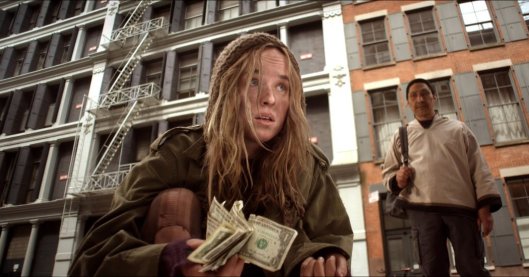 There’s no avoiding it: Chloe & Theo is not the movie it should be. What should have been an endearing, humorous, heartfelt movie with a late but still timely ecological message, instead is a lumpen mess, a blundering attempt at bringing together all those elements into one satisfying whole. It’s hard to work out how it all could have gone so horribly wrong. It’s a fish-out-of-water story told in a very simple fashion, but with so many visual and narrative non sequiturs that it feels like a longer movie hacked down to its current running time entirely for commercial reasons (and not very good ones at that). Its environmental message is more simplistic than simple, and boils down to “rampant consumerism bad”, “listening to the planet good”. But that focus is dropped into the narrative at random times and for random reasons, with the characters – aside from some unnecessarily aggressive U.N. security officers – fully on Theo’s side but with no idea of how to help him. This means the first forty-five minutes, before the arrival of Monica, is replete with scenes where Theo’s naïvete is treated as a source of easy laughs, and the narrative moves forward with all the purpose of a stranded whale.

In the end, the movie doesn’t have an end, and what happens feels like a cop-out, designed to add some pathos to a movie that has only one truly emotional moment – and even that comes and goes without any context to support it. Also, the movie isn’t helped by the two main performances. Ikummaq is a non-professional so can be excused some very awkward line readings, and even though he exudes a quiet strength and dignity, he lacks the on-screen presence that would have allowed audiences to connect with him more effectively. Johnson, however, is a professional, but hers is a terrible performance, a succession of pouts and glowering expressions that highlight just how one-note her portrayal actually is. And giving her a few dirty smudges around her face and a mane of unkempt hair (while everyone else who’s homeless remains immaculately groomed) further hinders any credibility she might be trying to attain. There’s so much else that either doesn’t make sense, or doesn’t fit in, or feels forced, that the movie feels like yet another bad idea from the lab of Victor Frankenstein. Sadly, Sands, and despite very good intentions, lacks the wherewithal to tie everything together, and includes too much that is either far-fetched, problematical, dramatically redundant, or all three.

Rating: 3/10 – the Arctic scenery is stunning, an animated sequence is appropriately nightmarish, and there’s a great Indie soundtrack, but overall, Chloe & Theo is a disaster on a par with the one it warns about; lacking depth and a consistent tone (a homeless march on the U.N., anyone?), this won’t do anything for the green movement, or for viewers unlucky enough to give it a try.