Just as a bank is about to close, a customer and an applicant for one of the teller’s positions, as well as three firemen, reveal themselves to be robbers, intent on emptying the safe. They’re expecting to grab around a million dollars, but find only $70,000 instead. It’s at this point that the assistant manager (Franco) tells them about the old vault located in the basement, one that holds six million dollars. The robbers – sisters Leah (Eastwood) and Vee (Manning), their brother Michael (Haze), and their accomplices, Cyrus (Loneker) and Kramer (Milford) – begin the process of breaking into the vault, but as soon as they do, strange things start to happen. It all appears to tie in to another attempted robbery at the bank in 1982, when a man in a white mask “snapped” and killed some of his hostages by burning them alive in the old vault. As the robbers find their numbers dwindling, it becomes a race against time to evade both the police waiting outside, and the supernatural forces at work within. 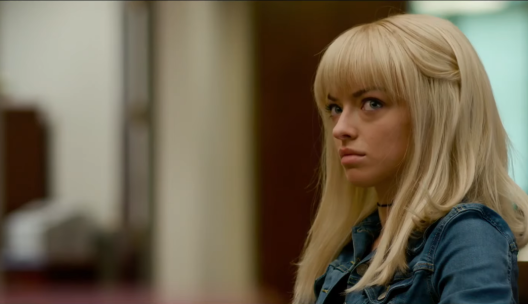 It’s something of a given that if you try and splice two genres together, then it’s a rare occasion when both benefit. The Vault is one such movie. An uneven and unsuccessful mix of crime and horror genres, it’s basic premise – robbers get more than they bargained for when they pick the wrong bank – is played out with all the subtlety and consideration of an idea that’s only been partly thought through, and which serves only to highlight the paucity of the premise’s development. Make no mistake, this is yet another horror movie where paranormal events occur because they can, and not because they should or if they make sense given the overall set up. Co-written by director Bush and Conal Byrne (who has a small role as a bank employee), the script lumbers from one unconvincing scene to another, and fails to make any of its characters memorable or more than cyphers. Leah and Vee have an adversarial relationship but apart from Vee accusing Leah of planning to disappear once the heist is over, there’s nothing of substance to support Vee’s distrust. Likewise, Michael is presented as an inherently good man, but as we’re never granted an insight into why he’s with his sisters, it’s all for nothing.

The longer the movie continues the more muddled it gets. Fans of the horror genre will spot a glaring “twist” very early on, and will be spitting fake blood over a final scene that is so hackneyed and predictable – as well as betraying the movie’s own internal logic – that it has to be seen to be believed. Meanwhile, fans of the crime genre, and particularly those who like a good heist caper, will feel short-changed by the derivative nature of Bush and Byrne’s set up and the various ways in which tried and trusted genre elements are trotted out without making any impact at all. Against all this, the cast have no chance but to keep their heads down and hope for the best, with Eastwood especially ill-served in a role that lacks both depth and a clearly defined character arc. Movies such as The Vault will continue to be made, and audiences will continue to be disappointed by the ways in which their makers fail to understand the basic needs and requirements of such genre movies. And therein lies both the real crime, and the real horror…

Rating: 3/10 – with its muddled storyline and questionable theatrics, The Vault offers little in the way of authentic thrills or chills, and soon becomes irredeemably tiresome; another genre hybrid that makes a disappointing patchwork out of its good intentions, it’s an unfortunate backward step for Bush and Byrne following their much better work on The Reconstruction of William Zero (2014).