Simon Spier (Robinson) is in high school. He has three best friends – Leah (Langford), Abby (Shipp), and Nick (Lendeborg Jr) – loving parents (Garner, Duhamel), a kid sister, Nora (Bateman), whose culinary efforts he praises whether they’re good or (usually) bad, an interest in drama, and a big secret: he’s gay. Being a teenager, of course, nobody knows that he’s gay, but when Leah tells him that another pupil at their high school has come out anonymously online, Simon begins talking to him via e-mail. Soon, he and “Blue” are exchanging their mutual thoughts and feelings on their personal circumstances. When another pupil, Martin (Miller), discovers Simon’s e-mails, he uses them to blackmail Simon into helping him get together with Abby. Afraid of being outed, Simon does his best to set them up with each other, while also trying to bring Nick and Leah together (because Nick is attracted to Abby). But his attempts at matchmaking backfire, and Martin does what Simon has feared all along: he outs Simon to the entire school… 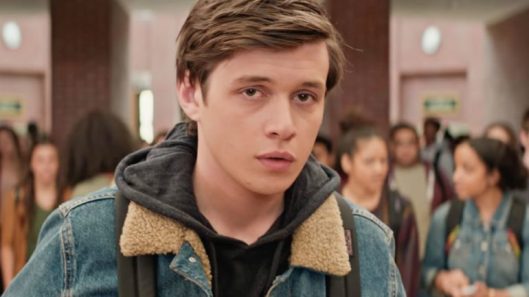 Widely touted as the first movie by a major Hollywood studio to focus on a gay teenage romance (and it’s only taken until 2018 to happen – way to go, 20th Century Fox), Love, Simon is a tender, heartfelt, and overwhelmingly sweet movie based on the novel Simon vs. the Homo Sapiens Agenda by Becky Albertalli. It features a good central performance by Robinson as the modest but likeable Simon, and it hits all the right notes in its attempts to focus on his struggle to deal with the implications of being gay, the fear of being outed, and what it means to have to protect that knowledge. And yet, once Simon’s secret is revealed to one and all, what has been a confidently handled, and sincerely expressed story – with a nice mystery sideline in trying to work out Blue’s identity – suddenly becomes an unexpected fantasy based somewhere between the world of John Hughes’ teen dramas and a return trip to the Land of Oz. All along, Simon has been dreading everyone finding out that he’s gay, and it’s at this point in the movie where you could be forgiven for thinking that things will start to get really difficult for him.

Au contraire, mon ami. Aside from a (very) brief moment of uninspired, and childish, leg-pulling (bullying is really too strong a word for it), the only other fallout from Simon’s outing is the decision of his three best friends to avoid him – he did manipulate them after all. Otherwise, his family prove to be mega-supportive, his teachers express zero tolerance for any homophobic behaviour by the other students, Martin apologises to him while admitting his own insecurities, and when Simon challenges Blue to meet him at an upcoming carnival, what seems to be the whole high school turns out to be there for them (oh, and his friends forgive him as well). Now, there’s nothing wrong with a happy ending, but this is like something out of the Thirties and early Forties when happy endings were guaranteed (back then it might have been called Andy Hardy Comes Out… of the Barn). If the movie’s message – coming out is easy-peasy – is intentional, then that’s fair enough, it’s still a piece of entertainment, and designed to do well in the mass market. But as a reflection of what is likely to happen in the real world when coming out, then Love, Simon is a far from perfect choice from which to take your cues.

Rating: 7/10 – a wish fulfillment tale that’s breezy and fun but also deliberately anodyne in places, Love, Simon is enjoyable and refreshing for its choice of topic, and benefits from good performances throughout – Rothwell’s drama teacher with attitude is a highlight – as well as Berlanti’s sensitive direction; becoming an entirely different movie altogether once Simon is outed, though, undermines the character’s emotional struggle, and paints first gay love in such rainbow-like colours that any real sense of drama is abandoned altogether.