Saved by the timely intervention of Robin, Batman escapes the room full of spikes, while Linda is turned into a zombie by Daka. Batman and Robin look for another way into Daka’s lair, their opponent discovers his trap hasn’t worked. Taking no chances he detonates charges set into the roof of the entrance and collapses the tunnel. When the Dynamic Duo realise what has happened, they determine to find out where another entrance might be located. As they return to their car (with Alfred waiting as patiently as ever), two of Daka’s henchmen spot Robin getting into it. They follow the car and force it to pull over. Bruce wrong foots them, and when the henchmen drive off, it’s they who are followed. When they are pulled over, a brief fight sees them captured and taken to the Bat Cave. Alfred finds a note from Linda asking Bruce to meet her at an old house. Suspecting a trap, Batman enters the house alone, and is soon overcome by two of Daka’s men. Carried out in a wooden crate, Batman remains in it all the way to Daka’s lair, where the crate – with him still in it – is dropped into Daka’s crocodile pit, sending him to certain death… 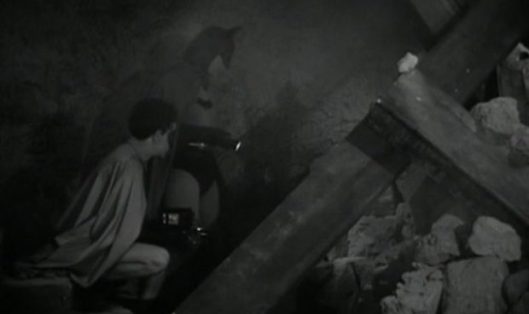 The penultimate chapter sees the serial keeping to the idea of Batman taking the fight to Daka, but not with the same intensity or determination as in Chapter 13. That said, he’s still more proactive than he’s been for most of the serial, although in doing so, Robin continues to be sidelined: when Batman goes to the old house, Robin has to wait in the car! The increased sense of urgency about the narrative still throws up the odd anomaly, though, with the capture of Daka’s men and their subsequent incarceration in the Bat Cave – alongside the still restrained Bernie (Jackson) – proving as unnecessary as the death of Marshall in Chapter 12. Both these sequences serve only to stretch the running times of their respective installments, and with The Executioner Strikes replaying around three minutes of Chapter 13 at the beginning, the need for so much filler remains disconcerting. The whole approach seems to support the idea that the writers didn’t have a great deal of time to put everything together, and as a result, the serial’s structure has no choice but to feel haphazard. 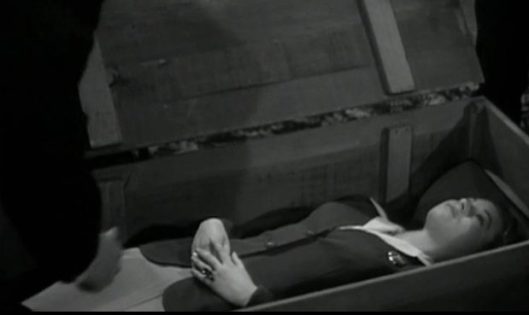 This episode also highlights other ways in which the narrative appears to have been made up from chapter to chapter. Daka’s pursuit of radium – given so much emphasis during the serial’s first half – could be regarded as forgotten or surplus to requirements  now, seeing how unimportant it’s become. Elsewhere, Linda’s involvement in the plot to trap Bruce Wayne doesn’t make sense (she has to arrive in a crate but can leave on her own two feet), and it’s troubling that a note can be left for Bruce at his home when neither Daka nor his men have any idea where Bruce lives in the first place. As we get nearer to the culmination of the whole saga, the writing has become noticeably lazier, and the urgency of the material is proving to be unequal to the task of papering over these obvious cracks. Hillyer is still plugging away, doing his best, almost refusing to let things get the better of him, but he’s hamstrung by the increasing paucity of the material. And even the nature of Batman’s intended demise, normally the source of mild conjecture as to how he’ll escape certain death, is here rendered moot by a narrative sleight of hand that won’t fool anyone, and which means there’s no need to ask, just how is Batman going to survive this time…?

Rating: 6/10 – the inconsistency of the serial as a whole is rendered vividly by the events of Chapter 14, and the misplaced energy employed in presenting them; with just the final episode of Batman left, there’s continued momentum but sadly it’s at a disservice to the story and the characters.