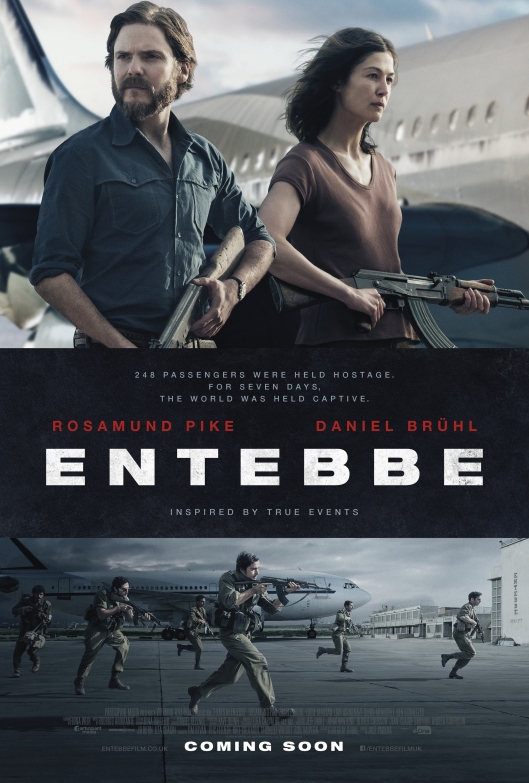 aka 7 Days in Entebbe

On 27 June 1976, Air France Flight 139 from Tel Aviv to Paris was hijacked following a stopover in Athens. The hijackers – two members of the Popular Front for the Liberation of Palestine – External Operations, and two members of the German Revolutionary Cells (Brühl, Pike) – diverted the flight to Benghazi in Libya for re-fueling before heading to their planned destination of Entebbe Airport in Uganda. Once there, the passengers and crew were herded into the transit hall of an out-of-use terminal, where eventually, the Jewish passengers were separated from the rest. With the hijackers and their associates on the ground in Entebbe receiving support from Ugandan leader Idi Amin (Anozie), they made their demands to the Israeli government, then led by Itzhak Rabin (Ashkenazi): $5 million for the release of the plane, and the release of fifty-three Palestinian and Pro-Palestinian militants. With Israel having a no negotiation with terrorists policy, they made it seem that they were willing to break with their standard protocol, but while the hijackers began to feel that their mission was going to succeed, the Israelis actually had other plans… 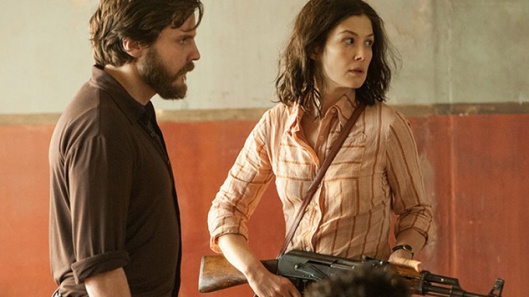 With three previous movies about the hijacking of Air France Flight 139 already released, and all of them within a year of the actual event, the first question to ask about Entebbe is, why now? (A second might be, and does it retain any relevance?) The answer to the first question remains unclear, as the movie, freely adapted by Gregory Burke from the book Operation Thunderbolt (2015) by Saul David, has a tendency to flirt with the truth for dramatic purposes, and in doing so, it manages to dampen the drama by lacking the necessary focus to keep viewers on the edge of their seats. The second question is easier to answer: it doesn’t, and for much the same reason as the answer to the first question. With the script trying to cover too many bases – the hijackers, the Israeli government, the hostages, Idi Amin’s need for personal aggrandisement, the raid that ended the whole thing, and a dancer taking part in a performance of the traditional Jewish song Echad Mi Yodea – the movie never settles on any one aspect for long, and never maintains a sense of the terror and danger that the hostages must have experienced. 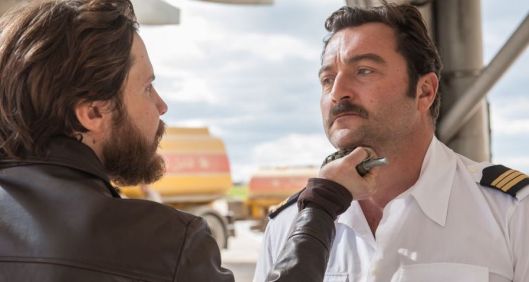 It’s a curiously bland affair, with plenty of gun-waving by Pike, but more navel-gazing from Brühl than is necessary, and lots of scenes where the enormity of the situation is trotted out for any slow-off-the-mark viewers – and with increasing emphasis. Most of the characters are forgettable, even the hijackers, as they’re treated more as functioning stereotypes than real people who existed in a real environment and experienced real emotions (much of this by the book). Pike’s angry revolutionary pops a lot of pills but we never learn the reason why, while Brühl’s softly softly bookseller seems out of place entirely. Ashkenazi is a tortured Rabin, Méncohet is the flight engineer who’s scared of no one, and Schnetzer gets his own journey as one of the Israeli commandos who take part in the raid (though why we need his journey is another question the script can’t answer). Only the ever-reliable Marsan, as hawkish Israeli Minister of Defence Shimon Peres, delivers a credible performance, and that’s against the odds, as Burke’s script and Padilha’s direction continually combine to undermine the cast in their efforts. Worst of all though, is the raid itself. After all the build-up, and all the foreshadowing, it’s shot using techniques and a style that wouldn’t have looked out of place in any of the movies made back in the wake of the hijacking.

Rating: 5/10 – handled with a dull reluctance to make it the thriller it should be, Entebbe lacks energy, pace, and any conviction in the way that it tells its story; fascinating only for the way in which it does a disservice to the event itself, it’s a movie that wastes so many opportunities, it’s as if the material itself has been hijacked – but no one told the producers.