Cassie (Negovanlis) and Mackenzie (Bauman) are best friends on the verge of leaving college and heading out into the wider world. Cassie has recently split up from her boyfriend, Matthew (Matechuk), while Mackenzie is coming to terms with being a lesbian. While Cassie tells Mackenzie about her love life, Mackenzie feels awkward about coming out to Cassie; she’s told their mutual gay friend, Levi (Gerhard), and recently her parents, but is unsure how Cassie will react. Persuaded  by Levi to look for a girlfriend on Tumblr, Mackenzie continues to avoid telling Cassie she’s a lesbian, while a couple of chance encounters with Matthew lead Cassie to wonder if she is over him. Inevitably, Cassie finds out about Mackenzie’s “secret”, and her disappointment causes a rift between them. As they navigate the new dynamic of their friendship, with each finding fault with the other for their attitudes and behaviours, both Cassie and Mackenzie try to come to terms with all the new feelings and emotions they’re experiencing. Mackenzie begins a relationship with Elliot (Clarke), while Cassie focuses on getting the job she wants. As they focus on their own needs, though, their friendship suffers even more… 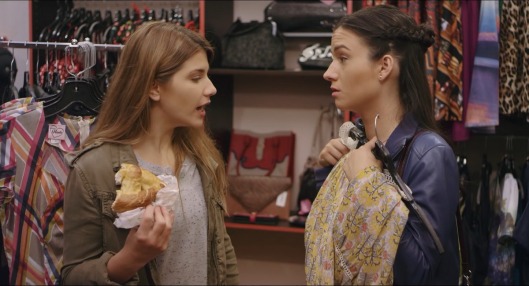 In any movie where one character keeps something a secret from their family/friends/workmates (delete as appropriate), the reason for their doing so often remains unanswered at best, or spuriously explained at worst. Almost Adults opts for the second approach and never makes Mackenzie’s reasoning convincing. Fortunately, this narrative misstep doesn’t hurt the movie too much, but it does mean that the animosity that develops between Cassie and Mackenzie feels unnecessarily contrived; in real life, Mackenzie’s reticence probably wouldn’t make such a difference. But where Adrianna DiLonardo’s subtly observant screenplay scores more highly is in its depiction not of two characters falling out because of a poorly motivated secret, but because they are finally learning how to be responsible adults. Their friendship – when we first meet them – is the kind that has them swearing to be in each other’s lives forever, the kind of promise that teenagers make out of a desperate need to be needed. DiLonardo soon waves off this affectation, and has Cassie and Mackenzie behave like the insecure and selfish young adults they really are. When faced with the demands of moving on to the next stage in their lives – and their friendship – life soon finds them unprepared and trying their utmost to control everything around them, including each other.

Although the movie falls under the LGBTQ+ banner thanks to its inclusion of openly gay characters, it’s not a movie about being gay. Rather it’s a movie about finding your place in the world, and at a pivotal moment in most people’s lives, when growing up becomes a mandatory requirement. Look what can happen if you don’t, the movie seems to be saying, and though it does include its fair share of coming-of-age clichés, it’s not weighted in favour of either character, and it does its best not to make easy judgments. Making her feature debut, Rotella handles the material with a lightness of touch that helps the movie through some of its rougher patches, and she has a knack for positioning the camera at odd yet effective vantage points. As the warring BFF’s, Negovanlis and Bauman have an easy chemistry that makes their characters’ falling out all the more dramatic, while Gerhard steals nearly all his scenes as the mandatory wise gay friend. The movie balances comedy and drama (with a smattering of romance) to good effect, and proves appealing throughout. It’s not ground-breaking stuff, or particularly original, but what it does it does with a quiet confidence and skill, and in a way that impresses more than it disappoints.

Rating: 7/10 – by not taking the obvious route in telling its story of a friendship undone by poor choices and a crippling lack of self-awareness on both sides, Almost Adults avoids looking and feeling like every other LGBTQ+ movie you might have seen recently; enjoyable though not exactly profound, and with two praiseworthy central performances, it’s a lovely, self-effacing diversion, and well worth anyone’s time and attention.