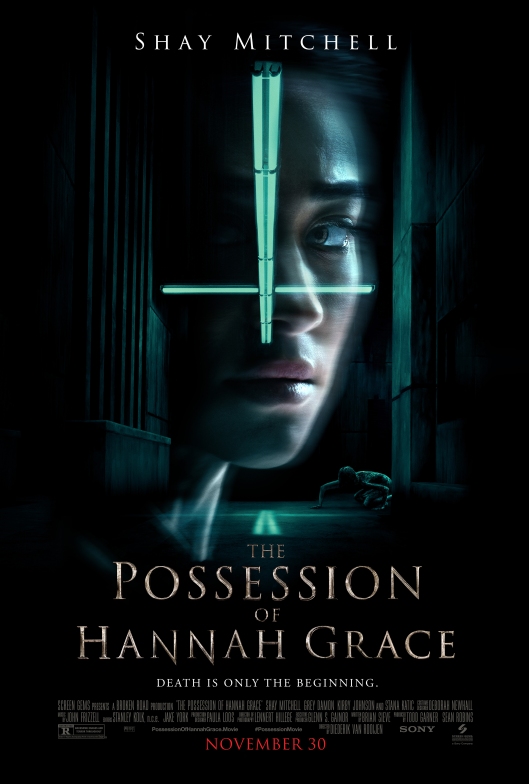 Megan Reed (Mitchell) is an ex-cop still suffering the lingering effects of PTSD from a shooting that saw her partner killed. Getting back on her feet, she takes a job working the night shift at the Boston Metro Hospital morgue. Working alone in her part of the building, her main responsibility is to see in any “new arrivals” and get them processed into the system. Her first night on the job passes by without incident, but on the second night something more out of the ordinary happens: the body of a young woman (Johnson), the victim of a deranged killer who has hacked her body and tried to burn it, is brought in. Alerted to the fact that the killer is still at large, Megan sets about trying to process the body, but her equipment fails at every turn. Later, while seeing in another body, a man (Herthum) slips into the morgue, and hides away. Later still, Megan becomes aware of his presence, and finds him trying to haul the young woman’s body into the incinerator. She overpowers him, and it’s then that he tells her that the young woman, Hannah Grace, isn’t dead… 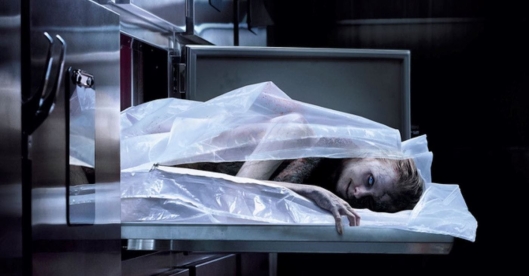 A modest little horror flick from Sony/Screen Gems, The Possession of Hannah Grace has slipped into cinemas recently, and though there’s always the temptation to think that if it’s in cinemas then it must be better than the usual horror fare released these days, in this case that wouldn’t be entirely appropriate. Originally entitled Cadaver, this has good production values for its budget, a good central performance from Mitchell, and a handful of creepy moments that are as much to do with its setting as it’s title character. However, the story holds about as much water as a paper bag, and the details of Hannah’s possession can best be described as “flaky to the max” (and that’s being generous). This flakiness is the excuse for the supporting characters to be picked off one by one, but on each occasion, the contrivance is obvious and perfunctory. Van Rooijen keeps the scares simple if predictable, but is unable to rein in the preposterousness that runs rampant through the screenplay. The end result is a movie that falls short of being as gripping, or frightening, as its setting should have made it, and which relies too heavily on its title character’s ability to make weird clacking noises when she (inevitably) moves around.

Rating: 4/10 – another frustrating horror movie experience foisted on our cinema screens, The Possession of Hannah Grace is unlikely to bother anyone who’s seen any of the four million other possession movies released in the last few years, or indeed, anyone coming to the genre for the first time either; dull in stretches, with a back story for its heroine that is as unnecessary as these things usually are, it does at least have an ending, and thankfully, not one that sets up a sequel.

Ryan Calhoun (Tompkins) is a vice cop working a sting operation with his partner, Jack (Carney), and newbie, Greenbaum (Cable). While he’s out getting coffee, something goes wrong in the apartment they’re monitoring, and when Ryan gets there, he finds the prostitute who’s been working with them, her trick, and Jack all dead, horribly mutilated, and apparently killed by Greenbaum. Greenbaum attacks Ryan, who shoots him dead, but not before Greenbaum has mentioned something to do with demons. Although he’s removed from the case by his superior, Lieut, Logan (Ironside), Ryan does his own investigating, and discovers that Greenbaum was a patient at a psychiatric facility before joining the force. Electing to go undercover at the facility, which is run by Dr Franklin Whitney (Vosloo), Ryan looks for answers as to why Greenbaum would have committed such a terrible act. Soon he learns that Greenbaum wasn’t the only patient who believed in demons, and that both himself and the other patients are in danger from something truly diabolical…

Beginning with a prologue that proves entirely superfluous to what follows, The Harrowing is a less than sure-footed attempt at blending a variety of genres, from the humble police procedural to the psychological thriller, and with a heavy coating of supernatural drama ladled on top. There’s the hint of a neat little mystery here, but it’s buried under a welter of kaleidoscopic lighting effects, more cutaways than could ever be necessary, and a fragmented screenplay that has a defined ending in mind but which doesn’t know quite how to get there without tripping itself up along the way (and more than once). There’s certainly ambition on display here as well, but writer/director Keeyes has opted for visual and aural excess over subtlety in telling his story, and the result is a shouty mess that lacks the coherence needed to keep the viewer intrigued or motivated to keep watching. Things aren’t helped by a truly awful performance from Tompkins, and a number of very questionable directorial decisions made by Keeyes as he tries to create a nightmare fusion of reality and fantasy, but succeeds only in creating a nightmare that the viewer is forced to navigate. By the end, it’s hard to care how it all turns out, and when it does, it does so abruptly – which is some consolation at least given the extended running time.

Rating: 3/10 – when veterans of this sort of thing like Vosloo and Ironside look as if they’d rather be elsewhere, then you know there’s a problem, though for The Harrowing it’s just one of many; another example of low budget equals low return, Keeyes has been doing this sort of thing for a while now, something that begs the question, isn’t it time to try another genre altogether?