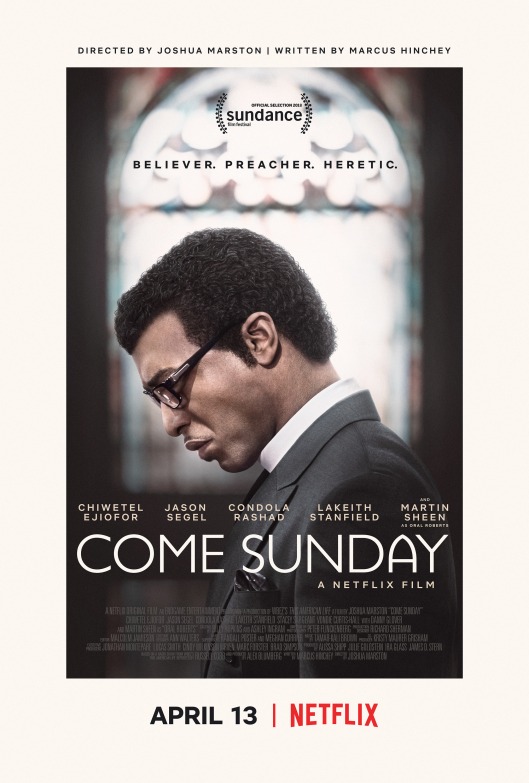 1998, Tulsa, Oklahoma. Carlton Pearson (Ejiofor) is the pastor of the Higher Dimensions Family Church. His congregation is a mix of blacks and whites and his services are attracting around six thousand members each week. He is highly regarded in the community, and has the respect of his peers, and the people who work for him at the church. Things begin to change, though, after he watches a programme about the Rwandan genocide. Believing that he has received an epiphany from God, Carlton begins to refute the notion that non-Christians will automatically go to Hell, and asserts that Jesus Christ died to absolve all of humanity’s sins, not just those who are saved or given absolution. This goes against the received teaching of the church, and it proves too much for many in his congregation, who elect to leave and worship elsewhere. The loss of so many parishioners is further exacerbated by his being declared a heretic by the Joint College of African-American Pentecostal Bishops. Throughout it all, Carlton wrestles with his faith, but remains true to his belief that God has spoken to him, even when it seems that God has now deserted him… 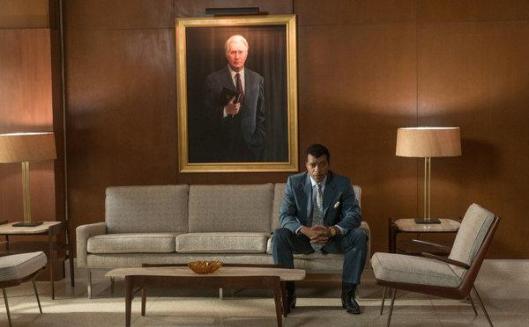 When watching a movie that explores notions of faith and religious belief, it’s often tempting to ask the question, just how is that faith going to be portrayed? Are we going to be treated to a blood and thunder show of Biblical proportions, or a quieter, more considered affair? Come Sunday, the true story of Carlton Pearson and his belief in universal reconciliation, opts for the second approach, but there are certain moments where a bit of blood and thunder wouldn’t have gone amiss. Despite the inherent drama that overtakes Carlton’s life, and which sees him lose his ministry, there’s much about Marcus Hinchey’s otherwise well constructed screenplay that keeps the movie from being as dramatic as it should be. Too many confrontational scenes – between Carlton and his associate, Henry (Segel); between Carlton and his mentor, Oral Roberts (Sheen); between Carlton and the Bishops – lack the vitality and energy that would allow them to stand out from the connective scenes around them. It’s like going to a revivalist meeting, only to find that everyone in the choir has laryngitis and they’re singing in a whisper. Even the scenes between Carlton and his wife, Gina (Rashad), where we learn there are marital problems, have a restraint about them that makes them feel of little consequence in the overall scheme of things.

But where a quieter approach proves more effective is when Carlton begins to question if his new-found belief is right. When everyone except for Gina and his assistant, Nicky (Sargeant), desert him, Carlton’s faith is rocked, and he begins to feel that God has deserted him too. Thanks to a terrific performance from Ejiofor, Carlton’s growing anguish is revealed through the star seeming to shrink physically on screen, while relaying the character’s conflicting emotions through a range of searching looks and pained expressions. There’s subtlety and range to Ejiofor’s performance, and it’s a good thing too, as Marston relies on his star more and more as the movie progresses. The director’s cautious development of the material is another reason why the movie doesn’t soar as it should, and why its examination of true faith feels laboured whenever it’s debated. There are fine supporting turns from Segel and Stanfield (as Carlton’s AIDS-affected musical director), but Sheen is miscast as Roberts, and Rashad is stifled by a role that borders on caricature. In the end, it’s a pallid movie that lacks energy, and which spends much of its running time steering clear of being anywhere near as controversial as Pearson was.

Rating: 5/10 – with its neutered narrative and sub-par dramatics, Come Sunday treats Pearson’s struggle to be explain his epiphany and subsequent denunciation as a heretic as if it were a footnote in a much larger story; with an ending that’s even more low-key than what’s gone before, the message seems to be clear: God isn’t the sure-fire draw He used to be.