New York, 1991. Author Lee Israel (McCarthy) is struggling with a combination of writer’s block, alcoholism, and financial troubles. Her last book wasn’t well received, and her agent (Curtin) is unable to get her an advance for her latest project, a biography of Fanny Brice. In order to make ends meet, Lee sells a letter she received from Katharine Hepburn to a local bookseller, Anna (Wells). Anna’s chance remark that she would have paid more for “better content”, allied with the discovery of a letter by Brice while doing research, leads Lee to forging and selling letters by well known literary figures. She’s successful at first, but in time suspicions are raised, and Lee is blacklisted. To combat this, Lee enlists the aid of her friend, Jack Hock (Grant), an aging British actor who is as much down on his luck as she is. But though he too is initially successful at selling Lee’s forgeries, it’s not long before she becomes aware that the FBI is involved, and actively talking to the people she’s sold to. And then Jack is arrested… 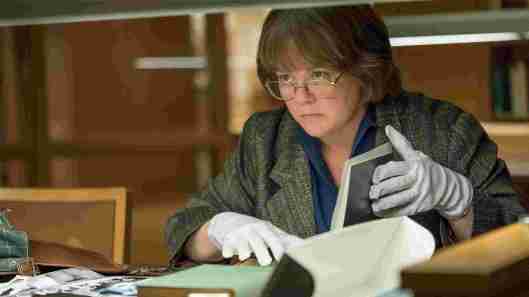 What would you do to maintain your fame and (minor) fortune? How far would you go to retain the idea that your work is still relevant when the evidence points otherwise? And how would you go about it without jeopardising what little respect you still have amongst your peers? These are all questions asked by Can You Ever Forgive Me?, a sobering yet archly humorous exploration of the ways in which bitterness and a misplaced sense of entitlement can lead someone to abandon their principles in pretty much a heartbeat. What makes Lee’s fall from grace so ironic is that she was arguably more successful as a forger than she was as a legitimate writer. It’s another aspect of the cautionary tale that made up most of Lee’s later life that the screenplay – by Nicole Holofcener and Jeff Whitty – correctly focuses on. With its bittersweet coda, that sees one of Lee’s forgeries regarded as real (and priced accordingly), there’s an argument that what she did was her best work of all, and she herself would have probably agreed (at her trial, she relays the fact that her time spent forging literary letters was the best time of her life). Was she aware of this while she wrote them? It’s possible, and if she did, it goes some way to answering a good number of the questions the movie raises about her.

In raising these kinds of questions, the movie is helped immensely by the performance of Melissa McCarthy. An actress who is in many ways hampered by her comedy persona, McCarthy is a revelation here, unlikeable yet likeably tenacious, arrogant yet without cause, and undermined by her own insecurities. It’s a tremendous portrayal that allows Lee to appear vulnerable, and unerringly caustic at the same time, while giving McCarthy her best role so far (and one that enables us to forget her other two movies of 2018, Life of the Party and The Happytime Murders). Partnered with an equally unforgettable performance from Richard E. Grant – the relish with which he tackles his role is infectious; no wonder he’s already won eighteen awards – McCarthy channels unexpected depths as Lee, and makes her more than just a hack with a drink problem and a (deliberate) shortage of friends. If the movie does Lee any kind of injustice, it’s in distancing itself from her being a lesbian, something that’s awkwardly, and unconvincingly, addressed through a tentative friendship with Anna. Otherwise, this is a tremendously unfashionable biopic about an unhappy, disreputable woman (and her equally disreputable sidekick) who seek to repair their fragile egos through lying to others, and themselves.

Rating: 8/10 – with a transformative performance from McCarthy, and astute, carefully layered direction from first-timer Heller, Can You Ever Forgive Me? is a dark comedy that touches on some very serious topics while daring the viewer to like its main character; fascinating and smartly handled, it’s a movie you feel the real Lee Israel would have been happy with, as long as she got the right credit.