1870. Bathsheba Everdene (Mulligan) shelling out on her aunt’s farm in Dorset. Her aunt’s neighbour, Gabriel Oak (Schoenaerts), is a shepherd with a hundred acres and two hundred sheep. One day he proposes marriage to Bathsheba but she rejects his offer, telling him that she is too independent for him and he would never be able to tame her. Soon after, Gabriel’s sheep are all killed when his sheepdog herds them over a cliff; unable to keep his farm going he is forced to sell up and move on. Bathsheba is sorry to see him go, but her sadness is by the news that she has inherited her uncle’s estate in Weatherbury.

Determined to run the estate herself, Bathsheba brooks no nonsense from her staff. Now a wandering worker for hire, Gabriel learns of a position as shepherd on the estate. When he arrives there he and Bathsheba are both pleased to see each other again, but she insists on the proper formalities now that she is his employer. When her efforts attract the attention of her neighbour, William Boldwood (Sheen), he too proposes marriage as Gabriel did. Bathsheba turns him down as well, and when she and Gabriel discuss the matter, his dislike for the way she treated Boldwood leads to her telling him to leave. But a problem with the sheep gives her no choice but to rehire him.

Some time later, Bathsheba is walking the grounds of her estate one night when she unexpectedly meets ex-soldier Francis Troy (Sturridge). He tells her she’s beautiful, but although she’s pleasantly surprised she tells him to leave. When she finds Troy helping with the harvest the next morning, she again tells him to leave, but before he does he manages to persuade her to meet him the next day. When she does, he proposes to her, and this time she accepts. They marry – against Gabriel’s advice – and Troy’s rapacious nature reveals itself. He milks the estate for money and treats Bathsheba like she’s his property. But his past comes back to haunt him in the form of Fanny Robbin (Temple), a young woman he was betrothed to but who went to the wrong church on their wedding day. She tells him she’s carrying his child; he agrees to meet her the next day but she doesn’t show up. Later, her discovered corpse is taken to Weatherbury (because she was a servant there). When Troy sees the body he tells Bathsheba she is nothing to him, and he leaves. He swims out to sea and Bathsheba is informed of his drowning. With the estate’s fortunes in jeopardy because of Troy’s gambling, Bathsheba is once more offered support from William Boldwood… 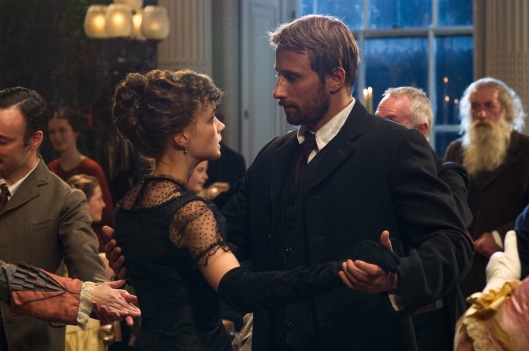 Leaving aside any comparison with John Schlesinger’s 1967 version, Far from the Madding Crowd is a hard movie to enjoy, determined as it is to play down the passion inherent in Thomas Hardy’s novel, and the social proprieties of the period. Thanks to the adaptation and screenplay by David Nicholls, and Thomas Vinterberg’s pedestrian direction, the movie fails to ignite at any point, preferring instead to tread safely along, ticking off the novel’s high points like a classroom exercise. This leaves the unlucky viewer wondering if and when the pace will pick up, or the buttoned-down emotions will ever be released in a way that can be recognised or acknowledged.

For this is a movie that trades on lingering looks and silent expressions. Bathsheba and Gabriel do little else but show their attraction for each other by looking pointedly and often at each other (God forbid anyone should display their feelings – William Boldwood excepted). So much is left unspoken there are moments that wouldn’t feel out of place in a silent movie. No doubt this is to allow Mulligan and Schoenaerts to “act” but instead it drags the movie along, and leaves both of them somewhat stranded, as the audience waits patiently for their expected romance to finally come to fruition (once Troy and Boldwood are dispensed with).

There’s also the sense that somewhere along the way – the editing stage, probably – the decision was taken to fit the movie to a two-hour running time, because this is a movie that feels hurried and disjointed at the same time. Some scenes feel truncated, while others feel as if they’re missing the one that should have come before. It’s an odd feeling, and never really goes away, even though the movie becomes more interesting once Bathsheba is married and it holds the attention a little better. Presented in this fashion, though, leads to the movie feeling like the edited version of a mini-series. (If there’s a Director’s Cut on the horizon, then a three-hour version wouldn’t come as a surprise.)

Against this, the performances are solid if unspectacular, though Sheen is a standout as the troubled yet hopeful Boldwood, the scene where he reveals his feelings about Bathsheba to Gabriel a small masterclass in making more from stilted dialogue than would seem possible. Mulligan convinces as a free spirit (though not as a woman instantly lovestruck by the romantic attentions of a soldier), while Schoenaerts gives such a laid-back performance it’s tempting to have his pulse checked from time to time. As the dashing Troy, Sturridge acts with his top lip to the fore, and delivers his lines as if he was reading from The Young Rogue’s Guide to Eligible Damsels. And Temple is wasted as Fanny, reduced to a few scenes and given little more to do than pop in and out of the narrative as required.

What saves the movie is Charlotte Bruus Christensen’s luminous landscape photography, allied to some richly detailed interiors, and a recreation of the period that feels exactly as it would have been. Beyond that, Craig Armstrong’s score is used sparingly and with surprising acuity, the few emotional scenes left free of music so as to focus the viewer’s attention on the scene itself, and not manipulate them into feeling the “correct” emotion. It’s a rare feat, but it works well here (unlike the scenes themselves).

Rating: 5/10 – sluggish and only fleetingly engaging, Far from the Madding Crowd looks and feels like a movie that deserves a better, more considered approach; while hitting its mark sporadically may account for some of the kinder reviews out there, this is still a major disappointment from Vinterberg, and if you’re a fan of Hardy, a letdown as well.