After another day of poor returns, depressed ice cream salesman Kenny Pantalio (Messina) contemplates throwing himself off a bridge and ending it all. But he’s interrupted by Lolita Nowicki (Spencer), a young woman with her own suicidal tendencies. When they discover they have the same therapist, it leads to them wandering through night-time Chicago until outside a swanky restaurant, Kenny is mistaken for a valet parker, and is given the keys to a Mercedes. Lolita convinces him to take the car, and that they should travel together to the Golden Gate Bridge where they can both commit suicide. As their journey takes them across country, Kenny and Lolita find themselves in a number of weird situations, from trying to rob a convenience store on the promise of their having a gun, to Kenny’s stealing a car that has a surprising cargo on the back seat, to a side trip to meet someone from Kenny’s past. Through trial and error they arrive in San Francisco, where Lolita’s own past catches up with her, and her relationship with Kenny prompts a sudden decision… 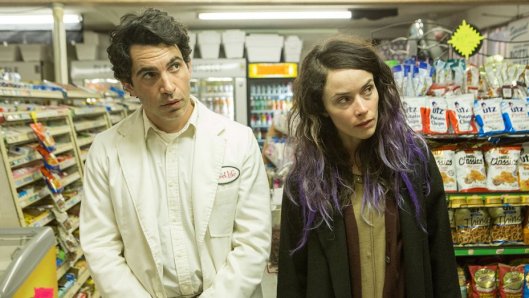 Despite the best of intentions, and the best efforts of its screenplay – by Jared Rappaport – its director, and its two leads, The Sweet Life lacks the necessary credulity to allow the viewer to connect with the characters and the plot. From the moment that Lolita interrupts Kenny’s suicidal reverie, the movie goes off in several different directions all at once, and it tries to become a drama, a comedy, and yes, a romance, and often, all at the same time. This scatter gun effect works well at certain moments, but falls flat at others, leaving the movie feeling haphazard and poorly constructed. Even if you accept the unlikely “meet-cute” that brings Kenny and Loilta together, the contrived nature of their subsequent relationship remains a recurring problem. The idea is that they will support each other during their road trip, but this rarely happens, as each is as selfish and inwardly focused as the other, and even when they do put aside their differences to come to each other’s rescue, it’s always because the script needs them to, not because it makes their journey that much richer or profound. That said, their journey does avoid easy sentimentality, and there are trenchant moments that work surprisingly well.

What Rappaport’s script also avoids is any in-depth explorations of Kenny and Lolita’s reasons for wanting to commit suicide. There are hints and clues, but none that are fleshed out enough to make sense, or allow the viewer to feel sorry for them. Kenny is depressed, and as it transpires, for a variety of reasons; Lolita is the same. But their intention to jump from the Golden Gate Bridge always feels like a stretch, the road trip a way of giving them time to realise that their lives aren’t as bleak as they think, and for the movie to make a number of telling comments about the nature of happiness. If you were watching the movie, and didn’t know why they were heading to San Francisco, you could quite easily believe this was merely another modern rom-com where opposites attract. And on many levels, when the script isn’t addressing this issue directly, the movie is much better for it. Messina portrays Kenny with an increasingly endearing manner that proves likeable by the movie’s end, but Spencer has the very hard task of making Lolita look and sound like someone who would exist in the real world. In the end, Spera’s direction proves too wayward to help matters, and the outcome is both dramatically and emotionally spurious, something that undermines those moments earlier in the movie that do work.

Rating: 5/10 – with little in the way of depth, and little in the way of examining the serious side of suicidal tendencies, The Sweet Life is a rom-com with dramatic pretensions it’s unable to pull off; a frustrating experience, it’s a low-key, genial movie that offers odd moments of poignancy, but never gels into anything more substantial.