Low-budget independent movies have been with us since the beginning of cinema itself, and have ranged from cheap and nasty horrors to poorly imagined sci-fi movies, and that glorious institution, the teen comedy. Some of these movies have managed to transcend their restrictive budgets and become successful – The Blair Witch Project (1999) is perhaps the best example – but most receive a fleeting moment in the spotlight before fading into obscurity, or appearing at odd hours of the night on cable or satellite channels that most people don’t even know are transmitting. The casts and crews that make these movies are often doing it for experience, the outside chance of being in a bona fide hit (or festival darling), or for the love of it (and sometimes all three). Whatever the reasons, there are thousands of these low-budget features made every year. And for any of them to stand out from the crowd, they’ve got to have something that most, if not all, the others don’t have.

In the case of Alex Grossman’s first feature, which was made for under $200,000, that something isn’t too easy to define. His tale is a fairly simple one: boy loves girl, girl doesn’t know, boy faces losing girl, boy comes up with risky scheme to keep her around until he plucks up the courage to tell her he loves her. Here, the boy is Ryan (Doherty), a bit of a maths whizz who works at Cy’s Auto Sound and Stereo alongside the girl he’s fallen in love with, Carly (Watson). Ryan is a few months away from going to MIT, but a far more pressing and urgent matter prompts Ryan into speeding up his efforts to make his feelings known. The store is marked for closure for failing to meet its sales targets, but undeterred by this, Ryan arranges for the store to have a massive one-day sale to help a) show that the store is still viable, and b) give him the opportunity to confess his attraction to Carly. Aided by his colleague and friend, Jeremy (Restauro), Ryan sets about saving the store, and his potential future relationship with Carly. But, of course, there are more than a few obstacles along the way, including regional manager Brady (Ashbaugh), and the news that he and Carly once dated… 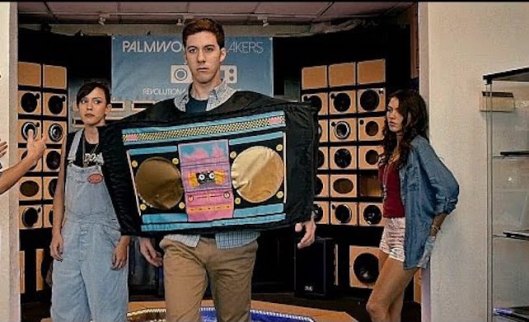 Written and directed by Grossman, Hickey is a confident, freewheeling mix of comedy, drama and romance that is appealing and likeable, while not exactly reinventing the wheel. The movie is a collection of stock characters and situations that sometimes border on being clichés, but thanks to a combination of Grossman’s direction and his cast’s enthusiasm, the movie doesn’t suffer too much even though there are glaring moments where originality clearly wasn’t the order of the day. Thankfully, these moments don’t detract from the overall enjoyment to be had from watching Ryan and his often humorous efforts to save the store, and the romantic longueurs that pepper the script on various occasions. But be warned: there are points in the story where the momentum that Grossman has built up grinds to a halt, and the movie teeters on the brink of losing the viewer’s interest. This seems to be as much about Grossman’s inexperience in directing features – he was a commercials director before this – as it is about the way he’s structured the material over its eighty minute runtime. But again, there’s more here that works than doesn’t.

The milieu will be familiar to most viewers – a band of quirky underachievers take on a seemingly hopeless situation – but this is one of those movies where the visual and character shorthand that comes with it, makes the viewing experience all the more enjoyable. There aren’t too many moments where you’ll find yourself laughing out loud  (wry smiles would seem to be more appropriate), and the drama of the looming store closure never really feels like it’s locked in as solidly as it should be, but Grossman scores highly with his characters. Ryan is the romantically awkward, gawky teenager whose heart is in the right place but whose confidence with the opposite sex is hiding right behind it, and terrified to come out. Carly is the seemingly carefree love interest who can see past Ryan’s gauche behaviour and nerdish looks and who will, inevitably, realise she loves him too. The supporting characters are (largely) well integrated into the narrative, with Jeremy’s prickly, occasionally inappropriate behaviour allowed to stand out because of his connection to Ryan. The only character who doesn’t ring true is Brady, the erstwhile villain of the piece whose demeanour feels cartoonish and forced.

In telling his somewhat lightweight story, Grossman at least ensures that the viewer remains invested in what’s going to happen next, even if some of the plot developments come across as laboured. There are times throughout when it’s clear that Grossman is striving for more than his budgetary constraints will allow him, but it’s all in service to the material, and in trying to make the movie as good as possible. Where some movie makers settle for what they can achieve without making that extra effort to improve things, Hickey‘s creator is at least aiming for more. That he’s not always successful is a shame, as the movie has a lot of heart and a clutch of winning characters. A more polished script would have helped too, but it’s still hard to knock a movie that’s clearly trying, and which doesn’t want to disappoint its audience too much or too often.

In the end, Hickey is a likeable movie that won’t make much of an impact, and which is likely to fall into that category of unfortunate features that people discover by accident while channel hopping, or trawling through the movies available on Netflix or Amazon Prime. It’s not obscurity as such, but it is a sad fate for many movies, though Hickey doesn’t deserve it. With its amiable approach, and wistful romantic idealism at the forefront of the narrative, the movie is another example of what can be achieved on a very low budget indeed. Seamus Tierney’s cinematography is a bonus, his framing and use of medium shots often adding to the emotion of a scene, and there’s a wonderful score by Gregory Reeves that complements the material without being unnecessarily intrusive. In assembling his first feature, Grossman is to be congratulated for doing so well, even if he’s not been able to overcome some of the more obvious drawbacks.

Rating: 6/10 – a movie that shows promise in terms of where its writer/director’s career is heading, Hickey is a teen comedy/romance/drama that makes great efforts to stand out from the crowd, and avoid being labelled “so-so”; with good performances from its (mostly) young cast, it’s a sweet-natured, agreeable movie that may not garner a huge following, but which should still attract viewers that will appreciate its modest charms.