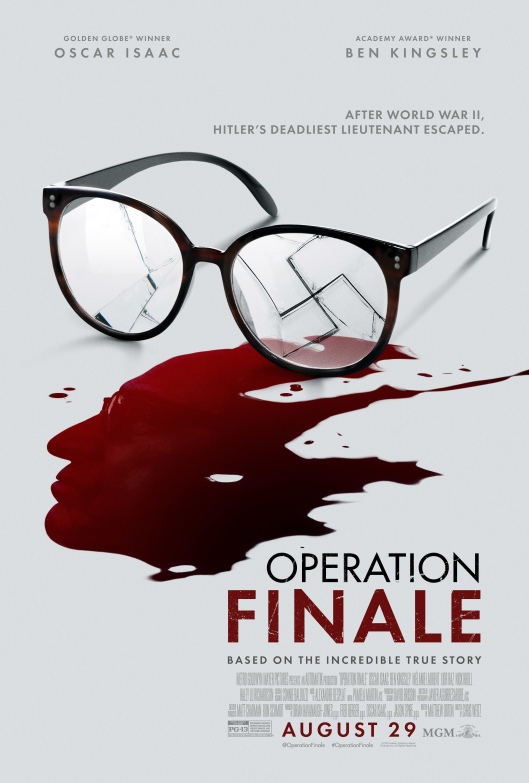 In Buenos Aires in 1960, a young woman called Sylvia Hermann (Richardson) begins dating a young man, Klaus (Alwyn), who tells her he lives with his uncle, who has been looking after him since his father died in World War II. The kindly uncle actually is his father, Adolf Eichmann (Kingsley), long wanted for war crimes, and now the focus of an Israeli attempt to kidnap him and bring him to trial. Mossad assembles a team that includes Peter Malkin (Isaac), a brash, opportunistic agent who was involved in a previous attempt to capture Eichmann that ended tragically; Rafi Eitan (Kroll), an intelligence specialist; and Hanna Elian (Laurent), a doctor and former agent. The team travels to Buenos Aires where they organise a safe house, and plot Eichmann’s abduction. Once captured, though, they find themselves with a problem: the only way they can get Eichmann out of the country is on an El Al plane that’s scheduled to leave in ten days’ time. But first, El Al wants a signed affidavit from Eichmann that he is willing to travel to Israel to stand trial… 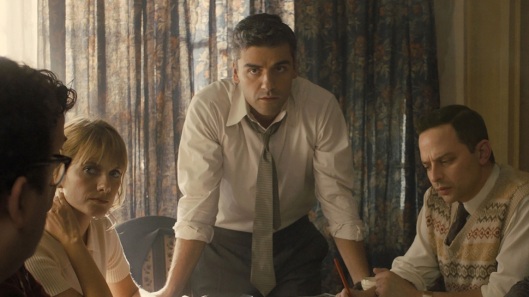 The capture and subsequent “extradition” of Adolf Eichmann from Argentina to Israel in May 1960 has all the hallmarks of an exciting adventure story, with the Mossad team working in secrecy, and under the very real threat of being captured by the Argentinian police and finding themselves put on trial for espionage. And that’s without the substantial number of Nazis and Nazi sympathisers living in Buenos Aires at the time, who would most likely have had them killed on the spot. Eichmann’s capture was a huge coup for the Israelis, and though Operation Finale conflates much of the background detail – e.g. Sylvia Hermann began dating Klaus Eichmann in 1956 – it remains true to the spirit and the general sequence of events that saw one of the principle architects of the Final Solution finally brought to justice. However, Matthew Orton’s screenplay only provides an occasional sense of the danger Malkin and his colleagues were facing, and director Chris Weitz doesn’t seem able to make the movie as tense and exciting as it should be. Instead, we’re treated to a number of scenes where the team debate whether or not to kill Eichmann there and then (even though that’s not the mission), and several repetitive scenes where they endeavour to get him to sign El Al’s affidavit, but to no avail. 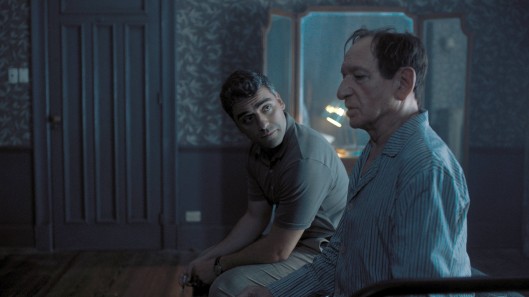 It’s a shame, as though this is a distinct improvement on The Man Who Captured Eichmann (1996), it never really gels as the historical thriller that was so clearly intended. The performances are uniformly good, with Kingsley subdued yet calculating as Eichmann, and Aronov matching him for intensity as chief interrogator Zvi Aharoni, but they’re in service to material that is often dry and unimaginative. Dramatic flourishes such as flashbacks to the death of Malkin’s sister (which put Eichmann unconvincingly at the scene), and a party where the entire gathering shouts “Sieg Heil!” and gives the Nazi salute over and over, stand out because they are more emotive, but elsewhere the movie treads an even keel and rarely strays from feeling perfunctory and ever so slightly mannered. Even the last minute race against time to get to the airport with the police on the team’s tail is less than exciting, just another cog in the story’s wheel that the makers feel obliged to turn for the audience’s sake. It’s another moment of restrained pretence in a movie that lacks the kind of emotional impact such a dramatic story truly deserves.

Rating: 5/10 – despite the good use of Argentinian locations, and David Brisbin’s detailed production design, Operation Finale feels more like the cinematic equivalent of a first draft than a finished product; with a handful of soap opera elements that further dilute the drama, the movie is too broad and too uneven in its approach to be anywhere near successful, but on its own terms it will suffice until the next interpretation comes along. 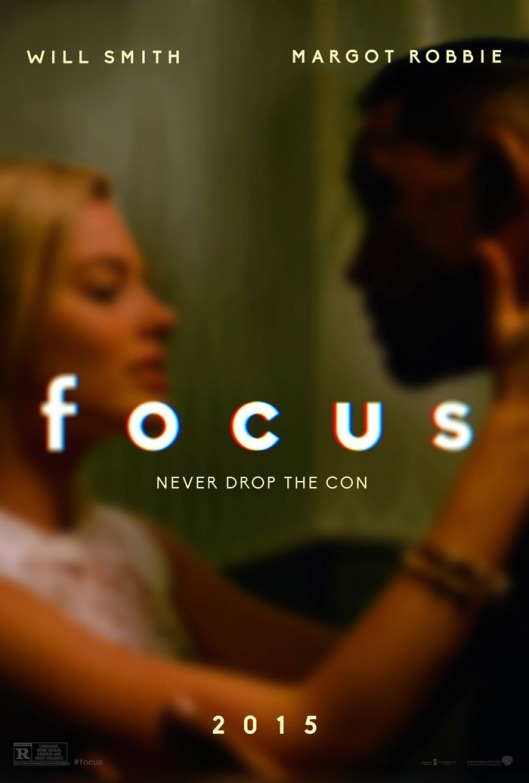 Longtime conman Nicky Spurgeon (Smith) meets inexperienced grifter Jess (Robbie) and despite his initial misgivings, agrees to tutor her in the ways of becoming a real con artist. He takes her to New Orleans where he involves her in a series of minor cons such as pickpocketing. He introduces her to his crew as they prepare to hit the town during the Superbowl weekend. Altogether they amass $1.2 million from their efforts, but Nicky takes Jess to the Superbowl game where he’s challenged by compulsive gambler Liyuan Tse (Wong). The bets grow bigger until Nicky loses the money he and his crew have gained. He gets Liyuan to go for double or nothing and loses again. It’s only on when the stakes reach an even higher level that Jess realises it’s all a con designed to part Liyuan from his money.

With their relationship becoming romantic, Nicky’s reservations about becoming involved with a fellow con artist lead him to pay off Jess and leave her in New Orleans. Three years pass. Nicky is in Buenos Aires working a sting on local businessman and racing car team owner Garriga (Santoro) when he discovers that Jess is Garriga’s girlfriend. His feelings for her resurface, making it difficult for him to continue with the sting. He tries to pursue her at the same time, but Jess is reluctant to get involved with him a second time. Garriga’s head of security, Owens (McRaney) is suspicious of what Nicky is actually up to, and when he and Garriga become aware of the true sting, they grab Nicky and Jess as they try to leave town. Taken to an abandoned warehouse, Nicky has to find a way to keep both of them alive. 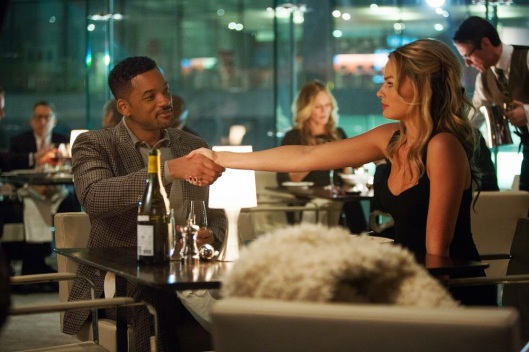 Will Smith’s recent big screen appearances – the dreadful After Earth (2013), and cameos in Anchorman 2: The Legend Continues (2013) and Winter’s Tale (2014) – have been less than overwhelming, so it’s no surprise that he’s returned with a role that allows him to express the kind of genial, roguish charm that he’s more renowned for. However, thanks to a script by directors Ficarra and Requa that never quite works out what type of movie it is, Focus allows Smith only occasional chances to shine, and in the end, leaves him as stranded as Jess is in New Orleans. At one point, Nicky says that he can convince anyone of anything, but in practice he never convinces the viewer that his feelings for Jess are real, or even that he’s as good a conman as he makes out.

Away from Smith’s painful attempts at looking lovelorn, we have a movie that struggles to add any thrills to proceedings and only really comes alive thanks to Wong’s involvement at the Superbowl game; his extrovert performance is the movie’s one highlight. Afterwards it’s all downhill with a less than convoluted con game that steals shamelessly from The Sting (1974) and asks us to take such a leap of faith in terms of what happens to Nicky that most viewers will be picking their jaws up off the floor in stunned disbelief (or amusement). Slackly directed, and with a supporting cast reduced to mouthing platitudes, Focus won’t hang around long in the memory, and proves another stumbling block in Smith’s return to the A-list.

Rating: 5/10 – good location photography and a glossy sheen to things lift Focus out of the doldrums, and the pickpocket sequences – overseen by Apollo Robbins – are cleverly constructed and edited; with Robbie adrift in a sea of watered-down machismo, however, this is not a movie that serves its cast particularly well and is worryingly predictable.