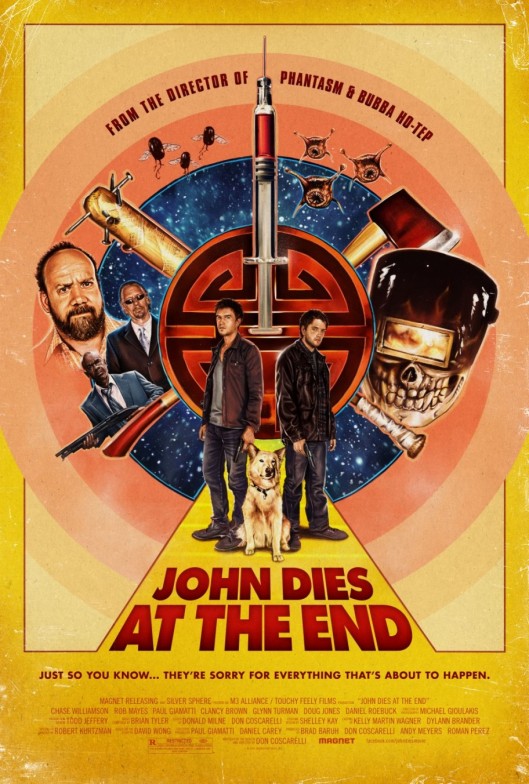 Adapted from the cult novel by David Wong, John Dies at the End has two things working against it from the start: condensing the novel into ninety minutes was always going to mean a shed load of situations, characters, storylines and nuances being left out, and whatever situations, characters, storylines and nuances were included were never going to marry up convincingly.  And so it proves, with the movie throwing everything it can at the screen and the audience in the hope that some of it will impress or resonate.

It begins with an amusing prologue that helps give the viewer an idea of the approach the movie’s going to take with the material, being both surreal and off-kilter.  From there, we meet Dave (Williamson), a nervous-eyed slacker getting ready to meet journalist Arnie Blondestone (Giamatti).  Dave begins to tell Arnie about his experiences in the previous two years, and while Arnie is sceptical, as Dave tells him about all the strange things that have happened to him, Arnie’s credulity is tested at every point.  Because Dave’s story is very strange indeed, and includes a rasta street magician; a black substance, nicknamed ‘soy sauce’ that when ingested gives a person the ability to read minds, see the future, and all manner of other psychic abilities; John calling Dave on the phone despite being dead; the involvement of the police represented by a world-weary detective (Turman); possession by entities from another dimension; a dog that may be more than he seems; renowned paranormal investigator Dr. Albert Marconi (Brown); a trip to another dimension; an evil entity called Korrok; exploding eyeballs; a girl with a prosthetic hand; “the mall of the dead”; and a man called Roger North (Jones). 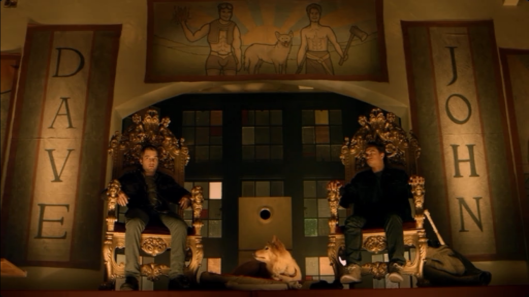 With so much – and more – being thrown into the mix the result is an uneven, occasionally unappealing movie that aims squarely for cultdom but never quite achieves it.  Director and writer Coscarelli (the Phantasm series) is an obvious choice for the material but with so much to choose from the novel, the finished product looks like he used a cherry picker.  It’s a scattershot movie, one that struggles to maintain a through line and ill-advisedly uses a non-linear approach to the material, giving it a stop-start, stutter-like feel.  Some scenes follow each other without the barest connection between the two, and characters generally lack both conviction and coherent motivation, leaving the viewer to either go with the flow and just accept what’s happening, or head for the exit in frustration.

If you do stick around then there are some incentives.  Despite being one of the barmiest movies in recent years, it’s somehow held together by Williamson’s bemused and confused performance, and – paradoxically – the fact that you can’t predict just what will happen next, or which odd tangent the movie will drag itself along.  John Dies at the End has so many WTF? moments it’s a little impressive, even though they don’t help the movie as a whole.  But Williamson finds a way to make Dave as fully rounded a character as possible, and finds able support from Mayes as the goofy John of the title.  Both actors intuit the material in a way that helps immeasurably in grounding things (however tenuously), and prove themselves a great team in the process.  There’s also a good line in black humour (though it’s as inconsistent as the rest of the movie), and there’s a couple of great sight gags.

The rest of the cast fare as best as they can but are largely ill-served by Coscarelli’s script.  Brown’s appearance amounts to a cameo, while Turman seizes his chance and makes his detective the only character in Dave’s story we might recognise in the real world.  Giamatti delivers the best performance and in truth that’s not much of a surprise, but it’s good to have him aboard, especially when he sees what’s in the back of Dave’s car.

There are many books and novels that are regarded as “unfilmable”, and while John Dies at the End certainly presents more than its fair share of problems for the aspiring adaptor, a more focused version could be made.  Until that happens, it’s likely that fans of the novel will be disappointed, and newcomers to Dave and John’s universe(s) are likely to be left asking themselves, “What the hell was that all about?”  A shame, as under the right conditions, and with the right script, that version of John Dies at the End would definitely be the cult classic this adaptation is aiming for.

Rating: 5/10 – a mishmash of ideas and plot threads that often wither and die before they’re fully developed, John Dies at the End gives us fantasy for fantasy’s sake in lieu of a decent plot; an incoherent mess given a boost by some creative low-budget visuals.