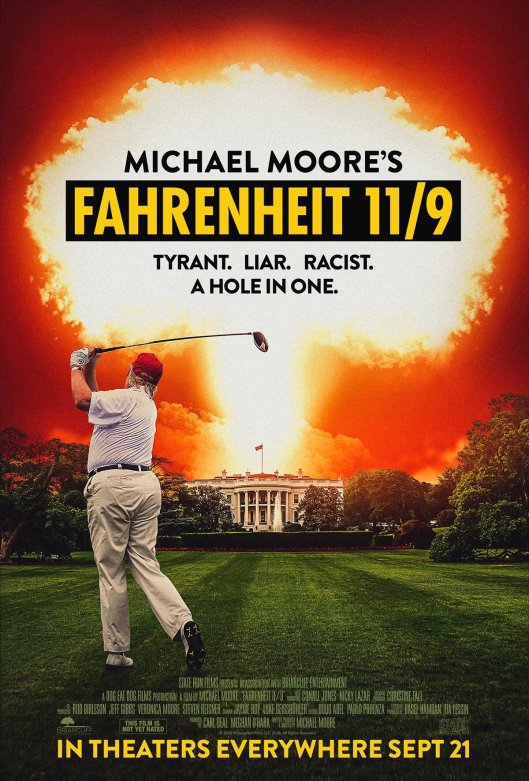 Where to start…? As well as being the beginning for this review, you can imagine that was also the quandary faced by Michael Moore when it came time to decide what to include in his latest documentary, a state of the nation address that shows the movie maker at his angriest and unhappiest. Moore has been chronicling the on-going downfall of America for over thirty years, and here his passion and talent for exposing the hypocrisy at the heart of American politics is firmly at the forefront of Fahrenheit 11/9‘s clarion call to the American people. The movie begins with the election of Donald Trump as President, and Moore asking the question, “How the fuck did this happen?” But if you think that’s something of a slap in the face, there’s more to come, as Moore examines the uncomfortable relationship between Trump and his daughter, Ivanka; explores the correlation between Trump’s racist comments and the increase in systemic racism; abjures the political system that encouages the complacency that allows Trump’s recidivism to go unchecked; and asserts that democracy – true democracy – is something that America has never experienced. 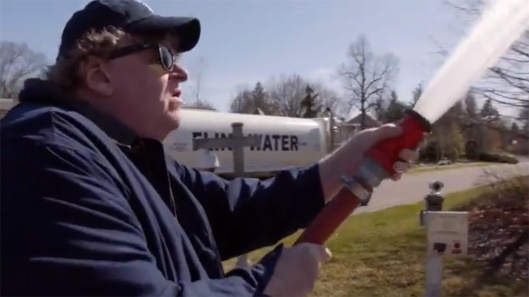 Away from Trump, Moore returns to his home town of Flint, Michigan, a once thriving town that is now a shadow of its former self. With the town struggling to keep itself going, in 2011 State Governor Rick Snyder backed a plan to replace the mains water pipeline that supplied clear water to Flint from Lake Huron. While the new pipeline was being built, Snyder also backed the decision to use the Flint River as the primary source of clean water for the town. But the river was toxic, and though officials repeatedly told residents it was safe to drink, soon people were getting sick. Lead levels in the water were found to be so high that the people of Flint, including between six and twelve thousand children, had been effectively poisoned. There was an outbreak of Legionnaires Disease that claimed the lives of ten people. And nothing was done about it until recently. Even a visit from Barack Obama failed to alleviate the issue – and all because he asked for a glass of water. And that’s without the military coming in and using abandoned buildings and deprived areas in Flint as a place to carry out their war games. How much worse can it get for Flint? Even Moore doesn’t know. 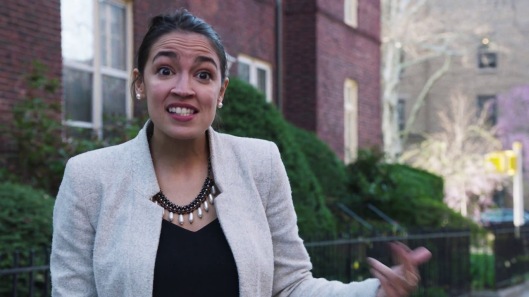 Moore also turns his attention to the West Virginia teachers’ strike in early 2018, and the aftermath of the Stoneman Douglas High School shooting that took place around the same time. With both these events, Moore shows how a new generation of Americans such as Richard Ojeda are beginning to challenge the political status quo with shows of solidarity and national marches. Moore shows there is still hope for the future, and makes the point that perhaps the nation needs this period of social and political upheaval before it can move on more profitably as a democracy. But it all comes back to Trump, the master liar and manipulator who took advantage of a bankrupt political system and used it to his own ends. To get an idea of how much Moore detests the man, see how uncomfortable he looks when he and Trump appear together on The Roseanne Show (and he has to be nice to the future President), and then watch in astonishment as he presents us with footage of Adolf Hitler speaking with Trump’s voice. Heavy-handed? Most definitely. And what follows isn’t the most rigorous of historical analogies, either, but as a warning of what might be around the corner, it’s chilling. And who’s to say Moore is wrong? After all, he was one of the few people who predicted Trump would win the presidency…

Rating: 9/10 – fiercely argued, and presenting facts and figures that often get left out of the argument – 75% of Americans believe immigration is good for the US; Barack Obama took more money from Goldman Sachs than any other contributor – Fahrenheit 11/9 sees Michael Moore back to doing what he does best: holding up a mirror to the myriad failings of American politics; necessarily hard to watch if you have any empathy for a country that has no idea how to make itself great again (or even averagely successful), it’s a movie that takes no prisoners on either side, but which also manages to find grains of hope in amongst all the fiascos and disasters. 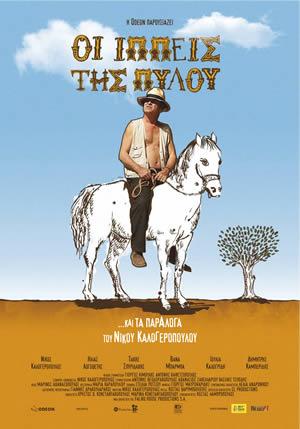 Aging and once distinguished actor Telemachus (Kalogeropoulos) owes so much money to his creditors that he has to flee the theatre he’s playing at early one morning, taking as many of his props and costumes as he can in the back of a truck. He’s also had a recent health scare, brought on by too much smoking and drinking. He arrives in historic Messinia and the rundown castle of Polypylon, site of a horse sanctuary, where he’s greeted by Euhemerus (Kaberidis) and his brother Myron (Logothetis).

Telemachus spends an uneasy first night at the castle, and the next morning is reacquainted with an old actor friend, Voikalis (Kimoulis). But Voikalis is suffering from Alzheimer’s and doesn’t recognise him; he’s there to perform for the two horses he has at the sanctuary. Telemachus later decides to go for a ride in the surrounding countryside. He meets a woman named Haido (Barba) who invites him to have lunch with her, but he carries on with his journey, telling her he’ll come back later. He also meets an old man (also Kalogeropoulos) carrying a large wooden cross and pretending to be Jesus. They talk for a while before the old man moves on. Later, Telemachus’ horse runs away from him, leaving him stranded. He goes in search of it, but while the horse finds its way to Ephemeris’ estranged daughter, Democracy (Kalogridi), Telemachus finds himself getting even more lost than he was to begin with.

Haido waits for him to return but Telemachus eventually finds his way to where Democracy and his horse are waiting with a team of ecologists called the Riders of Pylos. Riding the horse again, he returns to Haido where she provides food and wine for him, and eventually, despite his attempts to resist her, they have sex. The next morning he returns to Polypylon, where he gives Myron and Euhemerus invitations to a celebration being organised by the Riders of Pylos, and where Telemachus and Democracy meet again and discover a mutual attraction.

A light and frothy concoction by the multi-talented Kalogeropolous, Riders of Pylos is sufficiently entertaining to avoid any notions of whimsicality or waspishness, and comes with such a sense of freedom that it makes the viewer wish for the kind of (seemingly) rootless existence that Telemachus experiences once he’s fled from his creditors. His is a blundering presence, presumptuous at times, dramatic at others, but always with a flair that, financial pressures aside, never seems to desert him. He’s like a mini-cyclone, unaware of the damage or chaos he’s creating, a force of nature surrounded by a greater force of nature that he seems oblivious to.

That he beguiles and bewitches two of the women he encounters could be said to be very fortunate indeed, but Telemachus is, despite his odd features and wrinkled appearance, an attractive, sensitive man, a man who views romance as an essential part of living. His brief connection with Haido shows his sense of pride slowly being eroded by her determination to bed him, until he reaches a point where, for him, it all becomes irrelevant and he might as well go through with it. He’s a man after all, with a man’s sense of personal, unavoidable destiny, and Haido is left overwhelmed by the experience; once committed, Telemachus is unable to give a terrible “performance”.

As the wandering actor, Kalogeropoulos is a delight to watch, his clumsy physicality and brash demeanour in the role developed over the course of the movie with an almost effortless disregard for the character’s pretensions and woes. It’s a performance where the actor goes out of his way to make his character a little too self-absorbed and out of his depth to be anything other than entirely sympathetic. Telemachus is a terrific creation, and Kalogeropoulos broadens his portrayal with occasional moments where Telemachus has moments of self-reflection that prove liberating for him. With his distinguished career on hold for the foreseeable future, Telemachus’ growing enthusiasm for this “new world” around him is delightful and charming.

It’s a good thing too, as the storyline is overall, a slight one, and with very little depth to it other than what’s created through the use of philosophical and historical quotes, some of which are daubed onto the walls of Polypylon itself. These are enough to make the characters seem more learned and intelligent than they actually are, but they lack the cleverness needed to elevate the characters’ posturing. Also, there are too many scenes, particularly involving Myron, that fail to advance what little story there is, and hold the movie back from fulfilling its potential. Telemachus’ journey of self-discovery is the main focus but getting lost and being forcefully cajoled into having sex aren’t exactly life changing experiences, and Kalogeropoulos’ script never quite knows what to do next with the character.

What the movie does know what to do with is its location at Polypylon, a wonderfully rundown castle in the hills that is a character all by itself, and which provides a splendid backdrop for several scenes in the movie. Either shown at a distance to show its full size, or lit up at night, Polypylon is a fantastic setting for Kalogeropoulos’s tale, a theatrical “venue” used to good effect throughout, and brimming with colour. So too is the surrounding countryside with its hills and waterfalls and boulders and pools, shot with precision and fidelity by DoP Yannis Drakoularakos. There are moments of breathtaking beauty to be had in Riders of Pylos, and each one is to be savoured.

Writer/director/star/composer Kalogeropoulos has fashioned an appealing, seductive tale that should bewitch audiences everywhere. Earthy, occasionally profane, and entrancing, the movie is a testament to its creator’s abilities and his knowledge of Greek values through the ages. A small, but hugely enjoyable blend of rural drama and contemporary romantic mores, this is well worth seeking out and capable of delivering the kind of warm feeling few movies even aspire to. Rating: 8/10 – refreshing for being entirely carefree with its portrayal of romantic ideals, Riders of Pylos is light and jovial, and all the better for it; with a sterling central performance, it’s a movie that wants its audience to have as good a time as possible, and on that level, it succeeds admirably.

NOTE: The following trailer doesn’t have any English subtitles but is still worth a look: