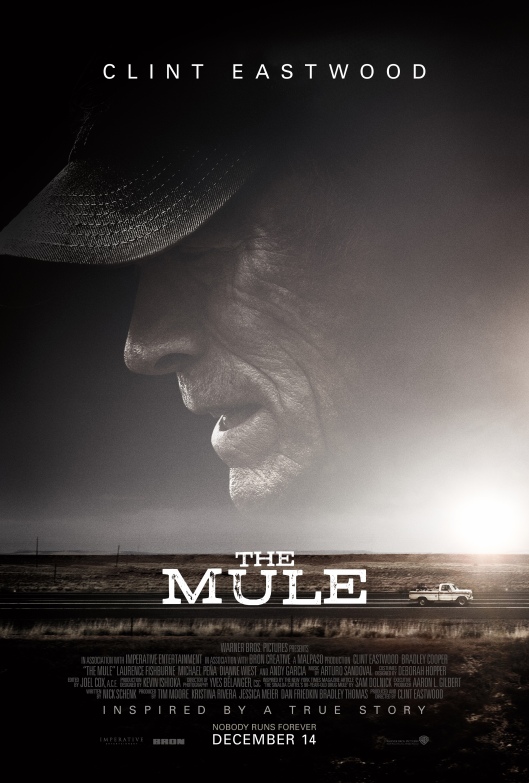 In 2005, Earl Stone (Eastwood) is a thriving and award-winning horticulturalist whose commitment to his work life has left him estranged from his family. Twelve years later, Earl’s business has failed, his home is on the verge of being repossessed, and his appearance at the engagement party of his granddaughter, Ginny (Farmiga), leaves him in no doubt that he still has a long way to go in making amends. But a surprise suggestion by one of the guests at the party – that he accept a job just “driving” for some people the guest knows – leads Earl to working for a group of Mexicans who he comes to realise are part of a drugs cartel. His job is to transport cocaine across country, and he’s well paid for his time and effort. Earl uses the money to help his local community, and his family, while becoming the most successful drug mule in the cartel’s history. But the DEA, in the form of agent Colin Bates (Cooper), soon learns of Earl’s existence, and they become determined to catch him. With the cartel shadowing him on one side, and the DEA chasing him on the other, Earl finds himself in an untenable position… 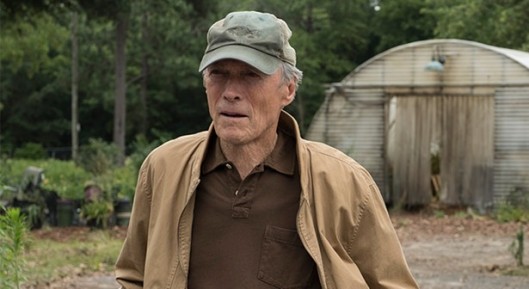 Making his first appearance in front of the camera since Trouble With the Curve (2012), here Clint Eastwood reminds us that when you need a grizzled old-timer who has to be both charming and stubborn – fractious, if you like – then there’s no better choice than the former Man With No Name. Based on the real life story of octogenarian Leo Sharp, who eluded capture by the authorities for over ten years, The Mule is an enjoyable, if rickety, drama that relies heavily on Eastwood’s presence, and which treats its subject matter with a lightness of touch that should feel alarming. But thanks to Eastwood’s performance, and a great deal of goodwill garnered by his direction of Nick Schenk’s uneven screenplay, the movie plays like a strange wish fulfillment fantasy where someone can be part of a drugs cartel and still be considered a “good guy”. The script has Earl behaving like Robin Hood, using his new-found wealth to help others, while avoiding any suggestion that his impaired morality is in any way wrong. And yet, when you have your main character flying down to Mexico to meet his employer (Garcia), and embracing the lifestyle (and the women; this sees Eastwood get more “action” than in all his other movies combined), it’s hard to accept the movie’s own compromised attitude. 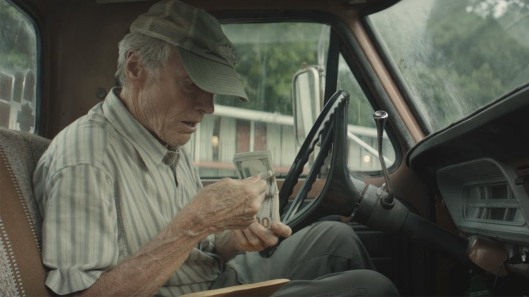 It’s this inability to make a firm decision about Earl’s status – is he an anti-hero or not? – that stops the movie from plumbing any depths that can’t be called superficial. There’s no sense of threat here either, with Earl ignoring repeated instructions and threats from the cartel and being let off the hook time and time again. And inevitably, Earl reunites with his family as a reward for his criminal endeavours. Through it all, Eastwood gives one of his best performances, elevating the material and showing the likes of Cooper (all starch and buttoned-down restraint) and Peña (in another sidekick role) how to maximise an under-written character to good effect. On the plus side, Yves Bélanger’s romanticised cinematography adds a layer of nostalgia to proceedings, harking back to a time when the likes of Earl were straightforward heroes (he’s a Korean War veteran), and running drugs would have been impossible to even imagine. And though the humour can sometimes be misplaced or inappropriate – Earl’s casual racism is awkwardly handled throughout – there are laughs to be had, and the movie’s genial attitude is appealing. It’s not a  bad movie per se, and Eastwood is the reason why, but it’s not quite so good that it deserves anything more than average praise.

Rating: 6/10 – whimsical and unpretentious, The Mule is a lightweight offering from the veteran actor/director that lacks some much needed grit, and which opts for enforced poignancy as a substitute; the supporting cast aren’t allowed to do much, and there are stretches where the movie coasts along happily, but to no great effect, all of which adds up to a pleasant but unremarkable experience that fails to make a lasting impact. 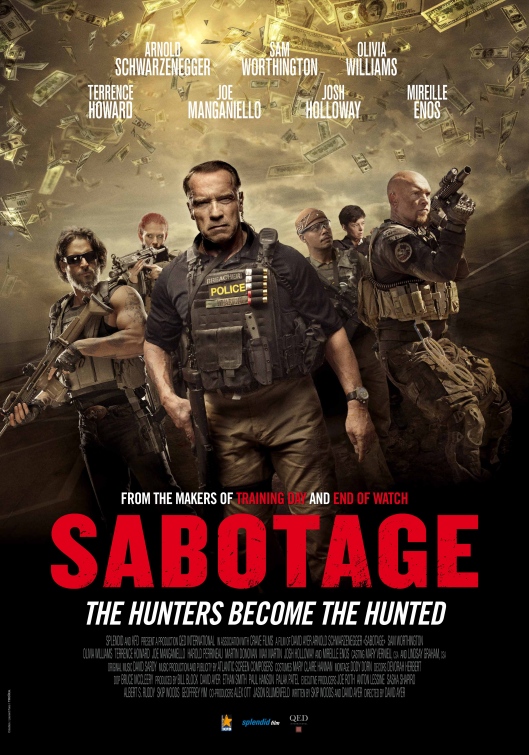 When a DEA task force led by veteran John “Breacher” Wharton takes down a house used by a Mexican drugs cartel, it becomes clear they have a more primary mission their superiors know nothing about: to steal $10 million of the cartel’s money.  Hiding the money in the sewers to be collected later, “Breacher” and his team – “Monster” (Worthington), “Grinder” (Manganiello), “Sugar” (Howard), “Neck” (Holloway), “Pyro” (Martini), “Tripod” (Vance), and Lizzy (Enos) – are soon under investigation by Internal Affairs on suspicion of stealing the money, but when they go to collect it, they find it’s gone.  Six months later, and with IA having found no evidence to prove they took the money, “Breacher” and his team are reinstated.

Shortly after, one of the team is killed when his trailer is hit by a train (it was moved onto the tracks while he was unconscious).  The death is investigated by Detective Caroline Brentwood (Williams) and her partner Darius Jackson (Perrineau).  Attempting to interview the team proves fruitless, and Brentwood enlists “Breacher”‘s help in talking to them.  They visit one of the team, only to find he’s been killed as well, and in a way that suggests the Mexican drugs cartel is targeting them in retaliation for stealing the money.  They find a third member of the team murdered also, along with clear evidence that he was killed by the cartel, one of whom they find dead nearby.  Jackson traces the dead man’s mobile phone to an apartment block; he and Brentwood take a squad there to arrest them but “Breacher” and the remainder of his team get there first and kill the men they find there, only to discover they aren’t the cartel’s hit squad.  When the bodies of the cartel hit squad are found a short time after, and it becomes clear they couldn’t have committed the first two murders, “Breacher” realises it’s one of his team that is picking them off one by one.

Things quickly unravel.  One of the team tells Brentwood about the money, and is subsequently murdered while talking to her and “Breacher”.  With no other possibilities as to the murderer’s identity, “Breacher” agrees to a meeting with them.  In the ensuing showdown, the whereabouts of the money is revealed and the motive for its theft becomes clear. 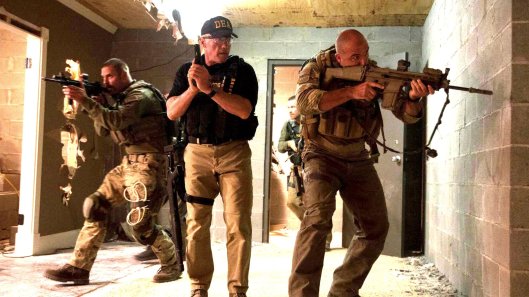 Aiming for the kind of contemporary, gritty, urgent, down and dirty feel achieved in two of Ayer’s other outings as a writer – Training Day (2001) and End of Watch (2012) – Sabotage starts promisingly enough with a well-staged assault on the cartel house but then stumbles badly with its decision to delay the ensuing action for six months.  It doesn’t make sense that the cartel would wait that long to make their reprisals, nor that the killer within the team – especially when their motive is revealed – would also wait so long to target their teammates.  There’s also the matter of the back story involving “Breacher” that is revealed halfway through, which, once out in the open, muddies the waters even further.  With three separate ways of approaching the murders, and the reasons for them, Ayer’s script does its best to keep things as straightforward as possible, but there are too many times when narrative complexity is abandoned for moving the story along quickly to the next action sequence.  This leads to some lapses in logic that also weaken proceedings, such as Brentwood jumping into bed with “Breacher” at the drop of a hat, and “Breacher” allowing one of his team to have a drug problem, and there’s an air of convenience throughout.

Continuing his return to the big screen, Schwarzenegger puts in a grizzled performance that still relies on his trademark squint and square-jawed impassivity.  He’s the rock that anchors the movie but he doesn’t bring anything new to the table, and coasts on his physical presence, leaving the emoting to the rest of the cast (it’s still good to have him back though).  The casting of Williams is an interesting choice but she’s hampered by having to provide “Breacher” with a potential love interest, as well as trying to be a bad-ass detective.  From the team, Worthington and Enos fare best, while Holloway, whose career post-Lost seems to consist of uninspiring cameo turns, is forgettable in a role that appears written as one-dimensional.  Howard is sidelined for much of the movie, and Perrineau is the kind of peppy partner who’s so annoying you wonder why Brentwood hasn’t already shot him for the peace and quiet.

What hampers the movie most, though, is the curiously flat feel it has.  Everything happens at the same pitch, with little or no attempt to make even the action scenes tense or exciting, and the drama is disappointing for being so casually handled.  With Ayer’s direction largely AWOL, his and Skip Woods’ script is left to fend for itself, and its limitations are cruelly highlighted as a result.  By the time we get to the movie’s epilogue – a long time coming in and of itself – the viewer is left wondering what was the point.

Rating: 5/10 – not quite as terrible as it looks, Sabotage is nevertheless a serious letdown given the talent involved; one for fans of Ah-nold, and best viewed as an undemanding Saturday night/beer and a takeaway movie.