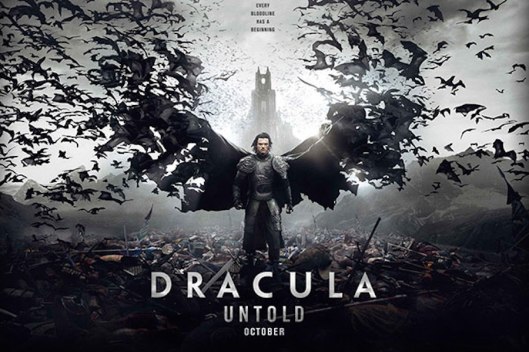 Set in the Middle Ages in Eastern Europe, fealty to the Sultan of Turkey is observed by the giving of a thousand boys to be trained in his army.  Such is the early fate of Vlad Tepes (Evans), who grows up to be a fierce warrior and friend of the subsequent Turkish ruler, Mehmet (Cooper).  Turning his back on war, Vlad returns home to rule his people.  He marries Mirena (Gadon) and has a son, Ingeras (Parkinson).  After years of peace, Vlad is alerted to the presence of Turkish scouts in his homeland.  He tracks them to Broken Tooth Mountain, where in a cave that reveals itself as a slaughterhouse, Vlad comes face to face with a monster (Dance).  He escapes, but not before two of his men have been claimed by the creature.  Returning home, Father Lucien (Kaye) advises Vlad of the creature’s origins, and its vampiric nature.  They decide to keep their knowledge a secret between them.

A Turkish envoy, come to collect his master’s tribute, tells Vlad the Sultan wants a thousand boys for his army.  Vlad wavers over doing his duty to the Sultan and doing what’s best for his people.  When the Sultan’s envoy adds that Mehmet wants a thousand and one boys, and the extra boy should be Ingeras, Vlad is even further torn.  But at the point of giving his son to the envoy, Vlad makes a fateful decision: no boys will go to the Sultan.  War is inevitable, but Vlad seeks a way to avoid his people being decimated by the Turkish hordes.  He returns to Broken Tooth Mountain where he confronts the vampire and asks to share in his power.  The creature agrees but stipulates that if Vlad is to drink any human blood in the next three days then he will be cursed as a vampire forever, and unable to be fully human again.

When the Turks march on Castle Dracula, Vlad goes out to meet them alone… and he decimates their forces.  With a greater army on the way, headed by Mehmet himself, Vlad orders his people to move to a monastery high up in the mountains, somewhere it will be difficult for the Turks to attack directly.  A surprise attack leaves Mirena and Ingeras in peril, but Vlad saves them using his newfound powers.  The next day, at the monastery, suspicions over Vlad’s new powers leads to him being attacked by his own people.  He survives to rebuke them, telling them that what he has done is because of them, and that they should be concentrating on Mehmet’s approaching army.

Arriving just before dawn, the Turkish forces are met by Vlad but they prove to be a decoy for a smaller force that gains entry to the monastery and targets Mirena and Ingeras.  With their fates intertwined with his, Vlad is forced to make a decision that will affect all their lives, and bring him face to face with his boyhood friend.

Dracula Untold is yet another reboot of an established and well-defined character that seeks to make them look less like a monster and more like someone who has to be bad in order to do good (this year’s Maleficent is another example).  It’s a strange phenomenon in the movies these days, almost as if moviemakers feel they have to apologise for these characters’ behaviour.  It also ends up rendering them relatively anaemic (excuse the pun) in comparison to their original incarnation.  And so it proves with this reimagining of the Dracula story.

While the initial idea is sound – show how Vlad Tepes, Transylvanian prince and hero to his people became Dracula, bloodthirsty monster feared by all – the movie fumbles its way through its attempts to create an origin story partly based on historical fact and partly on romantic fiction.  Vlad is shown as a peaceful man reigning in a vicious, cruel capacity for violence but even though we see the the results of his warlike nature – the infamous impalings on the battlefield – it’s hard to associate the two differing temperaments.  As played by a suitably brooding Evans, Vlad is a bit of a wimp in the opening scenes, browbeaten by the Turkish envoy and then dismissed by Mehmet in a scene where Vlad pleads for clemency in relation to the thousand boys.  Vlad doesn’t appear the proud leader of men he’s meant to be, but more an easily cowed man with no stomach for a fight.  It’s only when he saves his son and kills some of Mehmet’s men that he shows some mettle.

It’s here that Dracula Untold finally becomes a vampire movie, reintroducing Dance’s withered creature, and setting up a future storyline if the movie is as successful at the box office as Universal hope it will be (they have a modern Monsters Cinematic Universe in mind).  The bargain is made, allowing the inevitable tragedy of such a bargain to begin playing out.  Vlad tries to deny his thirst for blood while Mirena marvels at the disappearance of his battle scars.  And in a scene of limited ferocity and actual bloodshed, Vlad takes on a thousand Turks and kills them all.  But it’s all done at a remove, with the intensity of the situation dialled down a notch or two, and Vlad’s predicament reduced to the level of suffering occasional stomach cramps.  From here, the movie picks up the pace but it’s at the expense of time-related logic and dramatic credibility.

With Vlad needing to defeat Mehmet and his army within three days, the Turks’ ability to travel huge distances in such a short space of time goes unquestioned, while Vlad creates a vampire horde of his own to take them on (would a ruler who truly cares for his people do such a thing even if they were on the verge of dying?).  And the script tries for an ironic twist – Vlad’s fate is sealed by the one person he loves most – that feels hackneyed and short on originality.

Muddled though the movie is for the most part, it’s stronger in its performances.  Evans brings a brutish physicality to the role that suits the warrior Vlad, and he dominates scenes just by being present.  He’s a more thoughtful actor than you might expect from his resumé, and he does his best to offset some of the more florid dialogue in the script, as well as making Vlad a more rounded character.  Gadon also gives a good performance, matching Evans for intensity in their scenes together and making Mirena slightly more than the wife who waits anxiously at home while her man goes off to battle.  Dance radiates a cold disdain as the trapped “master vampire” though his voice retains too much of its recognisable charm to make that disdain truly chilling.  Parkinson proves an adequate match for the demands of a role that could so easily have been more stereotypically presented, while Kaye as Father Lucien has a small but pivotal role that he acquits himself well in (even if some audience members will be saying to themselves, “but that’s Dennis Pennis”).  The only disappointment is Cooper, once again confirming his limited range as an actor, and making Mehmet look and sound like an arrogant jerk.

In the director’s chair, Shore (making his feature debut) uses his experience working in   high-end commercials to provide some impressive visuals – one shot shows Vlad taking on the Turks as reflected in the blade of a sword – and shows a confidence that bodes well for the future if it’s combined with a better script.  He’s clearly comfortable directing actors as well, and the performances are as much to his credit as to theirs.  The photography by John Schwartzman is predictably gloomy, though it avoids the steely gray-blue aesthetic of the Underworld series, and there’s a dramatic if occasionally intrusive score courtesy of Ramin Djawadi that is used to good effect throughout.

Ultimately, Dracula Untold is a bit of a mixed bag, its historical pretensions never fully reconciled with its need to reinvent its title character.  The script – by Matt Sazama and Burk Sharpless – remains jumbled throughout and it’s this lack of focus that hampers things the most.  As an entreé into the revamped (excuse the pun) world of Universal’s collection of classic monsters it’s maybe not quite the start the company were looking for, but it’s also not as bad as it could have been.

Rating: 5/10 – despite some occasionally severe deficiencies in the script, Dracula Untold is a solid, unpretentious reintroduction to the world’s most (in)famous vampire; a good mix of the epic and the intimate also helps but the characters remain at too much of a remove to make us truly care what happens to them.