And so we have another Stephen King adaptation, the third within two months after The Dark Tower and It, and a movie that falls somewhere in between the two in terms of quality. Gerald’s Game may not be as bad as The Dark Tower, but it’s certainly nowhere near as good as It. But what it is, is a huge disappointment, one that forgets the cardinal rule when adapting one of King’s novels: that all the interior stuff that King does so well, doesn’t translate well to the screen. Unfortunately, that’s what takes up most of King’s novel, as unhappy wife Jessie Burlingame (Gugino) finds herself handcuffed to a bed while her previously equally unhappy husband, Gerald (Greenwood), lies dead on the floor from a heart attack. The one major problem? They’re at a deserted lake house, and no one’s likely to happen by any time soon. In fact, it might be a week or more before anyone shows up. And by then? Well, if Jessie doesn’t find a way out of her predicament, then whoever does show up is likely to find two dead bodies for the price of one.

And there you have it: the plot in a nutshell. It’s a slight plot, very simple in its nature, and if you were to make a movie based purely on that plotline and nothing else, you’d have a very short movie (and King would most likely have written a short story). But King wrote a novel, and he gave Jessie an abusive childhood (one more example of his parents as monsters motif) that enabled the basic plot to be expanded upon and Jessie’s plight made all the more resonant for highlighting how trapped she’s been throughout her life, first as a protector to her sister, and then as a trophy wife. More importantly, King is very good indeed at exploring the interior lives of his characters. But again, how King writes, and the detail he provides, doesn’t translate well to the (on this occasion small) screen. But director Mike Flanagan – who gave us the better than average Oculus (2013) and the entertaining if flawed Before I Wake (2016) – along with his fellow screenwriter, Jeff Howard, opts to include Jessie’s back story, but ends up having far more trouble connecting it to her present situation than perhaps should be the case. What the viewer is left with, is a movie that plays connect the psychological dots, but which manages to leave out some of those very same dots.

The basic set up is one we’ve seen many times before, both in novels and the movies, with a couple whose marriage isn’t working as well as it used to (if it did at all), trying to “spice things up in the bedroom” as way of improving things. But it’s obvious from the start that Jessie isn’t as confident about this as Gerald is, and when things become uncomfortable for her she calls a halt. But she’s already handcuffed to the bed, and after a short marital spat where a number of home truths are laid out on both sides, Gerald has a heart attack and dies (let that be a lesson to hypertensives who take Viagra). Cue Jessie having conversations in her head that are shown as hallucinations. Gerald keeps returning to tell her just how bad her situation is, and how unlikely it is that she’ll survive, while she also conjures up a version of herself who is more supportive and willing to do a bit of problem solving in order to keep Jessie alive. Both “characters” function as a part of Jessie’s psyche, which is fractured enough (and very quickly thanks to the demands of the script), but the repetitive nature of their dialogue soon becomes tiring, and any impact they initially have from “being there” disappears just as quickly as they show up.

From this we head off into Jessie’s childhood and the abuse she suffered at the hands of her father, Tom (Thomas). But Flanagan and Howard don’t quite know how to equate the abuse she suffered with the way in which Jessie behaves as an adult; the two don’t connect in a way that would make Jessie’s current predicament that much more affecting. In the end, the movie seems to be more about laying to rest the ghosts of Jessie’s childhood. And once that’s done, then it can get back to the small matter of Jessie being handcuffed to the bed. With that having been decided on, it’s left to Gugino to look increasingly awful thanks to dehydration, and to use an incident from her childhood to spark an idea as to how she can free herself. (Those familiar with the novel may be pleased/repulsed to know that King’s solution has been retained – and it’s not for the squeamish.) 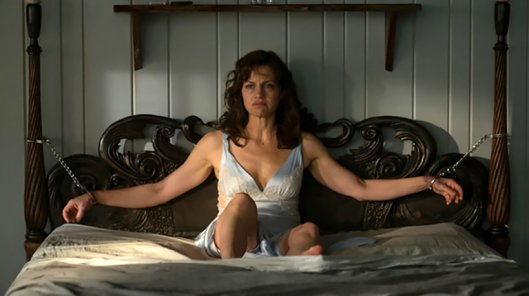 Along the way there’s the added danger of a hungry stray dog who takes a liking to Gerald’s body and who might want to have a taste of “fresher meat”, and a mysterious presence, the Moonlight Man (Struycken), who may or may not be real. The problem with these elements, and many more besides, is that they are all signposted long before they become unveiled, and any suspense is squashed before it has a chance to make itself felt. Consequently, there is very little tension in the movie, and the pacing is erratic, with whole scenes feeling flat and pedestrian in nature. When the movie does pick up the pace, it’s only fleeting, but it still feels as if Flanagan hasn’t got as firm a grip on the material as he should have. He’s not helped by the performances of Gugino and Greenwood, which are serviceable at best, and often hampered by some unappealing dialogue (kudos to Greenwood though: he looks great for sixty-one).

Somewhat predictably, the script can’t help but throw in some referential dialogue to other works by King – the dog is referred to as “Cujo”, Gerald tells Jessie “all things serve the beam” – and there are moments when the promise inherent in the material threatens to break out, particularly with the Moonlight Man, but the wordplay is allowed to dominate, making this a movie that stops on several occasions to allow for lengthy speeches and broad declarations of how bad Jessie and Gerald’s marriage had become, or Jessie’s feelings about her childhood. Flanagan manages the odd flourish here and there, and visually it’s quite robust despite its mostly single set restrictions. There’s also a simple, yet evocative score by the Newton Brothers that does its best to amplify the emotional and psychological components of the script without making them too heavy handed. Good as these things are, though, they’re not enough to prevent Gerald’s Game from being a bit of a letdown.

Rating: 5/10 – yet another King adaptation that could have been a whole lot better, Gerald’s Game is a movie that only occasionally delivers any suspense or tension, and which concentrates more on its central character’s mental health than on tightening the structure of the main plot; earnest and a little bland (and despite the basic premise), this should be a tour-de-force of acting and directing, but instead it falls down way too often to provide the impact it needs.