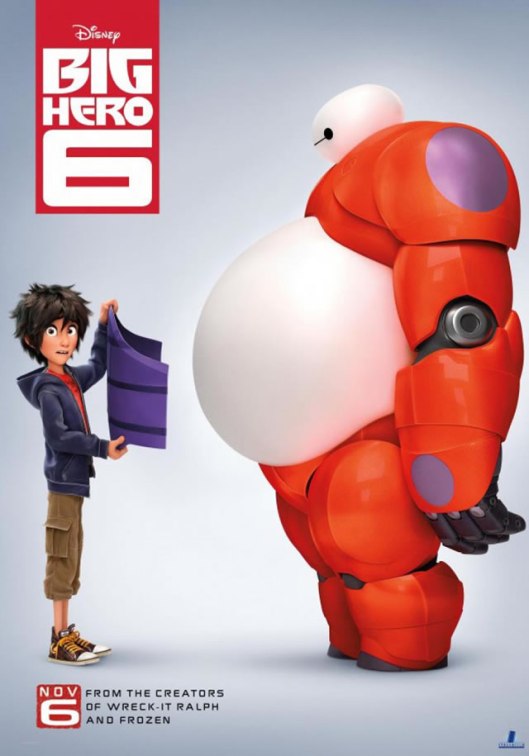 Hiro Hamada (Potter) is a fourteen year old orphan living with his brother Tadashi (Henney) and aunt Cass (Rudolph) in San Fransokyo. He’s a precocious teenager, a genius with robotics who takes part in underground robot fights (and gets himself into trouble). Tadashi believes Hiro is wasting his time and talents, and takes him to the robotics lab at the university he attends. Hiro meets his brother’s friends, Go Go (Chung), Wasabi (Wayans Jr), Honey Lemon (Rodriguez) and Fred (Miller). Tadashi also introduces him to his own special project, a robot called Baymax who provides personal healthcare. Seeing the inventive projects they are all working on, Hiro becomes committed to enrolling at the university.

Hiro works on a project that he can use to apply, and comes up with microbots, tiny robots that can be connected in any way possible via the use of a neural sensor (basically a headband that reads a person’s thoughts and communicates them to the microbots). The head of the robotics department, Professor Callaghan (Cromwell) is sufficiently impressed to offer Hiro a place at the university. Also interested in the microbots is businessman Alistair Krei (Tudyk), but at the urging of Professor Callaghan – who dislikes Krei intensely – Hiro declines his offer to buy the microbots and make a fortune. Later, a fire breaks out at the university; Callaghan is trapped inside and Tadashi rushes in to rescue him. Hiro can only stand by and watch as the building explodes, killing both his brother and Callaghan.

Hiro retreats from daily life. One day he accidentally injures himself. This causes Baymax to activate and try to help Hiro. At the same time, one of Hiro’s microbots comes to life; they soon realise it’s trying to unite with the other microbots, but they should all have been destroyed in the university fire. They follow the microbot to an abandoned warehouse where they discover that someone is mass producing the microbots. Confronted by a man in a kabuki mask who uses the microbots to attack them, Hiro and Baymax manage to escape but not before Hiro realises his project is going to be used for evil purposes.

Hiro upgrades Baymax to be able to fight and equips him with body armour. They track  the microbots to the docks where they encounter the masked man. Before Hiro can instruct Baymax to attack him, Tadashi’s friends all turn up; a chase ensues in which the masked man attempts to kill all of them. They manage to avoid being killed and head for Fred’s palatial home where Fred tells them he believes Krei is the man behind the mask and the theft of the microbots (and the deaths of Tadashi and Professor Callaghan). They use Baymax’s sensors to locate Krei and, kitted out in costumes that allow them to act as superheroes, head for an island off the coast where they discover an abandoned facility that contains the remains of a machine that they further learn was used as a teleportation device. And then the masked man appears, and attacks them all… 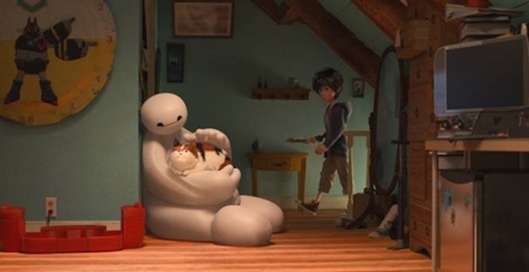 Watching Big Hero 6 – especially if you’re a Disney executive – is a reassuring experience. In the same year that Marvel took a chance on one of their lesser known titles (something called Guardians of the Galaxy), the House of Mouse also took a chance on releasing another Marvel adaptation, a comic book property that had an even lower profile than Star Lord and his pals. The result is a funny, exciting, refreshing, beautifully rendered, heartwarming tale that introduces audiences to one of the most lovable animated characters in recent memory: a rotund primary care robot called Baymax.

It’s a recognisably Disney movie. There’s the standard emphasis on family bonds and the importance of friendships, as well as doing the right thing, but it’s a Disney movie that’s been meshed with the standard tropes of a Marvel origin story, its action heroics and in-house maxim “with great power comes great responsibility” adding an extra layer to the emotional content that makes it more affecting than expected. Given free rein by Marvel to adapt Big Hero 6 in whatever way they saw fit, directors Hall and Williams and screenwriters Jordan Roberts, Dan Gerson and Robert L. Baird have created a movie that is a model of consistent, gratifying entertainment.

Of course, Big Hero 6 would be nothing without Baymax, an irresistibly charming, sweet-natured character who melts the heart and warms it at the same time. He’s a brilliant creation, a soft, cuddly vinyl-formed teddy bear whose personality chip is completely in the right place (where his heart would be – coincidence?). Voiced to perfection by Adsit, Baymax is the kind of friend we’d all love to have: solicitous, kindly, generous, selfless, supportive, and always there for us (it would be a hard heart indeed that didn’t fall in love with him at first sight).

With Baymax proving to be such a wonderful character it wouldn’t have been a surprise to find Hiro lacking in appeal by comparison, but thanks to the very cleverly assembled script, Hiro is as immediately likeable as Baymax is, his scamming at the opening robot fight proving to be a great introduction to a character the viewer can both identify and sympathise with throughout, even when his thirst for revenge for the death of Tadashi threatens to overwhelm his sense of right and wrong. And he’s not as self-centred as most fourteen year olds, having a refreshingly sincere relationship with both his brother and his aunt. And even more refreshingly, the script avoids any notion that Baymax is a replacement for Tadashi; the lovable lug, ultimately, is more than that, fulfilling the roles of brother, friend, and father.

What’s also refreshing is the fact that the villain actually has a good reason for stealing Hiro’s microbots and replicating them. When this reason is revealed it adds yet another emotional layer to the storyline, as well as an unexpected sadness that is amplified by highlighting how much the villain and Hiro have in common. It’s a neat twist on the usual hero-villain relationship, and allows Big Hero 6 to be comprised of more than just the customary bad-guy-out-to-take-over-the-world-and-stopped-by-errant-genius scenario we’re so used to seeing.

The supporting characters are all endearing in their own ways, with Miller’s Fred proving especially likeable (stay til after the end credits for a great “reveal” relating to his dad), and Wayans Jr’s Wasabi often very funny as the constantly risk assessing member of the group. The voice cast are all excellent, with special mention going to Potter and Henney who make their scenes together genuinely touching, and Adsit once more for making Baymax so appealing and irresistible.

As for the animation, the use of new technology means that Big Hero 6 is possibly one of the most beautifully animated movies so far. There’s also a level of detail that is absolutely breathtaking, notably in the scenes that take place on the streets of San Fransokyo. The mix of Eastern and Western cultures is a joy to behold, and very cleverly assimilated, providing a rich visual palette that can be enjoyed time and time again. The character designs are also impressive, with a welcome reduction on the size of the eyes that has hampered the design of so many previous animated characters. And the use of a kabuki mask makes the villain truly intimidating and menacing, augmenting the threat he presents and making him look creepy as well.

With Hall and Williams showing an obvious command of the material, and choosing not to set this in another corner of the Marvel Cinematic Universe, the viewer is free to enjoy the movie for what it is and not where it might fit in to any future Marvel outings. With this potential aspect removed, Big Hero 6 is free to be delightful and entertaining on every level it aims for.

Rating: 9/10 – a winner, pure and simple, continually inventive and captivating in equal measure; Big Hero 6 is yet another triumph from Disney, and is – probably – one of the most visually ravishing, heartwarming animated movies you’re likely to see in this or any year.