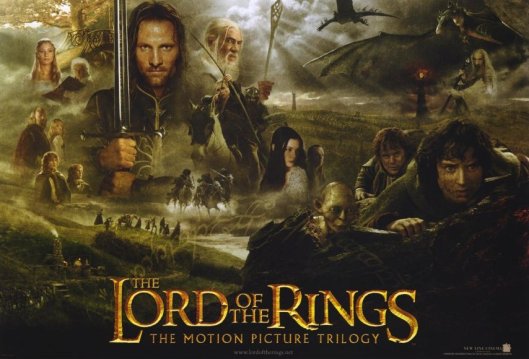 I know, I know, this is a bit of a cheat, three movies for the price of one and all that, but how can you possibly separate the greatest trilogy ever made?

There have been enough superlatives heaped on Peter Jackson’s finest hour(s), and while I’m tempted to add to the pile, I’m going to restrain myself and keep to the personal aspect that makes these movies mean so much to me.  And besides, everyone already knows how brilliant they are (sorry, couldn’t help it).

My first encounter with J.R.R. Tolkien wasn’t via The Lord of the Rings or even The Hobbit.  It was through a friend of mine who was into fantasy art; at his home one day he showed me a picture he’d drawn of a wizard (you can guess which one).  He told me the wizard was one of the main characters in a book he’d read.  He handed me a battered copy of The Hobbit and advised me that if I was going to read it I ought to be prepared for it to be a bit child-oriented.  And me, being a 14-year-old with ideas of being older in my outlook, declined his kind offer and went home instead with the first issue of a new sci-fi magazine called Starburst.

A year later, Ralph Bakshi’s version of The Lord of the Rings was released but I didn’t see it.  My friend the artist did and he thought it was quite good but he also mentioned it wasn’t the whole story.  I thought, “what’s the point of that?” (not knowing then of Bakshi’s plan to finish the tale in a second movie).

And then, in 1981, two things happened that brought me into the fold, so to speak.  My girlfriend at the time was reading The Lord of the Rings and would spend whole evenings working through it; she thought it was “the best book” she’d ever read.  She asked me to read it but I was still hesitant (I was working my way through Dickens at the time and fantasy fiction wasn’t high on my (slightly pretentious) list of genres to  read).  And then on March 8 (a Sunday) the BBC began broadcasting a radio adaptation of Tolkien’s novel in thirty minute episodes that had me glued to my stereo every Sunday for the next twenty-five weeks.  I read the book in between episodes, keeping up with the adaptation.  By the time the broadcasts ended on 30 August I was a Tolkien fanatic.  Now I read The Hobbit, and The Silmarillion.  I raved about the books to anyone who might listen, and later tracked down Bakshi’s movie on video (not as bad as I thought it was going to be; the live-action based animation is actually quite visually arresting).

I re-read the books, revisited the radio adaptation when it was re-broadcast in hour-long episodes in 1982, and generally looked upon the whole mythology that Tolkien had created as being one of the most incredible literary works I’d (eventually) come across.

When it became clear in the late Nineties that a large-budget adaptation of The Lord of the Rings was being planned, with Peter Jackson at the helm, I felt a mixture of anticipation and trepidation.  First of all, it was going to be a live action adaptation, and even though Jackson’s Heavenly Creatures (1994) had proved he could direct something with a bit more depth than say, Braindead (1992), I still had my doubts.  As the scope of the project became known, the more I wondered if, and how, Jackson was going to pull it off.  And over three movies!

Now, thirteen years on, and with Jackson giving us The Hobbit as well, we all know I needn’t have worried.  The Fellowship of the Ring was like the best Xmas present anyone could have.  Its mix of the intimate and the grandeur of Middle Earth, and the level of detail, along with the sheer excitement of the action sequences made for one of the most rewarding cinematic experiences of my whole movie-going life.  In the first two weeks of its release in the UK I saw the movie three times.  When The Two Towers was released a year later, I was itching to see it, especially after watching Fellowship‘s extended version the day before (Jackson’s idea to give us longer versions of each movie on home video was a stroke of genius).  I came out of seeing The Two Towers overwhelmed and buoyed up by the emotional depth that infused the movie, and by the sheer spectacle of the Battle of Helm’s Deep (I couldn’t see how the Battle of the Pelennor Fields could be any better or more exciting; what did I know?).  The following year passed too slowly, waiting for The Return of the King to be released.  When it finally did, I can remember hearing the opening music and feeling a shiver run through me.  Please, Mr Jackson, please, I remember thinking, please have got this right.  And did he.  The Return of the King was an incredible achievement, a massive undertaking in its own right, and the culmination of a saga that had built to this monumental, emotionally-charged conclusion with barely a (hobbit) foot out of step along the way.  (And to those people who feel the movie should have ended with the coronation of Aragorn, the movies have always been about the characters and their journeys; to not see them make their farewells and re-take up their lives would have been a disservice to both them and the audience.)

The Lord of the Rings trilogy remains a phenomenal achievement, with stand-out performances – who can forget Gollum’s schizophrenic argument with himself in The Two Towers? – stunning location photography; a script that never lost sight of the emotional cores of its characters; confident, breathtaking direction from Peter Jackson; special effects that served the story and didn’t overwhelm things; and most of all, the creation of a wholly believable world where all this could happen.  But again, it’s the emotional element that makes the trilogy work, that keeps all of us who fell in love with the movies coming back time and time again, to revisit Middle Earth in all its glory and grandeur.  For many years, a friend and myself would take a day out to watch the extended versions right through, revelling in being able to spend time again with old friends such as Samwise Gamgee and Gimli, son of Glóin.  This trend has (sadly) lapsed in the last few years, but as an added memory to the original, wonderful experience of seeing the trilogy unfold over three magical Xmas’s, it’s easily the next best thing.  Going back to Middle Earth is, in its own way, a little bit like going back home after a long journey away…and what would Frodo and Sam say to that?

Rating: 9/10 – a stupendously impressive piece of filmmaking, bold, inventive, gripping, and with an emotional intensity few fantasy movies ever manage; just as there is only One Ring, Jackson’s enduring achievement means there is only One Trilogy.