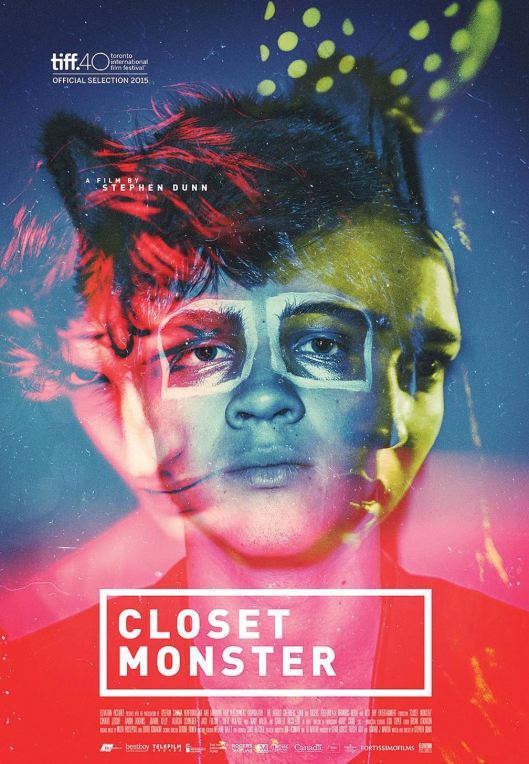 A coming of age tale, Closet Monster seems hell-bent on making things ultra-difficult for its central protagonist, eighteen year old Oscar (Jessup). Not only is his surname Madly – no, really – and not only are his parents divorced, but he’s pretty sure he’s gay, though at this point he’s still pretty much in the closet of the title. As if that wasn’t enough, when he was much younger he witnessed a brutal homophobic attack that left its victim paralysed from the waist down. The combination of these events has left Oscar with mixed feelings about himself, his life, and his sexuality. The only thing he’s sure about is that he wants to be a make-up artist in the movies, and to this end he’s putting together a portfolio that will hopefully get him accepted into a Joe Blasco training centre. He’s helped in this by his best friend, Gemma (Banzhaf), who, as if he didn’t have enough problems, likes him a little too much.

Oscar lives with his dad, Peter (Abrams), and sometimes spends time at his mother’s new home. His mother, Brin (Kelly), has another family now (“the Brady Bunch”), and Oscar still hasn’t forgiven her for being the one to leave. But he’s also got issues with his father, and their relationship is nearly as strained. Add a drab, dead-end job at a local hardware store to the mix, and Oscar has so many problems he could keep a TV soap opera going for months. And then, as if things couldn’t get any more confusing or difficult, Oscar meets Wilder (Schneider), a guy at work, and straight away he’s head over heels in – well, not love per se, but definitely infatuation. The only problem (as if)? Oscar can’t tell if Wilder is definitely gay. What’s a horny, probably gay young man to do?

The answer involves one of Wilder’s shirts and a bathroom cubicle at work, and it’s here that writer/director Stephen Dunn begins to pull together all the jigsaw pieces that make up Oscar’s life. As Oscar indulges in a spot of self-release he experiences flashbacks to the assault he witnessed when he was younger. These images shock him out of his sexual reverie, and point toward the reason why he hasn’t “come out” yet: if he does, what happened to that other teenager could happen to him. It’s a recognisable and understandable fear, and goes some way to explaining why Oscar, through his make-up ambitions (his designs are all heavily influenced by fantasy and horror), retreats so often into a world where he feels safe, and where his best friend isn’t Gemma, but his talking hamster, Buffy (Rossellini).

Yes, that’s right, a talking hamster called Buffy. Now, if at this point you’re asking yourself, can this movie get any stranger, well, yes it can, and it does. But Dunn is canny enough to introduce us to Buffy when Oscar is younger, where a small boy talking and listening to a hamster doesn’t seem so strange. And so well established is Buffy’s presence in Oscar’s interior life, it makes it that much easier to accept when he’s eighteen and still struggling to make sense of things. And the way in which Rossellini brings Buffy to life, so to speak (excuse the pun), is charming and agreeable. And Buffy proves to be pretty much the only source of humour in a movie that’s often deliberately downbeat and angst-ridden.

The movie is based on Dunn’s own experiences of growing up as a gay teenager in Canada, and while it’s probably safe to assume that he’s taken a degree of artistic licence with his own life, there are times throughout the movie where it seems that he’s trying a little too hard in getting across the message that making sense of being gay when you’re a teenager isn’t easy. While this may be true – and the movie goes some way to make sure the audience understands this – Dunn’s message isn’t helped by Oscar being resolutely unsympathetic (and let’s hope Dunn wasn’t like this when he was younger). Yes, Oscar has a lot of problems, and yes, getting out of his hometown will probably go a long way towards helping him get past some of those problems, but in the meantime all he does is act petulantly, antagonise or upset everyone (except Wilder), and generally behave in a selfish, dismissive manner. Though Jessup is very good as Oscar, he can’t quite bring the viewer over to Oscar’s side, and by the time he’s punting his father into a wardrobe and heading off to a party to (hopefully) get somewhere with Wilder, you can’t help but wish for him to experience a massive fail (and in some ways he does).

There are problems too with Oscar’s father, Peter. In the beginning, Peter is the kind of dad every child wishes they had: loving, supportive, and there. But divorce brings out the moody, boozy homophobe in him, and the character quickly descends into a slightly more challenging stereotype than usual, but a stereotype nonetheless. By the time he’s shouting at Brin on the front lawn and the movie is morphing into a David Cronenberg body horror, his transformation is complete, and Oscar’s view of him as Deadbeat Dad has come to fruition. It’s a shame, but you can see why Dunn has chosen to make Peter such a douchebag: it’s one more thing that Oscar has to deal with, and it adds a degree of conflict that doesn’t exist solely within Oscar’s head.

With all this – and more – Dunn’s narrative stumbles from time to time, and certain scenes don’t flow as easily as others. As mentioned already, Jessup is very good as Oscar, and even if he can’t make him sympathetic, he does make his predicament a credible one. There’s fine support from Abrams, who does his best to ground Peter even when he’s behaving badly thanks to the script, and Schneider as Wilder, who may or may not be gay, or straight, or bisexual; neither Dunn nor Schneider makes any attempt to confirm Wilder’s sexual orientation, and this ambiguity is something that strengthens the movie and makes the potential in Oscar and Wilder’s relationship all the more intriguing.

Dunn has made a movie out of his own personal experiences that looks and feels like the fevered imaginings of a kid in great need of psychiatric help. Oscar behaves foolishly and without due care for the people around him, and the movie doesn’t offer him any happiness, which amounts to a bitter pill indeed – for Oscar, and the audience. It’s a movie that paints a portrait of an angry, confused young man, then puts him through even more of an emotional wringer than he’s already been through, and finally offers him a way out through the experience of a waking nightmare. It’s a tough love movie about a teenager who doesn’t know how to love, and thanks to Dunn’s confidence as a director, where his script lets him down, he’s able to compensate by showing us Oscar’s world as he sees it: compromised, disheartening and frightening. And unfortunately, that’s a world that many teenagers will recognise.

Rating: 6/10 – Dunn the screenwriter lets down Dunn the director too many times for Closet Monster to work completely, but there are enough good ideas and directorial flourishes for Dunn to be someone to keep an eye on as their career unfolds; slow-paced but aided by a terrific soundtrack and some effective, roving camerawork courtesy of Bobby Shore, the movie has enough thought behind it that it shouldn’t be dismissed as superficial, and is surprisingly rewarding despite its flaws.

An accomplished, award-winning actress, Ingrid Bergman was also an inveterate diarist and she kept hours upon hours of home movie footage across all three of her marriages, along with thousands of photographs. She charted her life and career through these recorded memories, and would often find herself looking back at favourite moments whenever the mood took her. And thanks to all this “memory hoarding”, Bergman has provided the platform on which movie maker Stig Björkman has assembled a captivating, insightful documentary on the star herself.

Told in the style of a not-quite linear autobiography, Ingrid Bergman in Her Own Words offers a succession of affecting, candid scenes from Bergman’s life that are punctuated by talking heads recollections from her children and others, and Vikander reading the actress’s personal letters and diary entries. Bergman’s childhood and close, formative relationship with her father is covered, as are her first excursions in front of the camera in a series of Swedish movies. Her first marriage to brain surgeon Petter Lindström reveals a young woman on the brink of stardom and enjoying every aspect of the Hollywood experience that would ultimately see them split up.

From this, it becomes clear that Bergman was committed more to her career than she was to her daughter, Pia, a circumstance that carried on when she had her children with Roberto Rossellini. Whether this was a conscious choice or not isn’t made clear but it does speak to Bergman’s desire to act above everything else. It also helps to explain how she was able to leave Hollywood for Italy and a period in her life when she was pilloried in the press for “abandoning” Petter and Pia. From there the movie covers the late Forties and her career resurgence thanks to Anastasia (1956), and her third marriage to theatrical producer Lars Schmidt. An inevitable collaboration with fellow Swede Ingmar Bergman on Autumn Sonata (1978) follows on, until her death from breast cancer in 1982.

The movie stresses Bergman’s dedication to her career (a little too much at times), but it also highlights just how much she enjoyed life and made as much of it as she could. Her children’s thoughts often provide an alternative viewpoint, but their love for her is evident throughout, even though she was largely an absent presence in their lives (all of them wish they could have had more time with her, but don’t begrudge her absence at all). The various archival elements are compiled with a great deal of care, and are fascinating for their candour and historical relevance. It all goes to prove that, despite some controversial (for the time) personal decisions, Bergman was admired and respected by pretty much everyone she came into contact with.

Rating: 7/10 – as a straightforward, no frills documentary, Ingrid Bergman in Her Own Words works incredibly well in spite of lacking any appreciable depth, but Björkman assembles the varied materials with skill; a knowing and affectionate tribute to an actress who David O. Selznick referred to as “the most completely conscientious actress” he had ever worked with, this is for fans and newcomers alike.