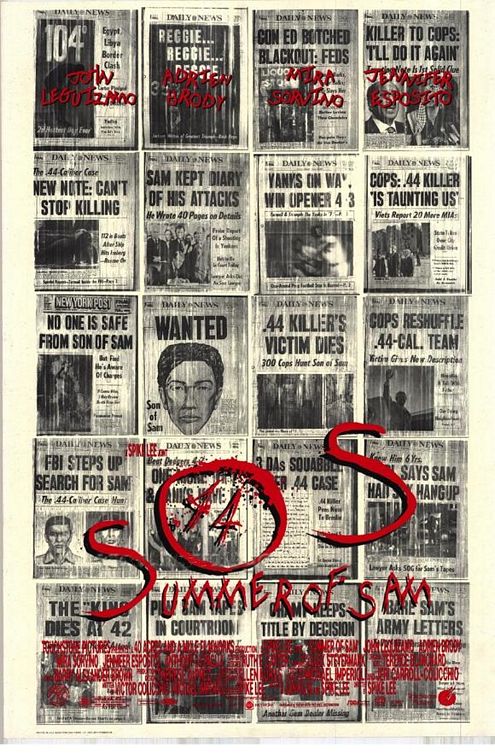 New York City, 1977. The serial killer known as Son of Sam (Badalucco) is terrorising the city, randomly shooting people. He sends taunting messages to the police who are no nearer to catching him after seven murders than they were after the first. Against this backdrop, a group of friends try to make sense of what’s happening as well as trying to deal with their own problems. Vinny (Leguizamo) is a hairdresser working in the Bronx. He’s married to Dionna (Sorvino) but cheats on her every chance he gets. His best friend, Ritchie (Brody) has adopted a punk lifestyle, complete with spiked hair and punk clothing. It bothers Vinny and the rest of their friends, but proves attractive to Ruby (Esposito), who’s treated poorly by everyone else because she’s perceived as “easy”.

With the police struggling to make any headway in the Son of Sam case, the lead detective, Petrocelli (LaPaglia) approaches local crime boss, Luigi (Gazzara) for help in catching him. His men begin compiling a list of suspects, an idea that spreads throughout the neighbourhood and which is taken up by Vinny’s friends, led by Joey T (Rispoli). Suspicious of Ritchie’s new lifestyle, they add him to their list. Meanwhile, Vinny and Dionna’s marriage is unravelling. Vinny is still seeing other women – including his boss, Gloria (Neuwirth) – and he’s flirting more and more with drugs. He and Dionna are invited to a gig that Ritchie’s band is playing at CBGB’s but Dionna refuses to go inside. Vinny suggests they go to Studio 54 instead but they’re not able to get in. A photographer (Savage) who’s coming out of Studio 54 takes a liking to Vinny and they go with him to Plato’s Retreat, a swingers club. There, Dionna and Vinny have sex with other people, but on the way home Vinny becomes resentful and accuses Dionna of being a “lesbian freak”. Outraged by his accusation (and his double standards) she reveals she knows about his affairs and leaves him stranded at the side of the road.

Ritchie’s relationship with Ruby, however, is going from strength to strength, even though he dances at a gay club and prostitutes himself with the clientele. When Brian (Garito), one of Vinny’s friends, discovers this and tells Joey, it serves to make Ritchie more suspicious in everyone’s eyes, and when an artist’s impression of Son of Sam is published in the newspapers it looks enough like Ritchie for Joey to believe he is the killer. With Dionna having ended things with Vinny, and his reliance on drugs taking over his life, he’s persuaded by Joey to lure Ritchie out into the street where he can be attacked by his “friends”. But what none of them realise is that the police have made a breakthrough in the case, and that a terrible injustice is about to be carried out.

Filmed in and around the actual areas where David Berkowitz killed six people and wounded seven others between July 1976 and July 1977, Summer of Sam is a jarring, hedonistic movie that paints an hallucinatory portrait of the time, and which acts like a fever dream of desire and mistrust. It’s a scurrilous, profane movie, sometimes scabrous and full of bile, as its characters deal with their own personal hells, all potent counterpoints to the madness experienced by Berkowitz. It deals with themes of betrayal and promiscuity, xenophobia and suspicion, and is unforgiving in its attempts to shine an unforgiving light on the social mores of the time.

The time period is recreated with verve and attention to detail (though it does get quite a few of the punk-related details wrong), and Ellen Kuras’ cinematography captures the vibrancy of the era, as disco battled with punk, and misogynism and distrust maintained a firm stronghold in Italian neighbourhoods. The lighting often makes scenes, and especially interiors, look grimy and slightly soiled, a trenchant reflection of the characters and their rude approach to life and each other. Lee explores and exploits the late Seventies with gusto, ramping up the intensity of the emotions and the spirit of the times, and encouraging a handful of career-best performances from his cast. The movie benefits enormously from its depiction of the fear and terror people felt in the wake of Berkowitz’s murderous activities, and the closed-minded vigilantism that grew out of them.

The movie generates such a speed and a momentum that it propels the viewer toward its denouement with alacrity, and through the machinations of Vinny and his friends, with undisguised relish. All this leads to a movie that operates at such a pitch that there’s little room for subtlety or tenderness. However, Lee’s confident handling of the narrative more than compensates for any rough handling or delirious imagery. When the heatwave of the time results in a power outage which in turn leads to rioting and vandalism, it’s depicted with a torrid matter-of-fact quality that it fits in completely with Lee and co-scripters Victor Colicchio and Michael Imperioli’s aggressive, no holds barred approach to the various storylines.

Lee is incredibly well served by his cast, who enter into things with complete commitment. Leguizamo, one of the most prolific and versatile actors working today – he currently has five movies in various stages of post-production – puts in a career best performance, expertly displaying the narcissistic selfishness of a man who projects strength but who is battling his fear of commitment every day. It’s a riveting portrayal, and even when he’s not the focus of a scene the viewer’s eye is drawn to him, as if at any moment he’s going to demand their attention again. He’s matched by Sorvino, whose quiet, unassuming portrayal of Dionna in the movie’s early stages gives way to a gutsy, impassioned performance that matches Leguizamo’s for emotional ferocity. Like her co-star, it’s a career best outing, and it’s a shame that post-Summer of Sam she’s not appeared in any movies that have allowed her to shine as she does here.

Brody offers strong support though he’s given less and less to do as the movie progresses, while Esposito suffers the same fate. Badalucco is an imposing presence as Berkowitz, and sharp-eared viewers will recognise John Turturro’s voice as Harvey the Dog (who tells Berkowitz to “kill”). LaPaglia’s detective flits in and out of the narrative (and is nowhere to be seen when Berkowitz is arrested), Gazzara coasts as the local mob boss, and Savage is on screen for all of a minute. The soundtrack consists of a great mix of contemporary songs alongside Terence Blanchard’s driving score, and there’s terrific use of The Who’s Baba O’Riley two thirds of the way in to accompany a brilliant montage (another song by The Who, Won’t Get Fooled Again, is used near the end for another very dramatic sequence, but it’s not as effective).

Rating: 9/10 – Summer of Sam won’t be to everyone’s taste, but it is one of Lee’s most daring, uncompromising movies, and has a charge that few other movie makers could achieve or maintain over such a long running time; demanding and uncompromising, it’s a movie that doesn’t pull any punches and is all the better for it.