In the wake of the 9/11 terrorist attacks on the Pentagon and the World Trade Center, the US government began asserting that Al-Qaeda and Osama Bin Laden had been aided by Iragi leader Saddam Hussein. This was at odds with the perceived wisdom that Bin Laden was operating out of Afghanistan, and despite an on-going mission to bomb him and the country “back to the Stone Age”. With most of the mainstream media, including publishing giants such as The New York Times and The Washington Post accepting the government’s “shoddy intelligence” as fact, it was only the likes of independent news service Knight Ridder journalists Jonathan Landay (Harrelson) and Warren Strobel (Marsden) who challenged the government’s stance, and did their best to expose the neo-con conspiracy that wanted to manufacture a war with Iraq. Supported by their editor, John Walcott (Reiner), Landay and Strobel strove to find evidence to contradict the government’s assertions that Hussein had weapons of mass destruction, and that this was the excuse being used to support the call for war, a call that had no basis in fact… 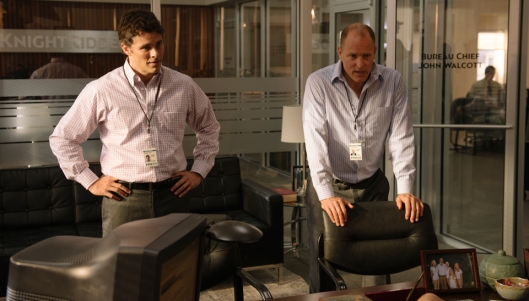 Recently, the journalist Carl Bernstein tweeted, “This is worse than Watergate, because the system worked in Watergate.” Of course he’s referring to the current situation with Donald Trump as President, but his remark could equally apply to the state of play following 9/11. After Watergate, the Republicans began managing the mainstream news media in a way that can still be seen today, and the post-9/11 watershed in political reporting is a perfect example of how government manipulation of the truth – or outright lying, if you prefer – was aided and abetted by the news corporations. But if you’re looking for a savage indictment of this kind of behaviour then Shock and Awe is not the place to find it. Instead, the movie flits between scenes of rote exposition and misjudged solemnity as it tries to exploit a situation where one group of journalists were outmanoeuvred by the Bush Administration, and their message was undermined by not getting it out to the public in as wide a manner as was needed. So what we have is a movie that deals with failure but not in an outraged, we-demand-justice kind of way, but in a poor-naïve-us kind of way that just isn’t attractive. 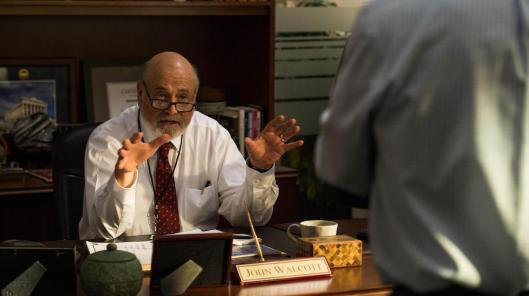 It also tries to be more than it has to be by including a distaff side to things through the paranoid (yet correct) assertions of Landay’s Yugoslavian wife Vlatka (Jovovich), and an awkward, should-have-been-jettisoned-from-the-get-go boy-meets-girl scenario involving Strobel and his neighbour, Lisa Mayr (Biel) (the scene where she recounts a potted version of fourteen hundred years of Iraqi history has to be seen to be believed). These episodes sit uneasily between scenes of Landay failing to charm various sources, and Strobel continually doubting if what they’re discovering is right. Added to this is a clumsy sub-plot involving The Philadelphia Enquirer not running any of Knight Ridder’s stories when they contradict the government, and the inclusion of veteran war reporter turned State Department official Joe Galloway (Jones), whose sole purpose seems to be to provide pithy comments about the duplicitous nature of his bosses. It’s all a huge, uninspired, unworthy, and unrelentingly mediocre movie with no fire or energy, and which uses a disabled soldier (Tennie) to make a thumpingly obvious point about the waste of men and resources once the US got to Iraq. Harrelson and Marsden are unlikely reporters, and Reiner overdoes his serious, flinty editor role, but it makes no difference as there’s not one relatable character in the whole movie. Is there any shock and awe? Yes, but only at how bad it all is.

Rating: 4/10 – you know your movie’s in trouble when its best performance is given by George W. Bush in archive footage, but that’s just one of the dilemmas that Shock and Awe fails to overcome; with no sense of outrage to build on or to, and by telling a story that’s too little too late, the movie lacks a purpose or a workable design, something that should have been spotted right from the start.

Thomas (Brühl) is a documentary filmmaker who becomes interested in making a movie about the media circus surrounding the trial for murder of student Jessica Fuller (Gaunt), who, with her boyfriend, is accused of killing her roommate. He meets journalist Simone Ford (Beckinsale), and she provides him with the background material he needs in relation to the murder and the people involved. As Thomas begins to look into the case he finds himself focusing on the ways in which the spotlight has caught Jessica in its gaze, and how the media have lost sight of the victim. He determines to make his movie about this (perceived) injustice, and begins to interview the various players.

In doing so, Thomas meets a young English student, Melanie (Delevingne). She helps him with introductions within the community that Jessica is part of, but by this stage he’s already finding it difficult to write his script, and his frustration has led to him drinking heavily and taking drugs. When Thomas is introduced to Francesco (Invernizzi), who appears to know too much about the murder, and who Thomas believes is involved, it leads him to try and solve the mystery of the murder, and what exactly happened to Jessica’s roommate. But Thomas finds himself increasingly adrift in the town where the trial is taking place, and begins to have trouble sifting reality from fantasy, as his drink and drug use causes him to become desperate to find the truth.

Michael Winterbottom’s career has always been an interesting and very often challenging one. He’s a director who’s unafraid to take risks – 9 Songs (2004), The Killer Inside Me (2010) – and his ability to genre hop and still maintain an impressive track record of movies, is unimpeachable. However, he does sometimes trip up, and for every 24 Hour Party People (2002) there’s a Genova (2008), and sadly, despite the movie’s real-life background and inspiration – Barbie Latza Nadeau’s book Angel Face – The Face of an Angel falls into the latter category.

While it’s refocused look at the Amanda Knox trial gives the movie a sense of immediacy, it’s overwhelmed by the decision to make Thomas’s gradual emotional and intellectual disintegration more important than the story he’s looking into. The movie’s initial examination of the machinations and narrow-sighted approach of the media soon gives way to Thomas’s increasingly fevered, personal investigation, and the possibility that Francesco is the real killer. Alas, by doing so, Winterbottom and writer Paul Viragh commit the same sin they’re seeking to expose at the beginning, and lose sight of the victim as well. What doesn’t help is that Thomas, despite Brühl’s best efforts, is charmless and unlikeable, and this makes it difficult for the audience to engage or sympathise with him. Beckinsale is underused, while Delevingne delivers a fresh, natural performance as Melanie.

Rating: 4/10 – unbearably arch at times, with the character of Thomas continually placed in situations where he’s clearly out of his depth, The Face of an Angel is an unnecessarily glum, and surprisingly tedious, outing from the usually reliable Winterbottom; the location photography is a much-needed bonus, and the basic idea is sound, but in its execution, the movie strays too far from its own agenda.