Hardwick House is an orphanage that’s run on a tight rein by its headmistress, Miss Adderstone (Manville). Sour and unlikeable, and disliking the children in her care, she has to contend with Molly Moon (Cassidy), a constant thorn in her side, and someone for whom getting into mischief – deliberately or not – seems to be a way of life. When Molly discovers a book on hypnotism at the local library, she uses it to begin making life at the orphanage that much better. But she’s drawn toward living a better life far away, and travels to London, where she tricks her way into replacing incredibly famous Davina Nuttel (Evans) as the star du jour. But she’s being pursued by would-be arch-criminal Nockman (Monaghan), who wants to use the book as a means toward robbing a diamond house. Will Molly thwart Nockman’s plans, and in the process, will she abandon her friends at Hardwick House altogether…?

Based on the 2002 novel by Georgia Byng, Molly Moon’s Incredible Book of Hypnotism is a lightweight adaptation that hits its marks with all the energy and bounce of a movie that knows it’s not quite going to measure up in the entertainment department. This is despite a plethora of generous acting performances by a talented cast who all know what’s required of them, and a script that doesn’t skimp on making it seem as if being an orphan isn’t really that bad. Molly’s adventures in London – becoming a mega-star overnight, saving a friend, Rocky (Carnelly Morris), from the perils of middle class adoptive parents, and foiling Nockman’s plans – are played out in a day-glo fantasy world of crude ambition and guilt-free wish fulfilment. That it stays just on the right side of amiable and is even (whisper it) enjoyable for the most part, is a tribute to the invested cast and director Rowley’s simplistic approach to the material. It lacks depth – something that’s not unusual in these circumstances – and avoids presenting its target audience with anything that might be recognised as real life. But this is part of its charm, and though it relies heavily on adult caricature and Molly’s authority-defying behaviour, it’s pleasant enough, and at times, funny in a way that children will enjoy far more than the grown ups.

Rating: 6/10 – targeting its intended audience with almost laser precision, Molly Moon and the Incredible Book of Hypnotism will amuse and entertain those of a pre-teen persuasion, but older viewers won’t be so impressed; a great cast helps the script overcome some serious narrative hurdles, and the whole thing breezes along like a modern day fairy tale – just with manufactured magic. 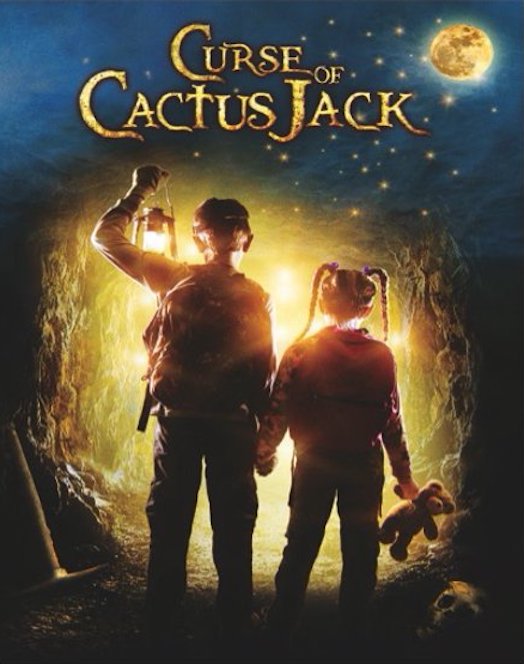 Billy and Katie live with their parents (Seever, Van Lith) and their grandfather (Etter). When their mum and dad aren’t paying attention – which is often – their grandfather regales them with tales of the Old West, and in particular, the legend of Cactus Jack, a gold prospector who found what was said to be the most lucrative gold mine of all. Fearful of his find being taken away from him, Jack never revealed the location of his mine, though he left behind a bunch of keys and a map with cryptic clues as to its whereabouts. Now in their grandfather’s possession, he hands them over to Billy and Katie. The next day, while their parents are at work, Billy and Katie determine to find the mine and Cactus Jack’s long-hidden horde. Using the map and its clues, they realise that the mine is near to where they live (conveniently), and soon find an entrance that leads them into the mine and the first of many obstacles put in place by Cactus Jack. Risking their lives, they venture further and further into the mine, and discover the reason why the mine is known as the curse of Cactus Jack…

A tightly budgeted adventure movie for kids, Curse of Cactus Jack is an Indiana Jones-style feature that pits its intrepid siblings against a variety of deadly obstacles, but makes itself somewhat redundant in terms of actual peril thanks to the script’s decision to make almost every snag and hindrance solvable through the use of one of the keys (conveniently) left behind by Cactus Jack. This might hamper the effectiveness of the narrative, but it’s ultimately of little consequence thanks to the casting of real life siblings Billy and Katie Kitchen. The pair are most definitely a team, supportive of each other (though Billy does get to mention that he’s “been a great brother” a little too often to avoid sounding as if he’s crowing about it), and on the same page throughout. There’s no sibling rivalry here, no bickering or complaining, and while it fits with the overall blandness of their characters, it’s refreshing to see them just getting on with it all. Against this, mum and dad are the parental equivalent of Bobble Heads, grandpa speaks as if he’s just stepped out of the Old West himself, and there’s a supernatural element that sits uncomfortably amongst proceedings as if the story really needed it (it doesn’t), but this is a pleasant enough diversion, and its target audience will most likely be pleased to see two pre-teens being so proactive and capable.

Rating: 6/10 – something of a one-man show – director McMahon is also the co-writer, co-producer, cinematographer, editor, and post-production supervisor – Curse of Cactus Jack is amiable and inoffensive, but also enjoyable for being a basic, no frills kids’ adventure movie; first-timers the Kitchens are acceptable as the movie’s protagonists, but if there’s one character that steals every scene he’s in, it’s Scooter Bear – now let’s see him get his own movie.