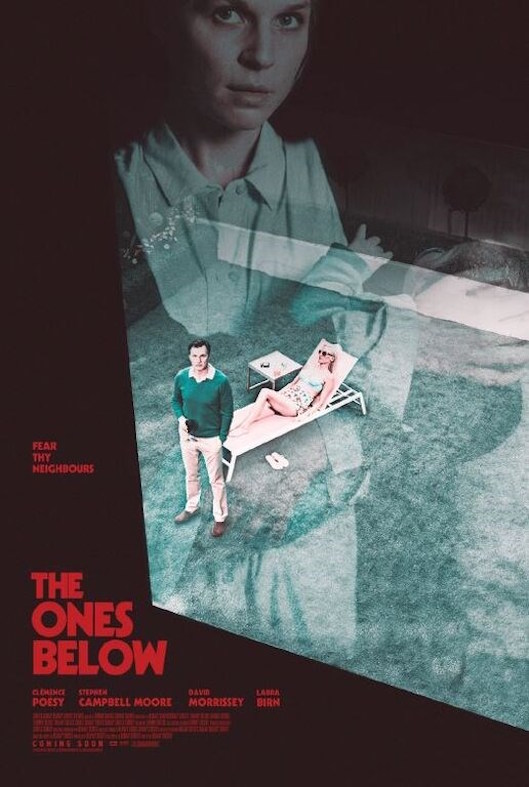 Kate (Poésy) and Justin (Moore) are expecting their first child. They live in an upstairs flat, have a comfortable lifestyle, and appear to be secure in their relationship. But Kate has doubts about her suitability as a parent, and these doubts plague her so much that she fears she won’t bond with her baby when it arrives. Justin does his best to reassure her, but Kate’s doubts linger. Kate gives birth to a son, but once she’s home she finds her fears coming true and dealing with a newborn begins to take its toll.

The arrival of new neighbours in the flat below, Jon (Morrissey) and his pregnant Scandinavian wife Teresa (Birn), offer a distraction, and the two couples begin to get to know each other. Jon is a successful businessman who seems aloof and manipulative, his treatment of Teresa appearing controlling and stern. Kate and Teresa bond over Kate’s son, and the husbands seem to get along as well. But at a dinner party held by Kate and Justin, and after a few drinks too many, Teresa reveals to Kate that she is afraid of Jon; shortly after, Jon forces her to leave early. Their friendships continue to develop but at a subsequent dinner party, again held in Kate and Justin’s flat, a terrible accident occurs and Teresa falls down the stairs. As a result she suffers a miscarriage.

The next day there is an angry exchange between the two couples, and Teresa tells Kate that she doesn’t “deserve that thing inside you!” Jon and Teresa leave soon after for Europe, but retain their lease on the flat. Kate and Justin continue with their own lives, and try to put things behind them. And then one day she comes home to find shoes outside the door to the downstairs flat – Jon and Teresa are back. When the two couples eventually run into each other, Jon and Teresa reassure Kate and Justin that they harbour no ill will over the circumstances of Teresa’s miscarriage, and just want to move on with their lives.

However, Kate soon becomes paranoid about what she believes is their true motive in returning, which she thinks is to undermine her relationship with her child, and in time, steal him away from her. Justin is disbelieving, but Kate’s increasing paranoia leads her to find ominous portents in the simplest of Jon and Teresa’s behaviour, particularly as Teresa has taken to helping Kate with her son, babysitting for her and allowing her to regain some of the life she’d thought she’d left behind. Kate becomes suspicious of Teresa’s help, and eventually this leads to her breaking into their flat in the hope of finding something that will prove she’s not being delusional, but when she does it leads to not only a terrible confrontation but the culmination of her worst fears.

A fertile little thriller with dark psychological overtones, The Ones Below arrives in cinemas after having been well received at the 2015 Toronto and London Film Festivals. And yet, while it maintains a chilly (mis)demeanour throughout its commendably brief running time, certain narrative missteps cause the movie to fall short of achieving its full potential. Part of the problem is that Kate’s mental acuity is questionable from the start and despite rare moments of contentment, she never seems as if she’ll ever banish her concerns over being pregnant, and what the future will hold once she’s given birth. With a character who’s already struggling with a form of paranoid delusion, the idea that she might be suffering psychological torment thanks to her grieving neighbours is never in question.

So instead of a movie where the audience is never sure if Kate has cause to be paranoid over the actions of her neighbours, the issue is never in doubt, and the script by writer/director Farr tips its hand far too early thanks to the decision to tap into unnecessary thriller conventions, and by having David Morrissey look menacing even in moments of repose (some actors should not be cast in certain roles). Jon and Teresa behave oddly from the start, and while some of their actions can be construed as “normal”, we’re still in thriller territory, and with all the expectations that go with that, expectations that Farr doesn’t really know how to circumvent. Once the baby is born and the grieving couple return, we all know what’s going to happen next, and if the details are somewhat sketchy, we still know the inevitable outcome.

By making the outcome so predictable, Farr lessens the impact of the good work he puts in in the movie’s first half, where marital tensions are kept simmering away in the background, and the idea of domestic violence in leafy suburbia adds a frisson of apprehension as to how the movie will pan out. In these early scenes, Poésy does well to keep Kate’s emotional fragility from defining her completely, and her scenes with Moore are cleverly staged to show the distance that is growing between them as a couple (Justin clearly hopes the baby’s birth will bring them closer together again). The introduction of Jon and Teresa, an outwardly fun-loving couple who seem to have (almost) everything they need, serves to highlight Kate’s increasing unhappiness, and the fault lines in her marriage to Justin. Farr keeps his characters on an emotional knife edge during this period, but once Teresa suffers her miscarriage, the movie drops any pretence about its intentions, and what has started out as a quietly disturbing examination of one woman’s alienation from herself, abandons this approach for the narrow confines of a thriller.

With the narrative making several attempts to wrong foot the viewer from this point on, The Ones Below becomes a game of cat and mouse between Kate (not crazy), and Jon and Teresa (certainly amoral) as she and the viewer begin to work out what Fate has in store for her, and her son. Morrissey ramps up the menace while Birn invests sunning herself on a lounger with as much unease as she can muster. It’s all staged with aplomb but as intimidating behaviour goes it’s remarkably lightweight, and speaks more to budgetary constraints than it does to narrative embellishments (and the viewer can see Morrissey standing in the rear garden only so many times before it becomes tiresome).

With the material and the plotting getting bogged down by Farr’s need to hurry things along, the movie loses traction and aims for the kind of subtlety-free denouement that leaves the viewer in no doubt (again) as to what’s happened – and why – and abandons any attempt at leaving the viewer in two minds as to whether or not Kate has imagined it all, or if there’s a darker, less obvious reason for the events she’s caught up in. If Farr had managed to inject some much needed ambiguity into his script, things would have been a whole lot better and more rewarding. As it is he’s served well by his cast, and by Birn in particular, and the movie’s best feature is an unsettling score by Adem Ilhan that is almost like a character of its own, supplementing the darker emotions on display, and allowing Farr to create a greater sense of unease when Kate’s paranoia runs riot.

Rating: 6/10 – with aspirations to be a better than average domestic thriller, The Ones Below sees first-timer Farr maintain an uneasy grip on the narrative, but steadfastly avoid providing the audience with anything to keep them off guard; by the time we see Teresa travelling to her new home, any surprises are unlikely and the final reveal has been signposted well in advance, leaving the viewer to wonder if the joke is on them rather than Kate.