Fresh from the countryside, D’Artagnan (York) hopes to follow in his father’s footsteps and become a King’s musketeer. His initial efforts are less than promising: he’s knocked out and robbed by the Comte de Rochefort (Lee), an agent of Cardinal Richelieu (Heston), he manages to insult three of the very musketeers he wants to join, and he ends up duelling against all three of them in turn until the Cardinal’s men arrive to arrest them. The other musketeers – Athos (Reed), Aramis (Chamberlain), and Porthos (Finlay) – take the fight to the Cardinal’s men, and with D’Artagnan’s aid, defeat them. This leads to D’Artagnan being taken under their wing just as the Cardinal hatches a plot to embarrass the King (Cassel) and Queen (Chaplin). With the Queen having given her former lover, the Duke of Buckingham (Ward), a necklace as a keepsake – and one that the King gave her – D’Artagnan and his new companions elect to travel to England to retrieve the necklace before it’s to be worn at a ball. But matters are complicated when Milady de Winter (Dunaway), another of the Cardinal’s agents, steals two of the necklace’s diamonds…

Originally intended by Lester as a vehicle for the Beatles, The Three Musketeers was also originally meant to be a three-hour epic (including intermission), but when it became clear that it wouldn’t make its release date in that format, the decision was made to split the project into two movies (The Four Musketeers followed in 1974). The sequel/second half is a more sombre affair, some of it necessarily so, but this first movie is a blast, a riotous panoply of silly humour, even sillier sight gags, and some of the best swordfights ever committed to the big screen. Energetic, vibrant, and poking fun at everything it can with an insistence and a panache that even the hardest of hearts would be hard-pressed to deny, the movie is the quintessential romp, an action adventure movie with a surfeit of heart and a knowing sense of its own absurdity. Everyone involved is so obviously having fun, you want to join them and buckle your swash in the same exciting fashion as they do, leaping and spinning and pivoting, and killing the Cardinal’s men with flair and passion. If you take nothing else away from Lester’s movie, you have to applaud the swordfights – choreographed by master swordsman William Hobbs – and the breathtaking energy that infuses them all. Whatever else happens – and George Macdonald Fraser’s screenplay adheres closely to Dumas’ novel – it’s the action that elevates the material and ensures its entertainment value. 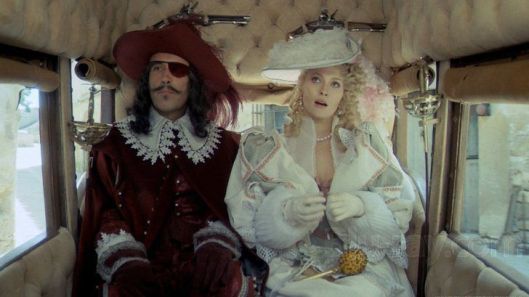 Lester and his talented cast may be looking to make sure everyone stays happy and smiling throughout, but he also makes the peril facing the Queen (and unsuspecting King) sufficiently serious to ensure that the movie’s comedy credentials aren’t the only thing on display. Richelieu’s dastardly plot, and the machinations of Milady de Winter (a spirited Dunaway), drive the narrative forward with a telling urgency, and though this slows down the action, the committed performances keep the audience from noticing the movie’s need to focus on the plot for a while. The relationship between the three musketeers and D’Artagnan is also given room to evolve, and even though Fraser comes close at times to making it seem perfunctory, York et al invest their characters with a great deal of heart and sincerity. As well as comedy and drama, there’s romance too in the form of D’Artagnan’s attraction for Constance (Welch), the Queen’s dressmaker who somehow makes a virtue out of being clumsy (full marks too for Miriam Brickman, the uncredited casting director who paired Welch with Spike Milligan; he’s her screen husband). With all the elements working extremely well together, and propped up by an exciting story told in exciting fashion, Lester’s one-time Beatles project reveals itself as a fun time to be had by all.

Rating: 9/10 – easily the best version of Dumas’ classic tale, The Three Musketeers is endearingly odd in places (or maybe oddly endearing), deliberately silly in others, and an absolute pleasure to watch – whatever is going on; a rip-roaring piece of unbridled entertainment, it’s funny and fresh, pays more attention to period detail than you might expect, and has absolutely no more ambition than to provide its audience with as good a time as possible, something in which it succeeds with consummate ease.

Rating: 6/10 – an online game of Truth or Dare quickly escalates into something more dangerous than expected when Vee (Roberts) decides to escape her comfort zone and take on the game’s challenges; less than subtle criticisms of the Internet and social media can’t hide the fact that this kind of scenario – teens (mostly) take risks to become “cool” in the eyes of the world – lacks immediacy and a real sense that its characters are in any actual danger, leaving Nerve to flirt with its ideas but never really take them out on a first date.

Rating: 5/10 – in New York in 1926, young wizard, Newt Scamander (Redmayne), arrives with a case full of fantastic beasts (what else?) and finds himself in the midst of an evil plot to boost Warner Bros.’ take at the box office; despite being written by J.K. Rowling, Fantastic Beasts... is littered with characters we never get to know, clumsy demarcations between the wizarding world and that of the Muggles (or No-Maj’s as they’re known here), features another tedious series of destruction-porn episodes, and fosters the overwhelming sense that, despite protestations to the contrary, this is a franchise cash-in and nothing more.

Rating: 6/10 – when a curse threatens the island she lives on, chief’s daughter Moana (Cravalho) goes in search of the one person who can put things right: the cause of the curse, demi-god Maui (Johnson); following on from the delightful (and fresh) Zootopia (2016), it’s shocking to see just how lightweight Moana is in comparison, with little depth to the characters, and a plot so flimsy it’s almost see-through, all of which leaves the movie’s stunning animation as the only thing that makes an impact. 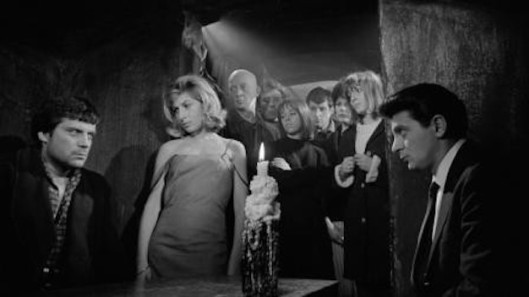 Rating: 7/10 – an American businessman (David) comes to London to persuade his fiancée (Lynn) to return home and get married, but he finds himself battling against her friends (led by Reed’s anti-Establishment poser), and her sudden disappearance; seen today, The Party’s Over has all the hallmarks of a Sixties curio, but at the time it pushed quite a few boundaries, and fell foul of the British censors, forcing Hamilton to remove his name from the credits – but not before he’d made a fascinating and striking movie that’s only let down by a handful of weak performances and an ending that matches them. 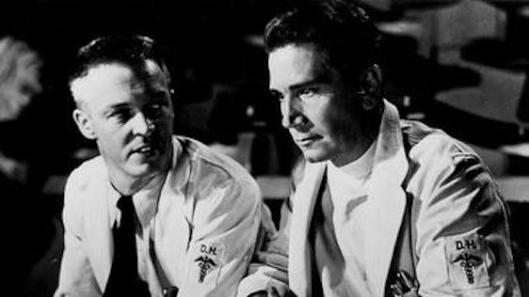 Rating: 6/10 – the murder of a doctor at New York’s Bellevue Hospital prompts the police to place three undercover officers there in an attempt to flush out the killer; beginning with an awkward endorsement of the Bellevue staff by Conte (whose inability to read from cue cards is obvious), The Sleeping City soon settles into its film noir trappings but while it’s diverting enough, it doesn’t know what to do with Conte’s lead detective, or how to make its central plot more interesting than it is. 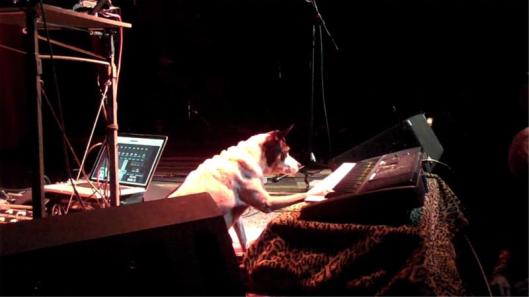 Rating: 8/10 – a tone poem, an essay, a treatise on the unconditional love a dog has for its owner, and a wider examination of grief and loss allied to the events of 9/11 – this isn’t just about Laurie Anderson’s relationship with her beloved rat terrier, Lolabelle, but about the various ways that love and loss can affect us; at its core, Heart of a Dog is not a documentary, but a collage of distressed film stock, abstract sound and sound effects, Anderson’s performance persona, visual memories, heartfelt imagery and reminiscences, poetic reality, and Anderson’s own unique view of the world and the essential poetic nature of it all, all of which combines to provide the viewer with one of the most intriguing and thought-provoking movies of recent years.

Rating: 7/10 – the Black Ace is a master criminal/murderer who predicts the time he’ll kill each of his victims, and he never fails, but crime writer Neil Broderick (Morris) is on his trail, and with the help of Black Ace expert, Thornton Drake (Stephenson), is determined to catch him; an old dark house mystery that features light relief (or major annoyance – take your pick) from the double act of McHugh and Jenkins as two of the stupidest cops on the force, Tomorrow at Seven does a good job of playing cat and mouse with the audience, but with so few suspects on display, the identity of the Black Ace is, sadly, all too obvious.

Rating: 6/10 – Sally (Annis) comes to London to be a model, and soon falls in with a like-minded group of young women looking to find their way in the world – and have a lot of fun at the same time, even though it doesn’t always work out like that; though the focus is in on Sally, her friends, and the various relationships they form, The Pleasure Girls makes more of an impact thanks to its male cast, with McShane, Eden and Kinski (very good) all standing out thanks to strong characterisations and having less soap opera-style dialogue than that of the female cast, and O’Hara’s direction appearing to wander whenever two or more of the girls are on screen. 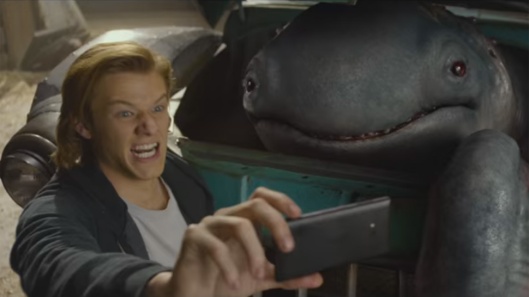 Rating: 7/10 – an oil-drilling operation leads to the release of three “monsters” that live deep underground, but while the oil company captures two of the creatures, the third ends up befriending high school senior, Tripp (Till), who in turn helps it to avoid being captured as well; an innocuous throwback to the kind of fantasy movies made for kids in the Eighties, Monster Trucks is a lot of fun if you let yourself just go with it, and though its message of tolerance and understanding of “foreigners” seems at odds with current notions of US nationalism, it’s still a message we can all stand to hear one more time. 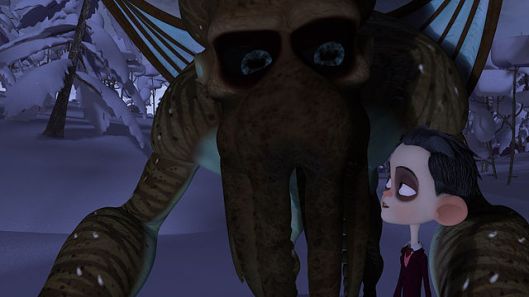 Rating: 5/10 – young Howard Lovecraft (Kiefer O’Reilly) finds himself transported to a strange kingdom of ice which is inhabited by equally strange creatures, and where he finds himself searching for both a way back, and a way to reassure his father (Nicol) (who’s locked up in an asylum) that his ravings about other worlds and said creatures are all true; a curious blend of children’s animation and H.P. Lovecraft’s Cthulhu mythos, Howard Lovecraft and the Frozen Kingdom is quite straightforward in its approach, but is let down by poor production values, an animation style that makes it look like a video game from the Nineties, and a script that juggles motivations and dialogue like a one-handed man in a chainsaw-catching competition.

Rating: 4/10 – the world is in peril from yet another technological McGuffin, and it’s up to extreme sports enthusiast/secret agent Xander Cage (Diesel) to save the day; with Diesel unable to get The Last Witch Hunter (2015) off the ground as another franchise earner, it’s no surprise that he’s returned to a character he left behind fifteen years ago, but this is as uninspired and as predictable as you’d expect, and only Yen’s (always) impressive physicality makes any kind of an impact.