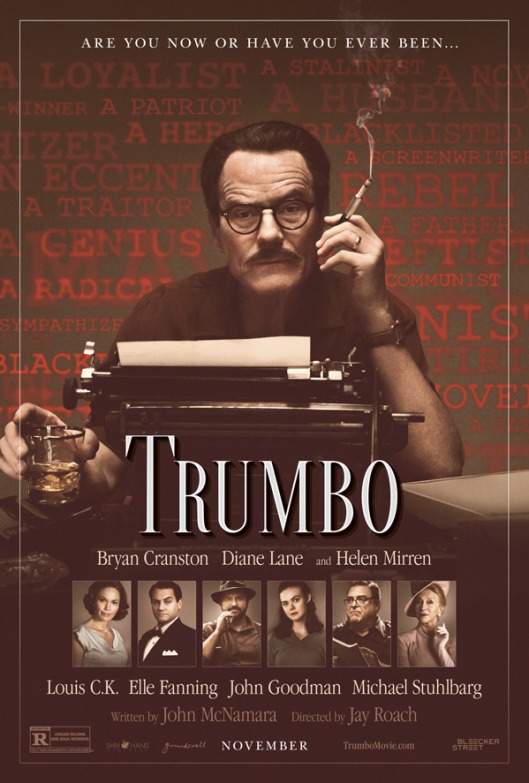 Anyone with a passing interest in the history of Hollywood will probably have heard of the Hollywood Ten, a group of screenwriters and directors who were cited for contempt of Congress for refusing to state their affiliation (if any) with the Communist Party. They stood up for their First Amendment rights only to find that the government wasn’t listening; as a result they were fined and given prison sentences ranging from six months to a year. Hollywood exacted a further penalty: none of the ten would be allowed to work in the industry and their names would be added to the Blacklist, a list of actors, writers, directors and other industry professionals who were regarded as communists and traitors to the American way of life.

This ignominious period in American political and entertainment history is the backdrop for Trumbo, a look at the life and experiences of one of the Hollywood Ten, and the ways in which he managed to subvert the Blacklist. Beginning in 1947, the movie charts the attempts by the Hollywood establishment to fall into line with the political manoeuvrings of people such as stockbroker and US Representative J. Parnell Thomas, and to not appear out of step with the paranoia of the time. Against this, screenwriter Dalton Trumbo (Cranston) tries to marshal his “comrades” in an effort to rebut the accusations made against them, and with the likes of Edward G. Robinson (Stuhlbarg) in support, prepares to defy Congress and to refuse to cooperate at the hearings. 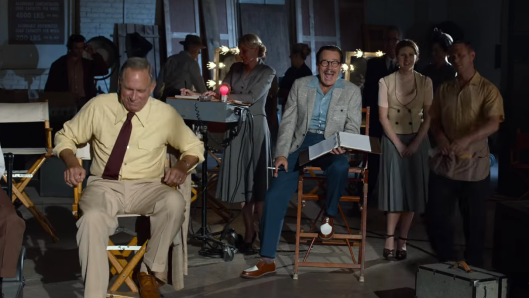 The movie shows how some of the Ten, including Arlen Hird (Louis C.K.) – a character created to represent several of the original members – have their doubts about this course of action, but they are persuaded by Trumbo, and their time before Congress leads to the ruination of their careers. Matters are made worse when supporters such as Robinson give their names to the enquiry, and the extent of the Blacklist begins to be felt once their gaol terms are completed. Hird becomes ill, while Trumbo does his best to support him. Still needing to write, Trumbo writes a screenplay that he gives to his friend Ian McLellan Hunter (Tudyk) to sell to the studios. The script is bought by Paramount and the movie made from it, Roman Holiday (1953), goes on to win an Oscar for its screenplay.

The irony isn’t lost on Trumbo, and when he’s approached by King Brothers Productions, headed by Frank King (Goodman), to produce screenplays for them (under pseudonyms of course), he jumps at the chance. However, a combination of King’s demand for scripts and Trumbo’s own exhausting work ethic leads to an estrangement from the rest of his family: wife Cleo (Lane), eldest daughter Nikola (Fanning), son Chris, and youngest daughter Mitzi. He ropes them in to be his support team, delivering scripts and rewrites whenever needed and refusing to see that they have their own lives to lead. In time, they begin to rebel against his dictatorial attitude.

As rumours of Trumbo’s involvement with King Brothers begins to spread throughout Hollywood, efforts are made by columnist Hedda Hopper (Mirren) to expose him. The release of The Brave One (1956) with a script by Robert Rich (in reality Trumbo), adds fuel to the fire, especially when it too wins an Academy Award for its screenplay. With Trumbo’s profile becoming even more pronounced than it was before the Blacklist, he finds himself working for both Kirk Douglas (O’Gorman) (on Spartacus) and Otto Preminger (Berkel) (on Exodus). Both men are willing to ignore the Blacklist and give Trumbo screen credit, but not before they have to deal with the possibility of anti-Communist boycotts of their movies and widespread industry disapproval.

In recounting Trumbo’s story, Jay Roach’s movie plays very much like every other Hollywood biopic you’ve ever seen. It moves at a steady pace, ticks all the important boxes when recounting/explaining the motives of the House Committee on Un-American Activities, shows how deeply the Blacklist affected the lives of its victims, and recounts Trumbo’s subsequent attempts to remain gainfully employed in the town that had turned its back on him. In short, it sticks to a very traditional formula and rarely strays from it, even down to the idea that Trumbo would have befriended a black fellow inmate in prison (Akinnuoye-Agbaje) (an example of his pro-egalitarian approach to people and politics). It’s only when see him at home, bashing out screenplay after screenplay, that the movie offers us something different from the standard notion of a writer struggling to maintain his career. Here, Trumbo is shown to be a bit of a monster – indifferent to his wife, dismissive of his children, and so self-absorbed he can’t see the damage he’s doing.

But like a lot of things that happen in the movie, this self-absorption and bad behaviour is easily remedied, and then it’s on to the next hurdle. For this is what Trumbo the movie is comprised of: a series of hurdles for the writer to clear. Sometimes he does so with inches of room to spare, at other times he knocks them down on his way to the finish line, and occasionally he doesn’t even realise the hurdles are even there. And he does it all with wit and panache and a fondness for the odd bon mot. For someone dealing with the issues that Trumbo had to deal with – and his pseudonym dependency issues aside – his movie incarnation never really seems to be affected by what’s happening around him. Sure he’s outraged, and sure he’s angry at the injustice of it all, but all too often the movie makes it sound like it’s all just a big intellectual challenge for him, and one that he can easily outmanoeuvre.

As the screenwriter who did some of his best work in the bathtub, Cranston gives a rasping, eloquent portrayal of a man who never loses sight of his principles, even when everyone around him is either trying to deny they exist, or castigate him for having them. It’s an award-worthy performance but one that lives or dies on Cranston’s likeability in the role, and it’s good that he is very likeable. But then so is everyone else, even the “villains” like Mirren’s vicious Hedda Hopper; there’s no one you really take exception to. In this sense, John McNamara’s screenplay becomes all surface sheen and lightweight drama, with none of the varied emotions that must have been felt by all concerned at the time. 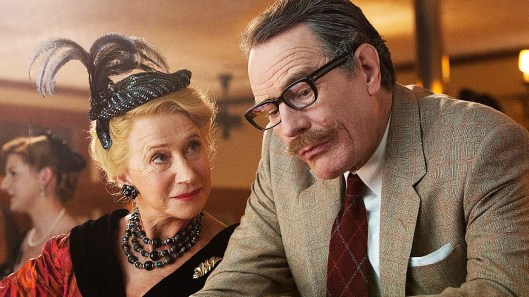 By arriving with an air of detachment (whether deliberate or not), and an ironic detachment at that, Roach has crafted a movie that is effortlessly watchable but which falls short of being compelling. We follow Trumbo on his journey from celebrated Hollywood screenwriter to… well, celebrated Hollywood screenwriter via a couple of detours, and though we know it probably was rough, that doesn’t come across. Still the performances are a large measure of the fun to be had (Mirren, Goodman and Stuhlbarg each bring their A-game), and the period setting gives Daniel Orlandi a chance to shine in the Costume Design department. One aspect that does work? The inclusion of archival footage from the HUAC hearings, a salient reminder that people like Ronald Reagan were quick to distance themselves from their friends and colleagues under the threat of censure. What times they were, and what a shame that Trumbo isn’t quite the movie to show us just how bad they were.

Rating: 7/10 – full of unrealised potential, Trumbo is an easy watch when it should have been more engrossing and, in terms of the political witch hunt that occurred at the time, able to invoke the viewer’s ire with ease; Cranston is on fine form and he heads a more than capable cast but this has to be filed under “missed opportunity”.