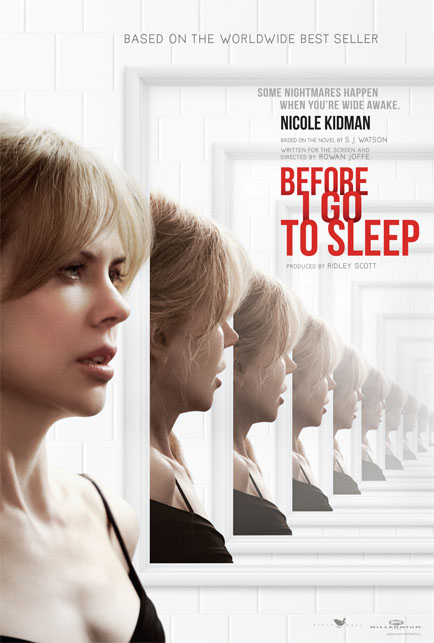 Christine Lucas (Kidman) wakes up each morning with no knowledge of who she is, and no memory of her life since her early Twenties.  Her husband, Ben (Firth), tells her she was in an accident ten years before and she is suffering from a form of retrograde amnesia: when she goes to sleep each night, her memory of that day is wiped clean and she remembers nothing about her situation.  To help her, Ben has put up pictures of their life together, and has left lists of items and instructions to help her get through the day while he’s at work.

After Ben heads off, the phone rings.  A man at the other end identifies himself as Dr Nasch (Strong).  He tells Christine he’s been treating her for a while and that she should go and look for a camera hidden in a wardrobe in the bedroom.  Nasch has persuaded Christine to use the camera as a kind of video diary, an aide-memoire that she can use each day to help her remember things.  The last entry shows Christine looking visibly upset and cutting the recording short when Ben returns home.

Two weeks before: Dr Nasch begins treating Christine and gives her the camera, advising her not to tell Ben about it.  She begins to make daily recordings, and in the process she learns things that don’t make sense: her accident proves to be a near-fatal assault by an unknown attacker; she and Ben have a dead son; and a friend of hers called Claire (Duff) has been trying to get in contact with her (though Ben tells her he doesn’t recall anyone by that name).  As Christine begins to piece together the mystery of the assault and the past ten years, she begins to suspect that someone, either Ben or Dr Nasch, is hiding the truth from her, and that she may be in danger.

Adapted from the novel by S.J. Watson, Before I Go to Sleep is a hard movie to really like.  It’s competently directed by Joffe, ably performed by its cast, and wrong foots the audience on at least two occasions with considerable shrewdness.  But it lacks any real tension, and despite the best efforts of all concerned, has a too-familiar feel to it that robs the movie of any lasting effect.  Christine’s predicament and the limitations of her memory, while intriguing, are too easily overcome; it’s hard to believe that no one’s come up with the idea of a video camera before now.  And for the purposes of the plot, Dr Nasch’s insistence on keeping Ben in the dark, while highly suspicious by itself, seems more of a contrivance than something reasonably developed to aid in Christine’s treatment.

Once Christine begins to unravel the mystery of the assault, the clues come thick and fast, and while the movie as adapted by Joffe may think it’s being very clever, it only succeeds in making it easy for its heroine to learn the truth.  It also loses a large amount of credibility when Christine agrees to meet Claire at Greenwich, but is later revealed to not even know the address of where she lives.  It’s in the mid-section that Joffe trots out a series of twists and turns that threaten to sink the movie’s credibility, but he manages to hold it all together until the arrival of the more generic confrontation that, alas, soon descends from tense showdown to tiresome violent retread.

Later, as the plot begins to unravel further, and the truth about the assault becomes clearer, what has been a fitfully absorbing psychological thriller becomes yet another damsel in distress movie with Christine forced to face off against the man who assaulted her all those years ago.  With such a predictable denouement, the movie adds an extended coda that seeks to give full closure to everything Christine has discovered (it also provides an emotional resonance that’s lacking elsewhere), but while it’s an effective scene in and of itself, it comes too late to save matters overall.

There’s also the issue of the movie’s look.  Joffe, along with director of photography Ben Davis, has chosen to film in muted colours, and with the dimmest lighting design seen for some time.  As a consequence, the movie is drab and depressing to look at, its dour interiors sucking the life out of proceedings and proving an obstacle to the performances, the cast struggling to stand out against the morose and dreary surroundings.  Even when Christine meets Claire at Greenwich, the colour mix is toned down so that the natural greens and browns seem as subdued as the rest of the palette.  As a reflection of Christine’s mental state, it comes across as pretty heavy handed, while also keeping the audience at a distance from the action.

Kidman plays Christine as a fragile, easily disturbed, yet strangely trusting woman who shows only few signs of being the strong, confident person she was before the assault (it’s only her memory that’s affected, not her personality), and while she’s as capable as ever – only Julianne Moore can show dawning, horrified realisation as well as Kidman can – she’s hemmed in by the character’s limitations (even an actress of Kidman’s calibre can do shock and surprise only so many times in a movie without it becoming repetitive).  In support, Firth gets to play angry and resentful in between being supportive and creepy, while Strong does what he can with a character who, ultimately, is there for exposition purposes more than anything else.

There are obvious connections that viewers will associate with Memento (2000), but Before I Go to Sleep lacks that movie’s inventiveness and if they were programmed as a double bill, Joffe’s would definitely be the second feature.  With obvious nods to movies such as Groundhog Day (1993) and Shattered (1991), this tries hard to be a riveting thriller but ends up looking and sounding too mundane to make any lasting impression.

Rating: 5/10 – disappointing and routine for most of its running time, Before I Go to Sleep could have done with more pace and more intensity; with few surprises, and even fewer moments to make an audience gasp, this is one thriller that doesn’t fully live up to expectations.