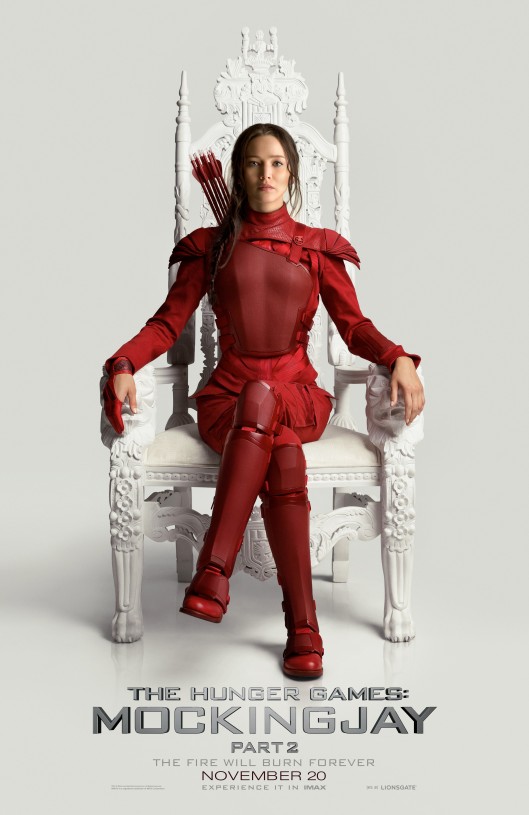 Picking up after Peeta’s failed attempt to kill Katniss, the final instalment in The Hunger Games series begins with a problem for both the makers and the audience to consider: should the movie launch straight into the rebels’ expected attack on the Capitol, or should it hold back and spend some time reiterating the relationships between Katniss and Peeta and Gale, and begin to explore the similar machinations of President Snow and his potential successor, Alma Coin? The answer is the latter, and while this decision allows for further layers to be added to Katniss’s ever-present self-doubt (and sets up the ending), it also has the effect of reminding the viewer that we’ve been here before – and in each of the three previous movies.

One of the series’ strengths has always been the way in which Katniss appears to be a stranger to herself while everyone around her finds her actions entirely predictable. It’s an idea that continues here, with the Mockingjay being used at every turn, even when she acts independently. But it’s in danger of becoming as unwieldy a plot device as the idea that President Snow has a camera in every home in Panem (as well as in every shop, and on every street corner… you get the idea). We get it. And if the decision to split Mockingjay the novel into two parts was so that the final movie could be all about the rebels’ final push on the Capitol, then why are we still going over old ground? 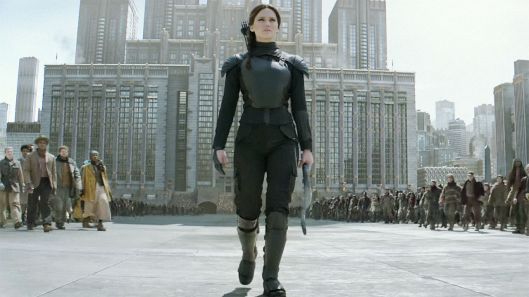 To be fair, it’s the price the movie makes for being faithful to Suzanne Collins’ source material. But what it also does is to make The Hunger Games: Mockingjay Part 2 longer than it needed to be, and curiously sapped of urgency once Katniss et al begin their progress toward the Capitol. There are too many scenes where characters stop to muse on their individual plights, and Peeta tries to sort out if his memories are real or lies constructed by his torturers in the Capitol. At first glance it’s all meaningful, and yet another indication of how careful the makers have been in grounding the action, but do you know what? It’s Part Four – we already care about these characters. All we want now is for Katniss to come face to face with President Snow, and for the promise of all those booby traps we’ve seen in the trailer to give us a thrilling, rousing, edge-of-the-seat kick-ass end to everything.

What we’re looking for is the kind of series’ ending we got with Harry Potter and the Deathly Hallows Part 2 (2011), but the action sequences, though expertly staged and choreographed – and which winnow out the surplus characters – just… don’t… bring it. It’s a strange awareness to have, to realise that the best action scenes have all appeared in the earlier movies, but there it is: even the underground fight against the Capitol Mutts suffers from over-familiarity as Katniss shows off the same bow skills we’ve seen before from Legolas and Hawkeye. And as mentioned before, there’s a distinct lack of urgency to it all, as the movie’s rhythm is maintained at such a steady pace that even when Katniss and her comrades are out-running a booby-trap at full pelt, you can sense the editing team of Alan Edward Bell and Mark Yoshikawa making sure it’s not shown at too full a pelt or their hard work elsewhere might be jeopardised. 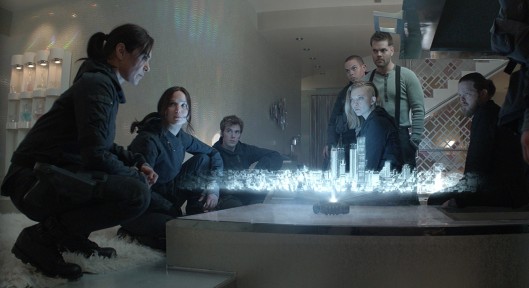 And yet, somehow – somehow – the movie overcomes these drawbacks and proves to be a fitting end to the saga. It’s still an intelligent, and intelligently made, movie, and the effort in maintaining the good work achieved in the previous movies is clear to see, with returning director Lawrence once again steering things to tremendous effect. He’s aided by a returning cast who all clearly want to be there, and who are committed to ending the series as best they can. And for the most part, they succeed. Lawrence doesn’t put a foot wrong as Katniss, miring her in doubt and misplaced guilt, and keeping her insecurities to the fore in a performance that becomes all the more impressive for having been sustained across four movies. Hutcherson impresses the most (four words I didn’t think I’d ever write), his PTSD Peeta being a difficult role to pull off, but he makes short work of it, and in doing so, makes Peeta the most sympathetic character in the whole series.

Completing the “romantic threesome” is Hemsworth as Gale. Four movies in and he’s still the series’ one weak link, an actor so stiff he could throw himself at the enemy instead of shooting them, and still score a death. (Now if Sam Claflin had played Gale, then the often tepid romance with Katniss might have been more compelling.) Sutherland continues to play Snow with effortless malice; without his silky venom to play against, the rebellion would have appeared less than necessary. As his rival for power, Moore strikes a more strident note as Coin, and as Coin’s true nature becomes more and more clear, the actress withstands the temptation to become the series’ answer to Cruella de Ville (the clue’s in the hair). 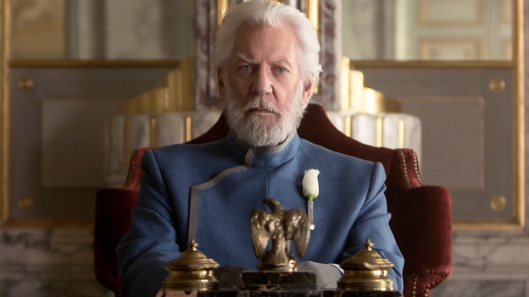 Further down the cast list, Harrelson is sidelined early on; the late, great Philip Seymour Hoffman has a few scenes that hint at a bigger, if obviously curtailed role; Claflin brings his trademark smirk to playing Finnick Odair, as well as a much needed sense of fun; Banks hangs around on the periphery of things as Effie; and Tucci is shoehorned in as Caesar Flickerman in a TV segment that goes against an earlier scene where Snow (very severely) chastises an underling. Everyone is present and correct, and director Lawrence coaxes good performances from everyone, making it incredibly easy for the audience to continue rooting for their favourite characters.

Whatever your feelings about The Hunger Games franchise – and there are plenty of nay-sayers out there – this has been one of the most surprisingly intelligent and well produced projects of the last ten years. Jennifer Lawrence has proved to be an inspired choice as Katniss Everdeen, and the world of the Districts has been so convincingly constructed that the plight of their inhabitants has been echoed by events taking place in the real world even now. And even though Suzanne Collins originally wrote her novels for the YA market, these are remarkably adult movies, with a strong sense of moral culpability and responsibility. A triumph then, and when all is said and done, one that few of us could have seen coming.

Rating: 8/10 – narrative hiccoughs aside, The Hunger Games: Mockingjay Part 2 is still head and shoulders above any other dystopian YA sci-fi series out there, and is a great showcase for what can be achieved if the intention is not to soft pedal any serious themes inherent in the material; thrilling (just) and chock-full of great performances, this is a fitting swansong to a series that has surprised and entertained audiences for four years and this despite getting increasingly bleaker as it’s gone along.