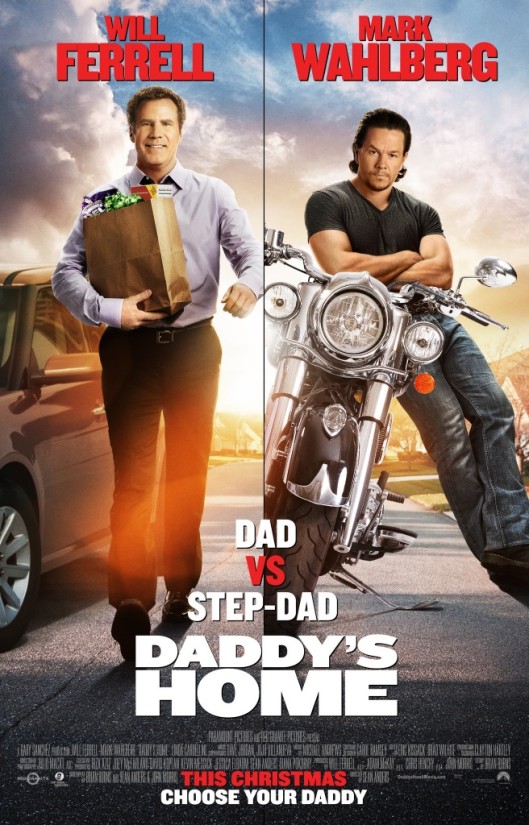 Sometimes it’s easy to dismiss a movie when it appears formulaic and predictable, or has the same actor portraying the same kind of character they always do. And sometimes that’s okay because it’s the cinematic equivalent of comfort food. One such actor is Will Ferrell, who’s made a very successful career playing a man-child in a succession of comedies that have made a lot of money if never quite gaining critical approval (in short, the public likes him so the critics don’t matter). Ferrell rarely strays from playing this kind of character, and if he does it’s not very often; the last time Ferrell tried anything different was in Everything Must Go (2010).

And so he’s back in Daddy’s Home, as Brad Whitaker, a stepdad desperate to win his stepkids’ love and affection, and putting in the extra time and effort to do so because he can’t have kids of his own. Facing an uphill battle – his stepdaughter, Megan (Estevez) keeps drawing family pictures where Brad is shown either dead or dying – he begins to earn their respect and a confirmed place in their lives when, out of the blue, their biological father, Dusty Mayron (Wahlberg), calls up and Brad finds himself inviting Dusty to visit. Despite several warnings from his wife, Sara (Cardellini), that this isn’t a good idea, Brad assures her everything will be fine.

Now, up until this point, Ferrell does manage to portray a slightly different variation on his usual character, and Brad is a more confident (albeit naïve) person who knows what he’s doing. But with the arrival of Dusty, it’s back to normal as Brad’s confidence goes out the window, and Ferrell ramps up the childish and confused behaviour as Brad attempts to outdo Dusty for being cool. Of course, his efforts mostly backfire – moving Dusty’s motorbike allows for a quick succession of visual jokes – and he receives less and less support from the people around him as Dusty’s friendly nature and willingness to help others makes Brad look second-rate.

It’s obvious that Dusty is there to break things up between Brad and Sara, and the issue of Brad’s infertility is brought up time and again as a potential wedge between them, while bedtime stories about the king who returns to his castle to find an evil step-king ruling his people is stretched beyond its natural lifespan. Dusty’s efforts to undermine Brad’s role are purely of the “great gift” variety, such as the treehouse he builds in a day along with a skate ramp (he’s not averse to bribing his kids with cash to earn their loyalty, either). Against this, Brad’s efforts appear paltry and ill-advised. But when he tries to play Dusty at his own game, it leads to public humiliation and estrangement from Sara. Now it’s up to Dusty to prove he can be the kind of father that Brad is.

The Ferrell movie template is adhered to pretty closely as his character’s initial security is well established, only to be undermined or reversed with predictable ease. As Brad struggles to regain his position as head of the family, Ferrell can’t resist slipping back into the kind of character motifs he’s used over and over again in the past, from inherent cowardice to inappropriate boasting to emotional shallowness. By now, each feature Ferrell makes is like a greatest hits movie, allowing the audience to tick off familiar moment after familiar moment. 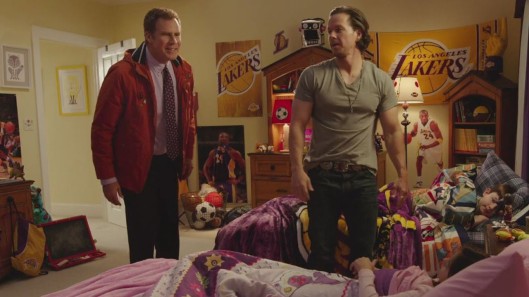 But does it all work with Daddy’s Home? The answer (predictably) is yes and no. The movie does have its moments, with Brad’s alcoholic meltdown at a basketball match proving a particular highlight, but there are still too many times when the humour is slowed down by muddled attempts to advance the (very slight) storyline, or to indulge in the kind of verbal sparring that drags on for far too long and to increasingly little effect – here it’s in a scene at the radio station where Brad works and features the man himself, his boss Mr Holt (Church), and a secondary character called Griff (Buress). The idea is there but the execution lacks both pacing and humour, leaving the viewer to wait patiently until it’s over.

There’s also a subplot involving Dylan (Vaccaro), Brad’s other stepkid, and his being bullied at school. It leads to a scene where Brad and Dusty compete to give him the best advice about dealing with the situation, but it drags on too long and loses all sense of momentum (or purpose). There is a payoff later on in the movie, and it is one of the funnier moments, if only for how unapologetically inappropriate it is, but even then, the script by Brian Burns, Anders and John Morris, follows it up with a scene that looks and feels strained and tired. It’s the movie’s curse: for every good scene that raises a chuckle or even a belly laugh, there’s at least two more scenes that cancel it all out.

With Ferrell on auto pilot for most of the movie, and the basic scenario not requiring too much effort from anyone to sell it, the rest of the cast breeze through their scenes as if they were on a break from more serious acting chores. Reuniting with his co-star from The Other Guys (2010), Wahlberg coasts along as Dusty, while Cardellini has the less than enviable task of playing the inevitably underwritten lead female. Church is frankly annoying as Brad’s boss, and is stuck with some of the worst “inspirational stories” ever relayed on screen; and Buress wanders in and out of the movie in order that Brad can be accused of racism at odd moments (and yes it is as awkward as it sounds).

If there’s a purpose to Daddy’s Home, other than to propagate the idea that one man’s sexual potency can reverse the infertility of another man, then it quickly gets lost in the telling. This is a movie whose central idea would have been better suited to a half hour short, or perhaps an episode of Modern Family. Anders directs with all the flair of someone who prints the first take, and the movie is blandly shot and edited so as not to stand out from the blandness of the material. All in all, it’s another knock-off Will Ferrell movie, and with all the disappointment that that entails.

Rating: 5/10 – more of an effort all round would have made all the difference to Daddy’s Home, but sadly it didn’t happen, and large stretches of the movie go by without making any kind of impact whatsoever (though it might encourage a degree of apathy in the casual viewer); but when it does get it right, on approximately half a dozen occasions, then its very good indeed (surprisingly), and makes you wonder what could have been achieved if the cast and crew hadn’t settled for “just good enough”.