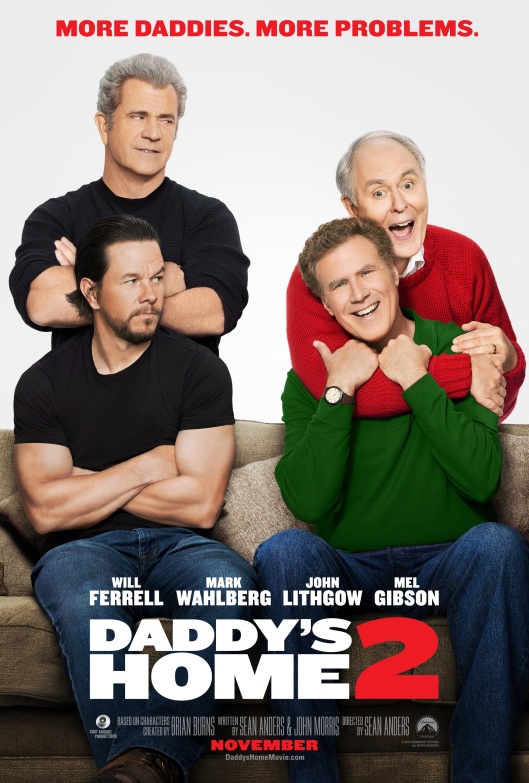 Is it only two years since we were “treated” to Daddy’s Home (2015), the lacklustre real dad versus step-dad movie that was banal and uninspired except on a handful of occasions (bet you can’t name any of them now, though)? Well, the sad answer is yes, it is, and if this entirely expected (but unnecessary) sequel achieves anything, then it’s being blander and less funny than its predecessor. It’s actually quite impressive: the lengths to which the makers of Daddy’s Home Two have gone to ensure this sequel is a snoozefest on an epic level. This is a movie that makes the original look and sound like a multi-award winning cult classic. It’s also one of the dreariest movies to come along in a very long while. If you manage to get through this from start to finish, give yourself a pat on the back and a gold star.

Deciding that making a sequel means bringing in bigger names to bolster the cast, this has somehow managed to attract the likes of Mel Gibson, John Lithgow, and most bizarrely of all, Chesley ‘Sully’ Sullenberger, the pilot responsible for the 2009 Miracle on the Hudson plane landing. There are always projects where you wonder if anyone read a finished script before shooting began, and what appears to be obvious here is that if they did they didn’t worry about the lack of laughs, the terrible dialogue, the predictable arc of the story, or the OTT feelgood ending that sees most of the main cast “singing” Do They Know It’s Christmas by Band Aid (why? Don’t ask). Comedy sequels usually aim higher, bigger, broader, or sometimes opt to be more extreme. However, this is a comedy sequel that eschews all that and goes all out to be the cinematic equivalent of beige; as a result, it’s unrelentingly tedious. The movie lasts for one hundred minutes but watching it feels like it takes twice as long. 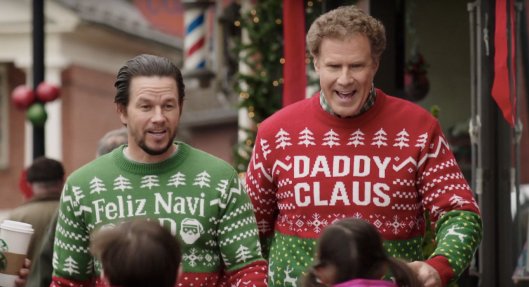 The main problem is that the script – by director Sean Anders and John Morris – doesn’t have a purpose other than to make the audience wait until Gibson’s horny old goat, Kurt, finally succumbs to the idea of peace and goodwill to all men and kisses his son, Dusty (Wahlberg), on the mouth (and yes, you are reading that right). Before then, the movie takes an age to undermine the friendship and mutual understanding that was established between Dusty and Brad (Ferrell) in the first movie, and only around the hour mark does it finally pit them against each other. Cue lots of moody looks between the two characters, and both of them engaging in the kind of low-key antagonism that is best expressed by Brad’s fake-pumping a snowball throw: there’s a minimum of intent and no follow through. Throughout, Dusty tells Brad that Kurt is looking to undermine their co-dad status, and while Kurt is certainly dismissive of their friendship – and questions their masculinity at every opportunity – again there’s more intent than action. This is a sequel that talks a lot about what’s going to happen, and what did happen, but has a hard time focusing on the present.

As a comedy, it relies on a series of pratfalls that happen to Don (Lithgow), Brad’s father, and Brad himself; a number of uninspired one-liners; the blossoming attraction of pre-teen Dylan (Vaccaro) for his pre-teen step-sister, Adrianna (Costine); and… that’s about it. There are an awful lot of scenes that occur purely in order to set up the next scene, and then that scene sets up the next scene, and so on, until finally a scene comes along that has a specific purpose. By then, however, any sense that the script knows what it’s doing, or that Anders has any intention of loading the movie with any appreciable energy, is long gone, and as the movie drags itself along like a sick animal looking for a place to curl up and die, any sympathy that arises is entirely for the viewer, and not for the cast and crew who took part in it. They should have known better. (And it all takes place at Xmas, for no better reason than to provide an excuse for Kurt and Don to be involved, as if family get-togethers don’t happen at any other time of year.) 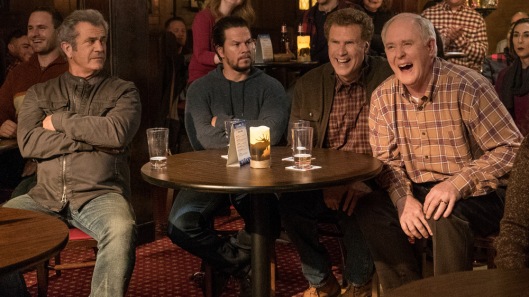 In the end, it’s a lazy movie with lazy performances and a hazy sense of its own quality. Ferrell has made too many similar “comedies” for anyone to be surprised at his involvement, while Wahlberg keeps everything on the same level throughout. Their performances are as perfunctory as possible, and they’re encouraged by Anders’ desultory approach to directing; going through the motions is all that’s required of them. Gibson is hamstrung by his character’s one-note attitude to parenting, while Lithgow’s dad-with-a-secret tries for pathos in one scene but is let down by the comic shifts that occur right alongside his tragic reveal. Cardellini and Ambrosio are the token women putting up with Brad and Dusty’s shenanigans, and with barely a word of protest (hey, whatever happened to strong female characters in comedies?), while the child actors are used for maximum cuteness, something that soon wears thin.

Forbearance is a wonderful thing, and so is patience, but if you absolutely have to see Daddy’s Home Two, then be prepared to wait around for long stretches for anything to have an impact, or provide a genuine laugh, or provide you with anything that will make the experience worthwhile. If this is the best that everyone can do, then it’s a further damning example of the parlous state of mainstream movie making in America today. With a budget of $69 million, it’s hard to work out where the money was spent, but easy enough to see why it was greenlit in the first place. That doesn’t excuse the poor quality of the script, though, or the lack of commitment from all concerned, all of which makes the movie not just a disappointment but a dire retread of themes and ideas that have been done to death already. You could argue that a movie like this one isn’t expected to be great, or a must-see, but with the talent involved it is reasonable to expect a greater effort made in making the movie as good as can be. That it doesn’t look like anyone could be bothered is both appalling and, worse, unsurprising.

Rating: 3/10 – sequels are an easy source of revenue (this has already made its money back and more), but they needn’t be an excuse for a shoddy finished product; Daddy’s Home Two is both of those things, and is also laboured, boring, unimaginative, and a slap in the face to viewers hoping to be entertained, something this movie gives up on with alacrity.