A Dog’s Purpose tells the five lives of one canine soul (related in voice over by Gad), who initially lives a very short life as a feral puppy called Toby before finding a “forever home” in his second incarnation as a Golden Retriever. It’s 1961, and Toby is rescued from a locked car by a young boy, Ethan (Gheisar), and his mother (Rylance). Toby is renamed Bailey (or to his ears, Bailey Bailey Bailey Bailey) and he becomes a part of the family. Ethan’s mother is very supportive, but his father (Kirby) can be aloof, and prone to mood swings. When a dinner party for his boss goes awry thanks to Bailey’s fun-seeking nature, seeds are sown in relation to Ethan’s father and the work he does, seeds that will have serious repercussions later on.

As a teenager, Ethan is on course to earn himself a football scholarship, and he has a bright, vivacious girlfriend, Hannah (Robertson). Bailey goes wherever Ethan goes, and life for Ethan is pretty good, but his father pushes his mother to the ground while he’s drunk and Ethan tells him to go for good. Following that incident, one of his “friends” puts a lit firecracker through their letterbox, and the house catches fire. Ethan and his mother only get out thanks to Bailey’s quick response, but in jumping to safety from an upstairs window, Ethan fractures his leg. His dream of playing professional football now in ruins, Ethan becomes embittered and ends his relationship with Hannah, and leaves for agricultural college.

Bailey lives out the rest of his life with Ethan’s mother and her parents, and eventually dies of old age. His next life sees him reincarnated into the body of a German Shepherd K-9 called Ellie. With her police partner, Carlos, Ellie chases criminals and helps Carlos overcome his feelings of loneliness follwing the break-up of his marriage. Ellie has all of Bailey’s memories (and attitude), and misses all the fun and games she had previously with Ethan. In his fourth life, Bailey is a Pembroke Welsh Corgi called Tino who is rescued from an animal shelter by shy college student Maya (Howell-Baptiste). Tino and Maya are together for a long time before his next life comes along. Now a Bernese Mountain Dog, and called Waffles, he’s abandoned by his owner’s abusive boyfriend but is found by someone whose smell he recognises, someone he hasn’t seen since his time with Ethan…

An unashamedly feelgood movie, A Dog’s Purpose has had a surprising amount of negative publicity forced upon it in the last few months, so much so that advance screenings (and its Los Angeles premiere) have been cancelled, supporters of the movie have done their best to distance themselves from it, and Hallström has received numerous hate messages. The reason? Back in January 2017, footage appeared that seemed to show a German Shepherd called Hercules being forcibly dropped into and dragged through rushing water, and with no regard for his safety or if he was distressed. But the footage had been edited to give a false impression of the dog’s “distress” and in February this was confirmed by the American Humane Association. 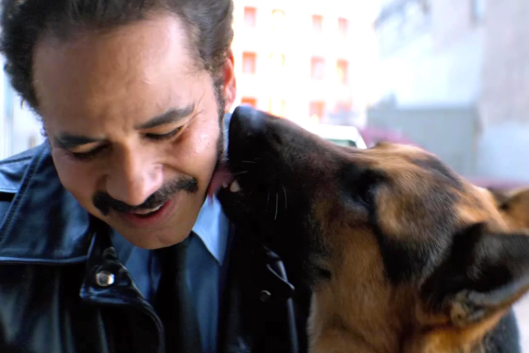 All of which was very dramatic – way more dramatic than anything that happens in A Dog’s Purpose, and despite the movie killing off its central character four times. Based on the novel of the same name by W. Bruce Cameron, the movie retains the novel’s portmanteau structure, and unsurprisingly, some of Bailey’s incarnations are more effective than others. His time with Ethan gets the most screen time, and their scenes together paint an affecting portrait of mutual respect and understanding. But though the emotional bond between Bailey and Ethan is established very early on, it’s the closer bond between Ethan and his father that matters more, and the inevitable disintegration of their relationship. While the movie puts warm and fuzzy in the foreground, it has the sense to keep dark and upsetting sequestered in the background, and waiting to come out when needed.

The same occurs when Bailey becomes Ellie. Ortiz’s melancholy police officer lacks the connection that Ethan had with Bailey, and though the mechanics of the overall storyline dictate that each incarnation has its fair share of problems, Ellie’s life is the toughest, and the complete opposite of Bailey’s. This is reflected in the manner in which Ellie becomes Tino, but even though it should be heartbreaking, the knowledge that “Bailey will return” negates any inherent drama. Thanks to Cameron’s spin on canine reincarnation, there’s no sense that there’s anything at stake here, and even though it’s fairly obvious where all these different lives are heading, there are few lessons learnt along the way, and Carlos’ and Maya’s stories end up feeling incidental to the main focus, which is when will Bailey and Ethan be reunited?

What helps and hinders the movie in equal measure is the voice over provided by Gad. As a way of (literally) getting inside Bailey’s head during each incarnation, it’s an idea that gives the movie the opportunity to see things from the dog’s point of view, and to do so in a way that avoids the usual kind of anthropomorphism so often seen in movies where animals feature as central characters. There’s no sappy, snappy banter a la Homeward Bound: The Incredible Journey (1993), just Gad relaying the joy of being a dog, and in such an infectious, humorous manner that you can believe that this is how all happy dogs think and behave. But there’s a serious side to it all as well, as Bailey takes time out every now and again to ponder on the bigger questions, such as why cats want to be dogs deep down and can’t admit it, why some owners don’t want to play Fetch, and more importantly, what is Bailey’s purpose in coming back so often.

While the answer may sound a little cheesy, and not quite as profound as Hallström and Cameron (plus his four co-screenwriters) would have liked, it does serve to give the movie more meaning than usual, and the material overall is in Hallström’s very safe hands. The director of My Life As a Dog (1985) and Hachi: A Dog’s Tale (2009) maintains his unique ability to craft emotionally resonant movies out of stories involving our canine friends, and though in many ways this is a movie that offers little in the way of anything new or original, it succeeds by telling Bailey’s story simply and directly. With a superb canine cast that easily puts its human counterparts in the shade, the movie also has a sentimental, decorative score from Rachel Portman, and vibrant, energetic cinematography from Terry Stacey that complements Bailey’s joie de vivre.

Rating: 7/10 – infectiously enjoyable, and a movie to warm the hearts of dog lovers everywhere, A Dog’s Purpose is at its best when showing the depth of the bond between a dog and its owner; less successful in terms of its structure, and perhaps showing one life too many, the movie also suffers from too many perfunctory performances (the script’s fault, not the cast’s), and a saccharine quality in places that’s completely unnecessary.