There’s a particular sub-genre of dramas where the protagonist travels to another country in order to get away from some trauma or terrible circumstance that has affected them badly, or which they were responsible for. Such is the case with writer/director Antonio Campos’ third feature, Simon Killer. Here the protagonist is recent college graduate Simon (Corbet), who has come to Paris following the break up of his relationship with a girl called Michelle. At least, that’s what he tells people, and especially Victoria (Diop), a prostitute he begins a relationship with, and Marianne (Rousseau), another young woman he begins seeing when things with Victoria begin to go wrong. He tells them that Michelle was seeing another man, and he has come to Paris to do “nothing at all” in the wake of their break up. But there’s more to the story than Simon is willing to let on, and as the movie progresses, just how much of his story is true becomes more and more relevant.

What also becomes more and more relevant is why Simon’s story might not be true. There’s no one to back it up, and no other evidence to support his claims. As he wanders through the city he meets Marianne and her friend, Sophie (Salet). His French is passable, but is enough to keep him in their company for most of the evening. The next day, Simon is cajoled into visiting a sex club, where he meets Victoria. There’s a connection between them, so much so that Victoria tells him they can meet up outside of the club (though he’ll still have to pay to have sex with her). Following an altercation where Simon is assaulted, he turns to Victoria for help. She takes him home, and in the days that follow, they begin a relationship. Simon, however, soon runs out of money. At first he “borrows” money from Victoria, and then he comes up with the idea to blackmail some of her clients at the club. 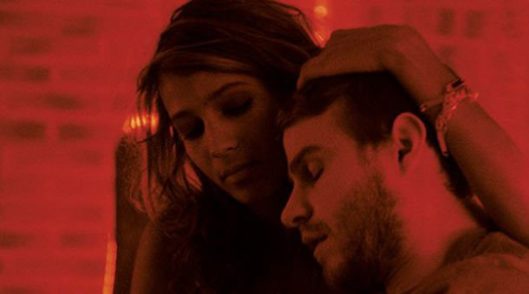 Their first attempt doesn’t go as planned, so they target another client, René (Solo). And then one day, Simon runs into Marianne and he asks for her number. The second blackmail attempt is more successful than the first, but their first intended victim (Abiteboul) finds out where Victoria lives and he beats her up. Simon tends to her at first but soon turns his attention to Marianne. They start seeing each other, but with no money, Simon decides to blackmail René again, but when he calls him, repeatedly, each time there’s no answer. It’s only when Simon receives a call from René’s wife who tells him that René has gone missing, that he goes back to Victoria. When he tells her they need to leave Paris immediately, Victoria’s reaction isn’t what he was expecting. Unable to get her to understand the seriousness of their situation, Simon reacts in a way that has unforeseen consequences.

Much of Simon Killer is kept hidden and obscured from the viewer by Campos’ artistic decision to be as elliptical and as cryptic as possible. If you’re a fan of movies made as a kind of intelligence test – can you work out what’s going on and why, and explain it in twenty-five words or less? – then this is the movie for you. And while there is definitely a place for these kinds of movies, when the movie itself can’t or won’t explain itself then the test is more about endurance than intelligence. What is clear is that Simon is damaged, and likely in a way that means he should avoid having close physical and emotional relationships (Patricia Highsmith’s Tom Ripley is an obvious progenitor). An arch manipulator – he uses being assaulted as a means of eliciting sympathy from both Victoria and Marianne – Simon is unconcerned with the feelings of others, and he’s always a little off when he talks about his own; he’s the poor, put-upon victim trying just to get by, and seemingly always at the mercy of others.

As the nominally sociopathic Simon, Corbet is in first-class form, his performance the glue that holds the movie together, and which stops it from becoming entirely forgettable. For make no mistake, Simon Killer is not a movie that satisfies or works, even within its own narrow framework. True, it is stylish and colourful to look at, thanks to the impressive work of DoP Joe Anderson, and it has a powerful soundtrack that balances techno rock with a discordant, unsettling score by Saunder Juriaans and Danny Bensi. But it’s also distant and vague in its mood, and bleak in its outlook, using the backdrop of La Pigalle to overstate the sleazy, absentee-morality of most of the characters, and the seedy milieu in which most of it takes place. It’s also a movie that reliably frustrates the viewer by sending its main character off into the streets of Paris with no fixed destination to aim for, and providing only the back of their head as a viewpoint (Campos also includes several shots that are presented at crotch level; whether this has any real meaning is debatable). Why indie moviemakers feel this is an acceptable way of padding out their movies remains a mystery that may never be solved.

Another mystery involves the nature of his Stateside relationship with Michelle, which is addressed around the halfway mark via an e-mail from said character, but in such a way that it opens up a whole other conundrum that isn’t addressed by Campos, and which only serves to throw confusion into the mix as to Simon’s behaviour and the motives for that behaviour. Sure, he’s a borderline narcissist and sociopath, but something must be driving him. Alas, Campos either knows but doesn’t want to tell us or give us any clues, or he doesn’t know and doesn’t think it’s important. Either way, we can only guess at the true nature of Simon’s mental and emotional malaise. But only if we want to, though, because again, it’s only Corbet’s terrific performance that keeps the viewer anywhere near interested. Campos may be interested in focusing on making the movie a chilly, atmospheric thriller with a decidedly villainous central character – an odious one, even – but it’s not enough to make the movie as compelling or as enthralling as he might believe.

Rating: 5/10 – technically ambitious yet emotionally sterile thanks to the approach to the material by its writer/director, Simon Killer is beset with issues relating to pacing, tone and clarity; a laudable effort then on some levels, but as a whole, this is a movie that frustrates more than it rewards, and which is undermined by a reluctance to let its audience fully engage with its central character (not that you’d necessarily want to). (12/31)