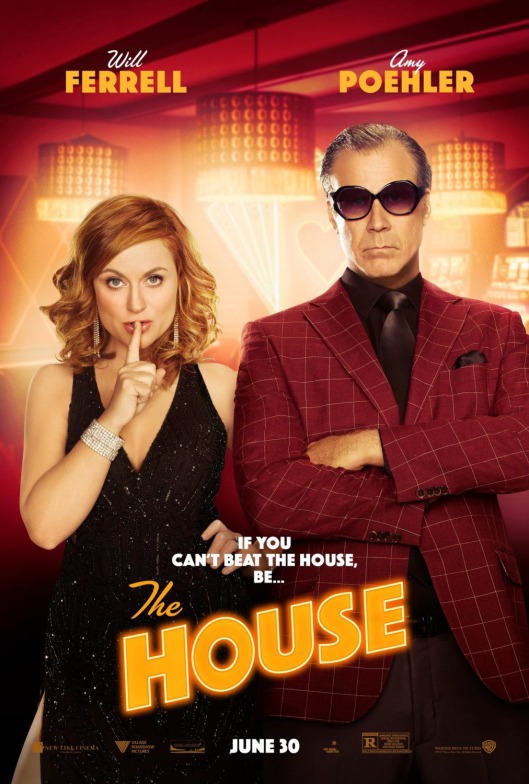 Okay, let’s get this out of the way at the start: The House is not a great movie, and this isn’t going to be a review that attempts to rehabilitate it in the eyes of audiences who have been less than won over by its occasional charms. This is also not a review that will attempt to fly in the face of critical opinion. To repeat, The House is not a great movie. But it is a movie that does what a lot of other modern comedies do, and that is that it operates in a kind of alternative reality where the accepted rules are cast aside, and things happen randomly without any pause for credibility or even clarity. It’s an alternative reality that allows movie makers to ignore certain precepts and create scenarios that would have no credence in the real world, but which are ideal for the manufactured world they’re creating. In short, it’s an alternative reality that creates its own rules (and sometimes, as it goes along).

The clues are there right from the start. This is a movie about a married couple, Scott and Kate Johansen (Ferrell, Poehler), who have somehow managed to produce a child, Alex (Simpkins), who is brighter, smarter, and more aware of the world than they will ever be. Scott is another patented Ferrell man-child, someone who manages to hold down a company job while also being a complete idiot. Poehler is the eternally confused wife for whom everything is too complex, and who struggles to keep track of everything going on in her life. (How they ever managed to conceive a child, let alone raise her to be so independent and intelligent is a question the movie never asks, but it’s in keeping with the nature of the world they inhabit.) They live in the kind of nice, well appointed house that all middle-class American citizens inhabit (in the movies at least), and have a fairly good standing in their local neighbourhood. They’re nice, averagely average, and without a speck of original thinking between them.

When Alex’s college place is threatened by the loss of an expected scholarship, her parents descend immediately into meltdown territory. They can’t afford to pay for it themselves, so they do what every sensible, right-thinking couple would do: on the advice of their gambling addict friend, Frank (Mantzoukas), they open an underground casino in Frank’s house. It’s all entirely illegal, they have no clue what they’re doing, but the money comes rolling in from friends and neighbours who all seem completely okay with gambling and losing their hard-earned money in such a cavalier manner (there’s obviously a lot of money in suburbia – who knew? – as the same people turn up every night). As always happens in these kinds of scenarios, the casino is a huge success, and soon Frank has expanded the operation to include a pool, a massage room, and a strip club (hey, it’s a big house).

All this activity starts to attract the attention of dastardly councilman, Bob Schaeffer (Kroll), who recruits the only policeman in town, Officer Chandler (Huebel), to find out where everyone is going at night when they should be at town council meetings. Meanwhile, Scott and Kate have taken to acting cool and looking ridiculous as they confuse looking like casino owners with looking like pimps from the Eighties. And when Frank catches someone cheating at one of the tables, it leads to Scott chopping off one of the guy’s fingers, which allows the movie to invalidate the laws of blood loss by having Scott covered in enough plasma for two people while the unlucky gambler remains as rosy-cheeked as before. Cue the police? Cue Ferrell in orange prison attire? No, wait, he’s done that before, in Get Hard (2015). No, this being an alternative reality, the unlucky gambler is allowed to leave but not before promising reprisals from his criminal boss.

At this point, the movie is primed to put Scott and Kate through the wringer, and sure enough, Schaeffer confiscates the money they’ve made so far (none of which has gone to pay for Alex’s scholarship), and the unlucky gambler’s boss (Renner) turns up to kidnap Alex for ransom. There’s more, and it’s just as absurd and ridiculous as Scott being known as the Butcher for chopping a guy’s finger off (hey, there’s no such thing as bad publicity). But by now it’s all completely and utterly irrelevant. The script is prepared to lurch in any direction it sees fit in its efforts to wring laughs out of its low-concept premise, and just when you think the world all this takes place in can’t possibly take one more hit of absurdity without collapsing in on itself, it rallies round and adds yet more nonsensical moments to the mix. If you take a step back and look at it all objectively, you can’t help but admire the effort that’s been put into making a movie that has such an obvious disregard for plausibility, and which is saying, loudly, this is what it is, so either deal with it or go home.

With all that in mind, a movie can be as crazy and subversive and wacky and as deliberately dumb-ass as it wants to be, but if it’s a comedy then it has to be funny. No amount of alternative reality building can compensate for a comedy that doesn’t raise the requisite number of laughs, and though it has its moments, The House is just not that funny. Partly because Ferrell and Poehler are rehashing the same schtick we’ve seen them do too many times elsewhere, and partly because Cohen (making his debut as a director), doesn’t have the skill to make the most of those scenes where laughter should be automatic and not haplessly manufactured. The fantasy world that Cohen and co-writer Brendan O’Brien have created should have given them enough ideas to pepper the script with enough one-liners, comical confrontations and physical gags to make this a laugh riot. Alas, there are too many dead spots, the performances are middling to bland (except for Mantzoukas and Huebel, who rescue the scenes they’re in by sheer dint of effort), and any attempts at consistent characterisation are, predictably, undermined by the demands of the script (which change every few scenes).

Rating: 4/10 – for viewers prepared to go along with its absurdist reality, The House is still a doubtful prospect in terms of getting a good return on your investment; brash and loud and with a clumsy approach to its basic premise, it’s a movie that squanders a lot of opportunities to be better than it is, and which shows that even in an alternative reality, it’s structure that’s really the key ingredient.