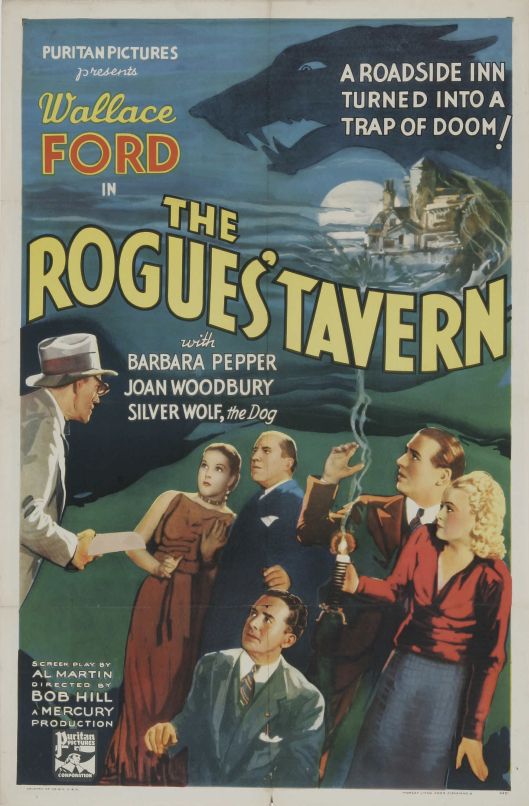 Wise-cracking detective Jimmy Kelly (Ford) is in a hurry to marry ex-store detective Marjorie Burns (Pepper), but has to cross the state line in order to do so. The pair end up at the Red Rock Tavern late one night waiting for a justice of the peace to turn up. Soon, one of the other guests, a man named Harrison (Henderson) has been killed, his throat ostensibly ripped out by a dog (Silver Wolf) that roams around the outside of the inn. When a second murder occurs, Kelly takes charge of the situation, but finds few clues to help him. A third murder, plus the arrival of another guest named Wentworth (Loft), makes things even more confusing, but it’s not long before the inn’s owner, wheelchair bound Mr Jamison (Elliott), points Jimmy in the right direction, and it becomes clear that a conspiracy is in progress and that the guests are all potential murder victims of an unknown assailant. But is that assailant someone who is already there at the inn?

There were literally hundreds (if not thousands) of murder mysteries set in old dark houses during the Thirties and Forties, and they all followed a very predictable formula: a group of people are brought together (some might know each other, most will be strangers to each other) at a remote location, soon their numbers will begin to dwindle as one by one they’re killed off, and one of the assembled guests will prove to be a detective (or amateur sleuth) who will solve the mystery in the last reel (and may even get to sock the villain on the jaw in the process). Along the way there will be the usual amount of red herrings, obvious characters who must be the villain but who will turn out to be innocent, and a leading lady acting as the hero’s annoying, always-getting-into-trouble girlfriend (or if he’s a newspaperman, then she’ll be a rival journalist trying to figure out who the murderer is before he does). 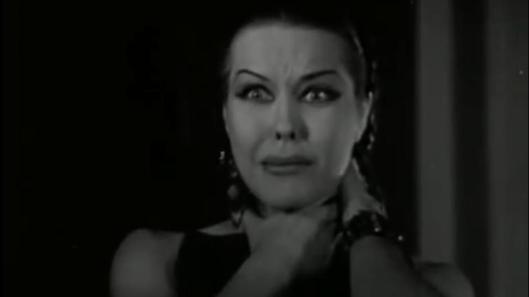 The Rogues Tavern follows that formula very carefully, with its stranded characters arguing amongst each other as the wily murderer picks them off one by one, and the screenplay – an original by Al Martin – seeks to keep the viewer guessing at every turn, and doing a pretty good job of it. The first two murders are blamed on the dog (who looks about as frightening as Lassie), but when it’s in the same room as (nearly) all the others and a third murder is committed, then it’s clear that the movie has something else up its sleeve. This is eventually revealed in the final reel, where the murderer’s identity is uncovered, they laugh maniacally while explaining their dastardly plan for everyone, and are overpowered by Kelly appearing at the last second to save the day. Before then secrets are exposed, Marjorie does her own sleuthing (which pays off), Kelly gets socked on the jaw more than once (and not by the villain), and the inn is revealed to be one big death trap.

Despite its unprepossessing scenario and overly familiar set up, the movie is a sprightly example of what could be achieved on a meagre budget. Hill – who would go on to direct Flash Gordon’s Trip to Mars (1938) – refrains from using too many wide shots and keeps things tight, giving the movie an occasionally claustrophobic feel, an effect that’s helped by the camera staying close to the characters and capturing as many close ups as it can. The cast, many of whom are veterans of this type of movie, play their parts with agreeable gusto, while Ford makes for an enjoyable leading man, his easy-going demeanour and vaudeville background ensuring Kelly isn’t the genre’s usual earnest young hero. Pepper is stranded in blonde-bimboland but acquits herself well, and there’s an opportunity to see silent era star Kimball Young in a small but pivotal role that shows off the skills that, by that stage in her career, were criminally under-used.

Rating: 6/10 – despite its familiar setting and occasionally dodgy line readings, The Rogues Tavern is an entertaining old dark house mystery thriller that offers a handful of surprises to sweeten the experience; there’s comedy too amongst the thrills, and the whole thing is a delightful reminder that not every low budget, minor league thriller from the Thirties was a poor excuse for entertainment.

The tag line for Lady in the Death House says it all really: “Condemned to die…by the hand of the man I love!”, and only in a murder mystery from the Forties (oh, okay, and maybe the Fifties as well) would a scenario such as that one even exist. The movie begins with Mary Kirk Logan (Parker) on her way to the electric chair for the murder of a blackmailer. She’s just written a letter to a friend, criminal psychologist Dr Charles Finch (Atwill), who recounts both the details of the letter, and the case, to a group of journalists. We see Finch first meet struggling scientist Dwight Bradford (Fowley), and then they in turn meet Mary. Bradford and Mary soon fall in love but there’s a sticking point to their relationship: in order to make ends meet and further his research into reviving dead tissue, he has a second job as the state executioner (you can see where this is going, can’t you?). Mary won’t marry him while he’s a sanctioned killer, but before they get a chance to patch things up, Mary is sent to prison, and it’s down to Finch and Bradford, aided by Mary’s younger sister, Suzy (Jones), to prove her innocence before she’s executed.

Despite the absurdity of its romantic conundrum, Lady in the Death House is a neat, compelling little murder mystery that packs a lot into its short running time, and is far more rewarding than it has any right to be. A lot of its appeal has to do with the presence of Parker and Atwill, two actors who rarely gave disappointing performances and who should have had much bigger careers than was actually the case. Parker was a very talented actress, and it shows here as she resists the urge to make Mary’s situation one that many other actresses would have decided was ripe for unrestrained melodrama. It’s this very restraint that makes her role all the more sympathetic and credible. Atwill is at his most charming and relaxed, carrying the weight of so much exposition with an ease that most other actors would have wilted under. Like Parker, he divests his character of any melodramatic tendencies, something that for the time wasn’t the norm. When they share a scene together, it’s like a mini acting masterclass, and their performances stand out from those around them. 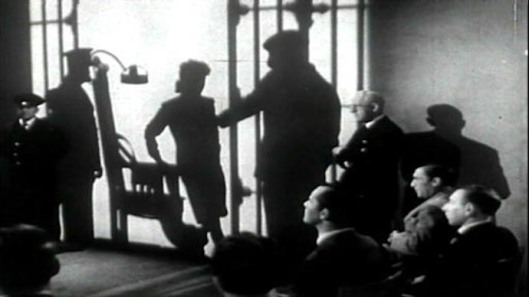 They’re helped immensely by Harry O. Hoyt’s focused screenplay – from a story by Frederick C. Davis – which culminates in a race against time to keep Mary alive. Bradford has a crisis of conscience along the way, but by then it’s too late for the character, who proves to be the movie’s one weak link. Fowley was a capable actor for the most part, but here he’s cruelly exposed by the constraints of a character who can’t or won’t give up his job as state executioner for the woman he loves (because the script says he can’t or won’t). Whenever it’s brought up, Fowley adopts the look of a man suffering from extreme emotional torment and remains quiet, frowning in apparent pain and wishing he was elsewhere. It’s not Fowley’s fault, but Bradford’s avoidance of the subject makes the character appear wilfully stupid.

That one issue aside though, the movie has a consistent, well developed pace that Hungarian-born director Sekely maintains through using effective cutting to provide a sense of urgency. His use of light and shadow is also much more effective than is usual for this kind of movie (see above image), and though this is a Producers Releasing Corporation production – a company more usually associated with so-called Poverty Row releases – it doesn’t look as washed out or as bland as many other movies made on such a small budget. The mystery elements are cleverly and plausibly established (even if there’s a clear miscarriage of justice at the heart of Mary’s trial that’s likely to have modern day audiences yelling at the screen), and the identity of the murderer, and their motive, is revealed in an equally acceptable and plausible way. On the whole, this is a low budget thriller that’s had a lot more attention paid to it than you’d usually expect.

Rating: 6/10 – good performances from Parker and Atwill, and confident direction from Sekely, help tremendously in keeping Lady in the Death House from becoming a pedestrian retread of every other innocent-facing-certain-death mystery movie; a largely polished exercise in small-scale thrills, it may not strike a chord with everyone, but for those who enjoy this sort of thing, there’s plenty to keep them happy.