The Circle is a high-tech company that’s looking to integrate every possible form of social interaction, be it personal, professional, legal, financial, medical, morally proscribed or otherwise, into a catch-all application that’s designed to promote and provide transparency in all aspects of daily life. In essence, The Circle is attempting to create a world where there are no secrets or lies, and all to make everyone’s lives easier and better and more fruitful. What could possibly be wrong with that? (Actually, quite a bit, but for the movie itself, that’s another issue.) It’s left to newbie Mae Holland (Watson) to discover the truth behind The Circle’s motives, but not before she becomes the face of The Circle, and accrues the kind of worldwide popularity afforded to rock stars, footballers and self-promoting celebrity wannabes… and all because of a midnight kayak trip that goes wrong.

It’s at this point in The Circle that director James Ponsoldt, along with co-writer and creator of the original novel, Dave Eggers, throw in the towel and quietly resign the audience to a series of even more ineffectual scenes than have gone before. Mae gets her job at The Circle with the usual ease of someone in the movies who can field a barrage of probing questions by umming and ahhing and giving uninspired answers. Once ensconced in Customer Experience she quickly blends in with all the other vanilla members of staff, and makes no impact whatsoever. She meets but doesn’t recognise disillusioned programmer Ty Lafitte (Boyega), whose True You application is now being misused by the company, and believes everything that co-founder Eamon Bailey (Hanks) says at his regular company-wide meetings (which are no more than mini-Expo’s for the company’s latest innovations). All around her, the clues are there as to The Circle’s true motives, and though she’s not exactly drinking the company Kool-Aid, she is allowing herself to be drawn further and further into its “evil machinations”.

But then comes that fateful midnight kayak trip and everything changes. Mae, who is to civil disobedience what Stephen Hawking is to breakdancing, steals a kayak, ventures out into a shipping lane surrounded by fog, and ends up being rescued by the Coast Guard. Without this out of character moment (which is never satisfactorily explained), the movie would have stalled altogether and even more viewers would have lapsed into comas. Mae thinks the publicity – the whole thing was captured on dozens of the company’s SeeChange cameras – will mean the end of her career. But Bailey has other ideas and enlists Mae to promote the company’s latest idea, that of a life led through total transparency. Mae wears a tiny video camera, allows the feed to be shared online, and only gradually begins to understand that The Circle is as dastardly in its aims as everyone else has guessed from the beginning. It’s not until the use of a new app leads to a tragedy that affects Mae directly that she decides to turn the tables on Bailey and… well… let’s just say it’s meant to be ironic and a case of just desserts being served, but it’s so underwhelming you might not believe she’s actually done it. 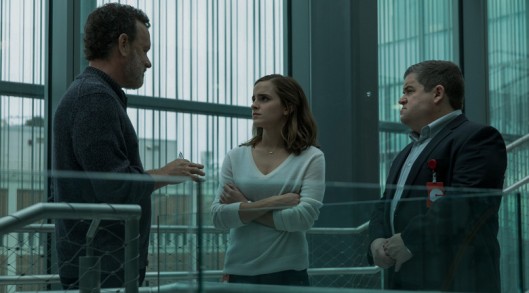 As dystopian thrillers go, The Circle operates on a level that, much like the Circlers who work for the company, requires the viewer to go along with whatever the movie comes up with, and not to raise any objections. However, Ponsoldt and Eggers have crafted a script that defies the viewer to make any connection with Mae, or Bailey, or her parents (an underused Headly and Paxton), or anyone else for that matter, and which is dramatically inert for much of its running time. It’s a movie in which very little happens, and when it does, it doesn’t have the impact required to lift the movie out of its self-imposed doldrums. It’s a thriller where the director appears to have forgotten to include any thrills, and a message movie where the message is spelt out in big bold letters for anyone watching who might be hard of understanding. It’s a spectacularly misjudged movie, baffling in its intentions, and uncomfortably, unalterably dull.

As well as being unable to elevate the material above the merely mundane, Ponsoldt is also unable to draw out even the hint of a good performance from anyone. Watson gives yet another performance that makes it seem as if she’s still astonished at how she’s been able to sustain a career beyond Harry Potter, while Hanks adopts a friendly uncle persona that is the whole of his portrayal (after this and A Hologram for the King (2016), perhaps he should stay away from any more adaptations of Eggers’ work). Boyega is wasted as the “mysterious” Lafitte (Bailey doesn’t know where he is, even with all his SeeChange cameras; which is a shame as he can be spotted at The Circle’s HQ wandering around quite openly), and several subplots waste the involvement of the likes of Oswalt, Gillan and Coltrane. While the movie clunks along in neutral, with occasional detours into first gear, it also manages to undermine the not inconsiderable talents of its composer, Danny Elfman, its DoP, Matthew Libatique, and its production designer, Gerald Sullivan. And when that’s the best achievement that a movie can make, then it’s definitely time to move on and watch something else.

Rating: 4/10 – boring, dull, uninspired, leaden, bland – take your pick as all of those could (and do) apply to The Circle, the latest in a long line of thrillers that have chosen high tech businesses as their preferred boogeyman; just when you think it’s going to get interesting, it doesn’t, and just when you think Mae will wake up and smell the bullshit, she doesn’t, leaving the movie to promise much, but deliver very, very little in the way of viewing satisfaction.