Based on a true story. Possibly one of the worst phrases you can see appear on screen at the beginning of a movie. Based on a true story. Which means… what exactly? That the makers of the movie have taken a true story and made their own version? Well, if that’s the best definition, then the makers of Churchill have done precisely that: they’ve taken a true story, the lead-up to the Normandy landings on June 6, 1944, and woven a tale that paints Winston Churchill (Cox) as a self-aggrandising blowhard, his wife Clementine (Richardson), as a dutiful yet exasperated woman who nearly comes to leave him, and puts both of them at the centre of a turgid retelling of an event that determined the course of human history.

Winston Churchill has been portrayed on screen many, many times in the past, but always as the fearless leader who guided Great Britain through World War II, and who helped bring about the demise of Hitler and the Nazis. For the British, he was a hero, a public figure they trusted and the only man who could lead the country during those terrible times. But this version of Churchill is the tortured, reluctant hero so consumed by guilt and self-doubt that he thinks it’s a great idea for both he and King George VI (Purefoy) to sail at the forefront of the Normandy landings as a sign of commitment to their troops. This is the version of Churchill who behaves like a spoilt child who can’t get his own way, who puts his own needs ahead of the needs of his country, and who isn’t above throwing a childish tantrum when his needs aren’t met. This is Churchill deconstructed and reassembled as a potential liability. Look, the movie is saying, look how close Churchill came to ruining Great Britain’s war effort. 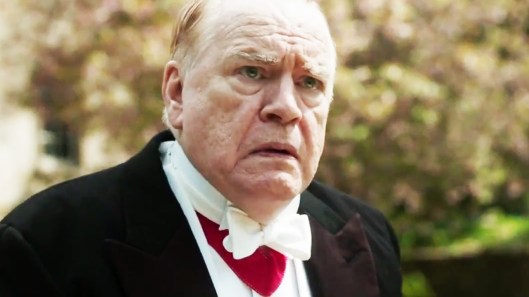 Except, inevitably (there’s that word again, regular readers), very, very little of it is actually true. In fact, so much of Churchill is inarguably wrong that it’s hard to work out why the movie was made, and why everyone involved thought the approach taken by screenwriter Alex von Tunzelmann was a good idea. The movie is a deliberate attempt to create a fictional drama out of a situation that doesn’t need to be rewritten at all; if the lead up to D-Day isn’t dramatic enough without all these fabrications, then someone is really missing the point. For UK audiences it should be even more galling. Not content with casting aspersions about Churchill’s character at a time when he was fully supportive of the aims and objectives of Operation Overlord, the production seeks to promote the idea that Winston and Clementine had an unhappy marriage, and that some kind of coup has taken place in the run up to D-Day, with General Eisenhower firmly in charge of the whole plan, and Churchill reduced to sitting belligerently on the sidelines voicing concerns he didn’t have.

In order to provide some kind of psychological grounding for Churchill’s misgivings, the script refers repeatedly to the 1915 Gallipoli campaign, which in this version he tried hard to stop (when in fact, he was very much in favour of it, and even recommended sending obsolete warships against the superior German fleet). Cue blood-tinged tides and Churchill looking sad. But it never rings true as a reason for Churchill’s behaviour within the movie itself, and despite a tremendous amount of effort by the script to convince us otherwise, it’s an argument that falls flat every time it’s mentioned. It’s as if everyone around him – including the viewer – can see the necessity of the Normandy landings, but somehow, this astute, politically and militarily aware man doesn’t get it at all. Can we really expect this to be the case, and does it make sense even within the parameters of von Tunzelmann’s alternate wartime reality?

Sadly, the answer is no, and what’s even sadder is that the movie limps along from one scene where Churchill abuses the people around him to another, and with all the dramatic flair of an episode of a reality TV show. Teplitzky offers several moments where melodrama creeps in uninvited, and others where the unlikelihood of what transpires is shocking, such as Field Marshal Montgomery (Wadham) calling Churchill a “bastard” to his face, or typist Helen Garrett (Purnell) putting a halt to Churchill’s doom and gloom predictions of untold slaughter on the Normandy beaches by mentioning her fiancé is on one of the ships taking part (this has a further, and even more unlikely payoff later when Churchill lets Helen know her fiancé is okay and that he “sends her his love” – all during the midst of the first wave of landings). All this makes Churchill an uneasy and unconvincing mix of psychological drama and wartime soap opera.

But if the level of fabrication is weirdly impressive, what is truly impressive is Cox’s portrayal of the man himself, which despite the implausibilities and repetitious nature of von Tunzelmann’s script, is an acting tour-de-force, one that magnifies the (perceived) insecurities and guilt-ridden anguish that propel Churchill on, and which saves the movie from being completely and irrevocably execrable. Cox has long wanted to play Churchill, and the wait has been worth it, even if the material itself isn’t worthy of, or a match for, his performance. He’s ably and effectively supported by Richardson who also transcends the material with her performance as the (perceived) long-suffering Clementine Churchill, the character’s exasperation at her husband’s antics something that the viewer can appreciate entirely. But two performances, even ones as good as these, can’t stop Churchill from being a facetious way to treat a story that could have been told as it happened, and far more credibly.

Rating: 3/10 – based on a true story which here means let’s make a movie that distorts the truth (which is ironic coming from the author of Reel History: The World According to the Movies), Churchill is factually inaccurate, often insipid, slackly directed, and lacks any appreciable depth for viewers to latch onto; Cox and Richardson save the movie from being a complete disaster, and there’s reason to congratulate David Higgs for his sterling cinematography, but otherwise this is one for history buffs to avoid, and for non-history buffs to take with a huge pinch of salt.