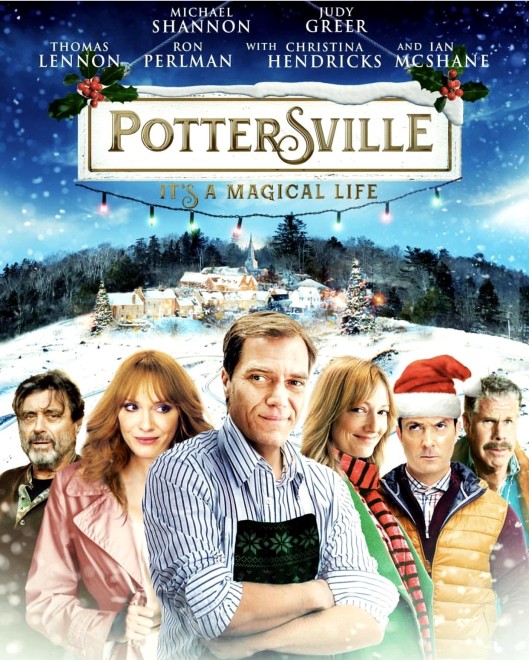 In the same way that most music artists are seemingly contractually bound to release a Xmas album (or at the least, a single), the same appears to apply to actors as well. This is the only way to explain the existence of Pottersville, a movie that features a well-known and very capable cast literally going through the motions right before our eyes. It’s a movie that will encourage viewers to have one too many glasses of Xmas punch, or perhaps wish they could choke on a mince pie while they’re watching it. It’s not even so bad it’s good; in fact, it’s just plain awful. So what on earth could have attracted said cast to the project in the first place? And why did two of them jump on board as producers? (Perlman is a co-producer, while Shannon is one of several executive producers – along with Patricia Hearst, which is still a weird notion even after all this time.) Surely they had some degree of confidence in the script, some idea that this could be a traditional heart-warming tale for children and adults alike? Didn’t they?

Well, if they didn’t, then the final product – directed by relative newbie Henrikson from a script by feature debut screenwriter, Daniel Meyer – must have come as quite a surprise. For while this looks very much like a Xmas movie at first glance, and while there’s plenty of snow around, and the wintry feel lends itself to being a Xmas movie, Pottersville isn’t set at Xmas, there aren’t any Xmas trees or decorations in sight, no one dresses up as Santa, and nobody has a tragic Xmas tale to tell a la Gremlins (1984). It’s all so misleading, especially when the poster supports the idea that this is a Xmas movie, and features various Xmas trees and twinkly lights (and as for Lennon sporting Santa’s headgear, let’s not even go there). But while this isn’t a Xmas movie per se, it’s certainly feeding off the hope that viewers will begin watching it as such and wll be sucked in by the movie’s snowy mise en scene, but by the time they work out that they’ve been duped, the audience will have been exposed for too long to the movie’s daft sensibilities and ham-fisted attempts at providing the kind of generous helpings of down-home folksy wisdom that would make a reindeer choke and Santa blush with embarrassment. 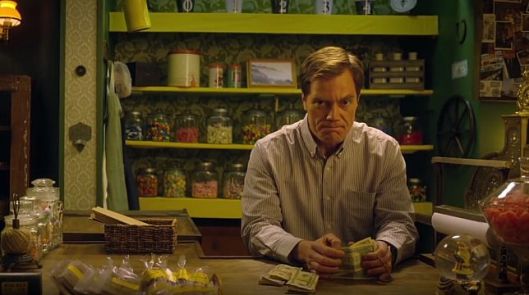 When it’s not being a Xmas movie – which is still all the way through – Pottersville is content to disturb the spirit of Xmas Past and rehash key elements from a proper Xmas movie: It’s a Wonderful Life (1946). Alas, it’s a telling distinction, as Shannon’s main character, general store owner Maynard Greiger, is no George Bailey, and despite Shannon’s obvious skill as an actor, here he’s no James Stewart either. Financial matters, though, are to the fore as the struggling town of Pottersville faces an uncertain future thanks to an economic downturn. There are more stores that are closed than open, and Maynard is the kind of philanthropic individual who’ll happily let someone off their bill if they’re having difficulty finding the money. With only one employee, Parker (Greer), it’s hard to work out how he’s managed to stay open, but he seems happy enough (if a little resigned to following in the foreclosed footsteps of his main street neighbours). A chance discovery that his wife is a Furry, and that his long-time friend and town sheriff, Jack (Perlman) is too, leads Maynard to get drunk and put on a Sasquatch outfit in a moment of alcoholic “insight”. He roams the town at night, is seen by too many short-sighted townsfolk, and soon discovers that his drunken behaviour has led to everyone believing that Bigfoot is alive and well and living in the woods outside of town.

With “Bigfoot” attracting media attention, Pottersville is soon inundated with people hoping to catch sight of the hairy fella, and the residents are only too happy to help relieve said people of their money, offering Bigfoot related merchandise and the like. Maynard sees the turnaround in the town’s fortunes and decides to keep quiet about what he did, and even provide the odd extra sighting from time to time. But there’s a fly in the ointment, in the shape of reality TV presenter, Brock Masterson (Lennon). Masterson arrives in town with his Australian accent and bored entourage, and promises to catch Bigfoot live on his show, Monster Finder. His initial attempts though, are unsuccessful – surprise, surprise – but when he accepts the help of local tracker and hunter, Bart (McShane), Maynard’s secret is placed in jeopardy, and so is the town’s renaissance. 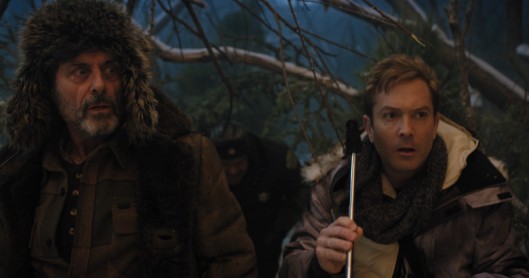 From the obvious references to It’s a Wonderful Life, to a scene that rips off Quint’s “you know me” speech in Jaws (1975), Pottersville lurches from one lapse in artistic judgment to another, and leaves its cast reeling in its wake. Rarely have so many talented actors looked so bemused or bewildered by what they’re being asked to do, and Meyer’s script proves of no assistance to them whatsoever. Probably best described as a broad comedy, this is cringeworthy stuff that many of the cast may well leave off their resumés in the future. Most of the movie’s “humour” is meant to come from the vain, cowardly antics of Lennon’s TV host, but he’s just tiresome from very early on, and irritating in a way that makes you want to reach through the screen and slap him. That he’s allowed so much screen time is one of the worst decisions the movie makes, and it’s right up there with its crude use of Furries – people who like to dress up in furry, anthropomorphic animal costumes – who at one point conveniently meet up in the woods for no apparent reason that anyone can think of. (If anyone in the Furry community is reading this, please be quick and get a documentary made about yourselves; don’t let this be the main representation of your lifestyle on screen.)

While there are some occasional moments when it seems as if the movie is going to break free of the heavy chains created out of Meyer’s poorly constructed (and hopelessly contrived) script, and Henrikson’s laboured direction, the movie shuts those moments down with a crash and its business as usual. There is a kind of perverse enjoyment to be had from watching such a bad movie, but the feeling rarely lasts for more than a minute, and the cast don’t seem able (or willing) to fight their way out from under. Shannon is under-used and left to look thoughtful for much of the movie, while Lennon portrays Masterson like a twelve-year-old going through atomoxetine withdrawal. Perlman and Greer fulfill their contractual obligations, Hendricks gets to spend a fair bit of time in a bunny costume, and McShane is perhaps the most “game” of all, but even he’s struggling, and when someone with McShane’s talent can be seen to be struggling, then it’s all you need to know.

Rating: 3/10 – like an evil Xmas present left out for the one kid on Santa’s Naughty List, Pottersville is appalling yet brief, far-fetched to the point of infinity, and not really worth anyone’s time – even fans of the cast; such a conspicuous waste of time and effort isn’t seen very often, and this is one of those occasions when it seems only WTF? will do as a response, but beware: you’ll be saying WTF? so many times it’ll be exhausting.