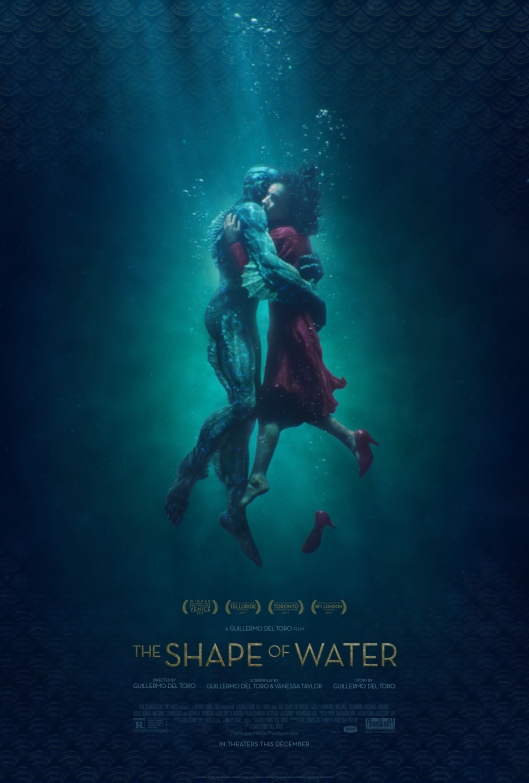 A romantic fairy tale set during the Cold War era of the Sixties, Guillermo del Toro’s latest feature is set in a secret government laboratory in Baltimore. Elisa Esposito (Hawkins) is a cleaner who works the night shift. She’s also mute from birth. One night the laboratory receives a new “asset”, an amphibious creature (Jones) captured in the Amazon river by military man Richard Strickland (Shannon). The creature proves to be humanoid, and though it’s ostensibly dangerous, Elisa develops a bond with it, and even uses sign language to communicate with it on a basic level. With the creature able to breathe in and out of water, the intricacies of its anatomy lead to the decision to have it vivisected. Elisa is horrified by this, and with the aid of her fellow cleaner, Zelda (Spencer), and her neighbour, elderly artist Giles (Jenkins), she determines to free the creature and return it to the sea. As she puts her plan into action, she finds unexpected assistance from one of the scientists at the laboratory, Dr Hoffstetler (Stuhlbarg), and unwanted attention from Strickland.

Fully and firmly back on track after the disappointment that was Crimson Peak (2015), Guillermo del Toro has made perhaps his best movie yet. The Shape of Water is a veritable treasure trove of delights. By turns funny, dramatic, sad, tender, exciting, joyous, imaginative, bold, romantic, uplifting, and poignant, it’s a movie that crams so much into its two hour running time that it should feel heavy-handed. Instead it feels like the lightest of confections, even with the overtly darker undertones that are threaded throughout the narrative and which help the movie add a credible and palpable sense of menace to the overall tone. del Toro has long wanted to make a movie inspired by Creature from the Black Lagoon (1954), but it’s unlikely even he could have predicted just how good the end result would be. From Paul D. Austerberry’s masterful period production design, to the efforts of the set dressers (so much detail), this is a movie that is constantly inviting the viewer to come nearer and peer closely at all the objects that fill each frame. And then there are the small yet seemingly effortless moments that pepper the movie, moments such as Elisa and Giles’ seated dance routine, or the man at the bus stop with the partially eaten cake. It all adds up to a richness of texture that is nigh-on faultless.

But the movie isn’t just beautiful to look at, it’s also an old-fashioned love story (an inter-species love story, to be fair, but hey, so what? As Joe E. Brown says at the end of Some Like It Hot (1959), “Nobody’s perfect”). It would have been so easy to misjudge the tone and the mood in presenting this romance, but del Toro and co-screenwriter Vanessa Taylor handle it perfectly, combining elements of magical realism and the aforementioned fairy tale aspect to wonderful effect. Hawkins – for whom the role of Elisa was written – gives a mesmerising performance, passionate and vulnerable, determined and caring, and capable of expressing any of Elisa’s emotions through the delicate shading of her features. As the principal villain, Shannon gets to add unexpected psychological layers to the role of Strickland, something that keeps the part from being that of a stereotypical bad guy, while Jenkins provides the majority of the laughs (and a great deal of pathos) as Giles, an elderly gay man still hoping to find love himself. Everything is rounded off by the music, as del Toro harks back to the golden era of Hollywood musicals. And just when you think he can’t squeeze in anything else, he gives us a black and white dance number featuring Elisa and the creature which is a tribute to Follow the Fleet (1936). This all leaves just one option: this much confidence must be applauded.

Rating: 9/10 – made with an intense amount of love and affection for its central characters, and with an elegance that shines throughout, The Shape of Water is a triumph of both style and substance; look closely, though, and you’ll find del Toro being quietly and unobtrusively subversive: ask yourself – which other movie are you likely to see where the heroes are in turn disabled, gay, black, and a Communist?