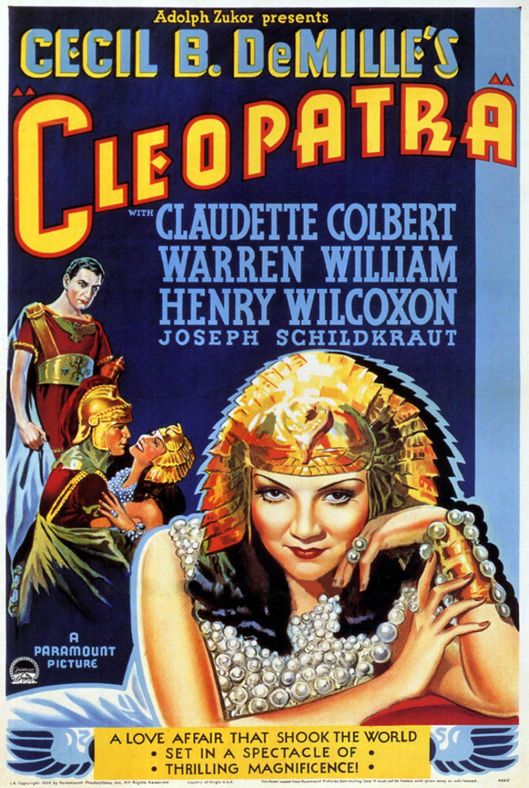 After his previous movie, Four Frightened People (1934), died at the box office, legendary director Cecil B. DeMille was charged with making an historical epic with “lots of sex in it”. DeMille, who knew exactly how to infuse his movies with sin when required, decided on a remake of the original 1917 version starring Clara Bow (that version is now lost, sadly). And with the Hays Code only just coming into force, DeMille had to move quickly. His intentions are clear from the start: the movie opens with a shot of a strategically lit woman who looks naked. And he doesn’t stop there. Star Claudette Colbert (not necessarily the first choice for a role bordering on that of a femme fatale) wears a succession of skimpy, revealing outfits, and DeMille ensures that there are plenty of equally skimpily clothed handmaidens and dancers lurking in the background. For a movie made in 1934, it’s remarkably en point when it comes to selling sex to the masses. And that’s without all the writhing and the coquettish looks and the inference that life in Rome and Egypt was one long round of hedonism punctuated by the occasional war.

But while DeMille keeps the focus mainly on a number of entertainments and festivities that litter the movie, the story suffers as a result. While the basics are there, this isn’t the movie to quote as an historical record. That aside, Cleopatra’s seduction of Caesar (William) plays out against a backdrop of Egyptian political intrigue before shifting to include Roman political intrigue (“Caesar! Beware of the ides of March!”), and her subsequent romantic entanglement with Mark Antony (Wilcoxon) plays out against a backdrop of Egyptian and Roman political intrigue. It’s a two-act movie with both acts appearing interchangeable with one another, and with only the contrast between William’s starchy Caesar and Wilcoxon’s rambunctious Antony to let the viewer know which one they’re seeing. It doesn’t help that the movie is also littered with some of the worst dialogue in an historical epic heard before or since (Caesar: “I picked a flower in Britain once, the color of your eyes”). The performances are reasonable in comparison, but Colbert has a hard time convincing the viewer she’s someone that one powerful man could fall in love with, let alone two – and in quick succession.

This being a Cecil B. DeMille movie though, the acting, the script and the dialogue are the least of the director’s worries. What’s important here is the spectacle, the sense of immense proportions and its impact. This is a movie that screams “production designed to within an inch of its gaudy life”. There are sets the size of football fields, with ceilings that remain out of sight no matter how hard you look, and rear walls that are so far back from the camera they might as well have their own time zone. It’s excess on a super-grand scale, and DeMille keeps the camera lingering over the sheer enormity of it all, from Cleopatra’s barge to her triumphant arrival in Rome (which was overshadowed by Joseph L. Mankiewicz’s 1963 version). Victor Milner’s lush, exuberant cinematography captures it all (he also won an Academy Award for his efforts), but it’s the efforts of uncredited art directors Hans Dreier and Roland Anderson, along with costume designer Vicky Williams (also uncredited) that truly stand out. Without them, DeMille would have had a movie with no sets and naked stars. (And he would probably have been fine with that.)

Rating: 6/10 – a turgid script by Waldemar Young and Vincent Lawrence is rescued in entertainment terms by DeMille’s insistence on everything being more sumptuous than is humanly possible, and with as many scantily clad starlets hovering around as possible; the story is weak, the chemistry between Colbert and William is something that never convinces, and Wilcoxon at times looks and sounds like Guinn “Big Boy” Williams – and that’s definitely not a compliment.