Fast approaching thirty, Leigh London (Bell) is a journalist working for the Associated Press in New York City. When a piece she writes about a tiger cub kept as a pet in someone’s home isn’t given the prominence she feels it deserves, she takes issue with her boss (Ramamurthy) – who is also her lover. When she learns he’s newly engaged to someone else, it proves too much, and she decides to return to her family home and rethink what she’s going to do. She takes a job as a lifeguard, and re-connects with some old friends, including art appraiser Todd (Starr), and school vice principal Mel (Gummer). Through her new job, Leigh comes to know a couple of teenage boys – artistic Matt (Shaffer), and skateboarder Jason (Lambert). Both boys want to quit school and head for Vermont, but a burgeoning relationship with Jason means Leigh doesn’t want him to go. With their friendship becoming more and more serious, it causes problems for Mel: as vice principal she has a duty to report any inappropriate relationships involving a student. But Leigh’s need for Jason to stay has tragic consequences…

The feature debut from writer/director Liz W. Garcia, The Lifeguard is a tough sell of a movie, a pained and painful examination of one woman’s headlong rush into self-pity, and the inappropriate behaviour that she uses to make herself feel better. It’s hard to think of another movie that has its central character behave in such a selfish fashion, and which still asks the audience to view her actions with sympathy and understanding. It’s a difficult ask, as Garcia paints Leigh as a victim right from the start, whether it’s in the way she throws away her job without a second thought, or the fact that she does nothing to express her anger at being so poorly treated by her boss. Back in her hometown there are plenty of moments where we see Leigh looking forlorn or thoughtful or pensive, but while you might expect these moments to be examples of Leigh planning her next move, instead, Garcia has her use Matt and Jason to score some pot. She also involves Mel, who with her husband, John (Harto), is trying to have a baby, and whose position as vice principal becomes instantly compromised. 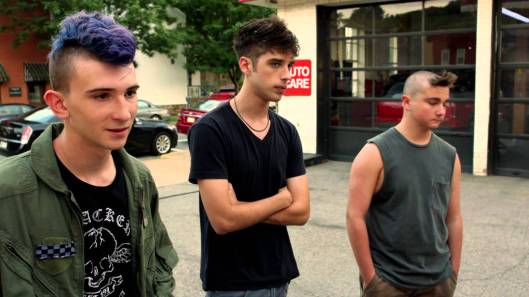 That Leigh does all this – as well as just turning up at her parents’ house without notice – and without any consideration of her friends, or her family, and especially Jason, harms the movie irreparably. There’s no sense of responsibility, only a need for self-gratification that Garcia is unable to offset with any feelings of regret until it’s too late. This should have been a movie where the main character uses returning home as a chance to gather their thoughts and reconnect with a simpler time, but Leigh makes everything worse with every effort she makes. She makes fun of her mother’s attempts to start a new fitness business, she causes a wedge between Mel and John to develop, she keeps Jason in town out of selfish need, and enters into yet another illicit relationship. Sadly Bell, though she’s a more than capable actress, can’t find a way to mitigate against the choices Garcia has made for her character. Left stranded by the narrative, the actress does her best, but like her fellow cast members, she’s unable to make this memorable or affecting or even partway satisfactory.

Rating: 4/10 – with the indie clichés coming thick and fast, and in service to a script that lacks the depth needed to make it more compelling (or just agreeable), The Lifeguard wastes any opportunity it had to provide viewers with a convincing tale of one woman’s emotional downward spiral; passable if you’re in an undemanding mood, it’s a movie that tests the patience and the charity of the viewer at every turn.