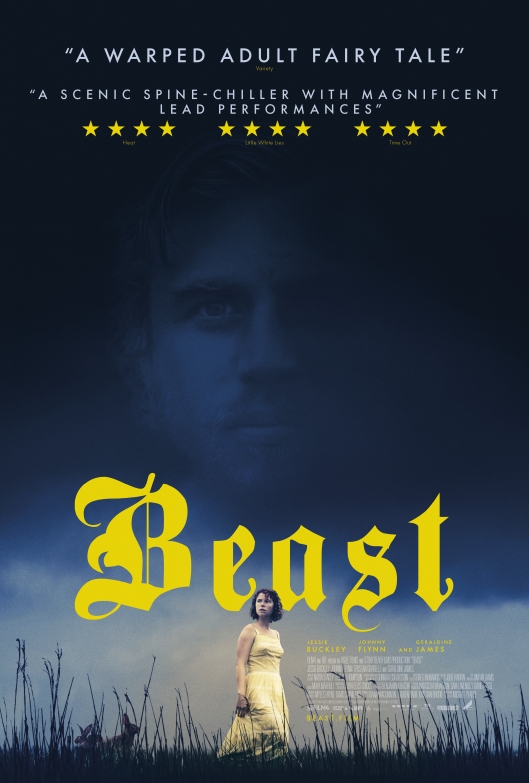 On the island of Jersey, three young women have been murdered recently and the killer is still at large. Moll Huntington (Buckley) is a twenty-something tour guide who still lives at home with her parents. On the night of her birthday, she leaves the party her mother (James) has organised, and heads to a nightclub, where she meets a young man (Rothwell), who later tries to take advantage of her on their way home. She’s rescued by local poacher and odd job man Pascal (Flynn), and the pair strike up a tentative romance. That same night, a fourth girl is abducted and later found murdered. Suspicion points toward Pascal, who has a violent history, but Moll has become so infatuated with him that she lies to the police about being with him the whole time she was at the nightclub. However, doubts about his innocence begin to plague her, and when she learns about his past, this causes her to doubt him even more. When a break in the case appears to clear Pascal, it’s still not enough to convince Moll, and she starts to challenge what seems to be the truth…

Based very loosely on the real life Beast of Jersey who broke into homes at night and attacked women and children during the 60’s and 70’s, Beast is a psycho-drama that is heavy on atmosphere, and rife with undercurrents of dread and barely contained mania. There’s madness here too, but the source isn’t what (or who) you might expect, as writer/director Michael Pearce slowly unravels the identity of someone who isn’t the Beast, but who is, in many ways, far worse. Both Pascal and Moll have violent pasts – she stabbed a fellow pupil when she was thirteen as revenge for bullying, he assaulted his girlfriend of the time – and Pearce explores the different mindsets that have kept both of them from having any real friends, or from being in a long-term relationship. They’re both outsiders, Pascal because he doesn’t “fit in”, and Moll because she doesn’t want to. Together their different social exclusions help them bond and this bond allows a twisted form of romance to develop. But as the movie progresses, and we learn more about them, Pearce reveals that their relationship is less of a romantic connection, and more of a strange co-dependency.

Pearce places this odd, and very disturbing central relationship against a backdrop of bucolic imagery that hints at darker deeds to come, and which also offers little in the way of comfort for the easily dismayed viewer. Bolstered by two terrific performances from Buckley and Flynn, the movie works best when it’s exploring Moll’s tortured psychological motivations, with Buckley navigating the kind of dark emotional territory that is both unnerving and frightening for the scale of its intensity. Flynn makes Pascal more of a tragic figure than he first appears, and though his past misdeeds point at the poacher being involved in the murders, there’s an ambiguity that remains in place even when Pearce affects a narrative sleight of hand that changes things irrevocably for both Moll and Pascal. But this sleight of hand also means that the movie goes off at a tangent that isn’t anywhere near as convincing as what’s gone before, and it raises more questions than Pearce’s screenplay has answers for. It’s a shame, as up until then, the movie is a confident, tightly controlled thriller that plays with audience expectations, and which offers complex characterisations instead of the usual thriller-style stereotypes. It’s also beautifully composed and shot by DoP Benjamin Kracun, and features an eclectic but effective score by Jim Williams.

Rating: 7/10 – a compelling, and malice-filled first feature from Pearce, Beast isn’t quite the sum of its parts, but when it’s being mysterious and malignant, it’s hard to look away for fear of missing something either horrible or important, or both; Buckley is outstanding, but the secondary characters, including James’s stern-faced mother and Gravelle’s lovelorn policeman, aren’t as well developed, while Maya Maffioli’s sometimes hesitant editing doesn’t always allow certain scenes to flow as smoothly as they should.