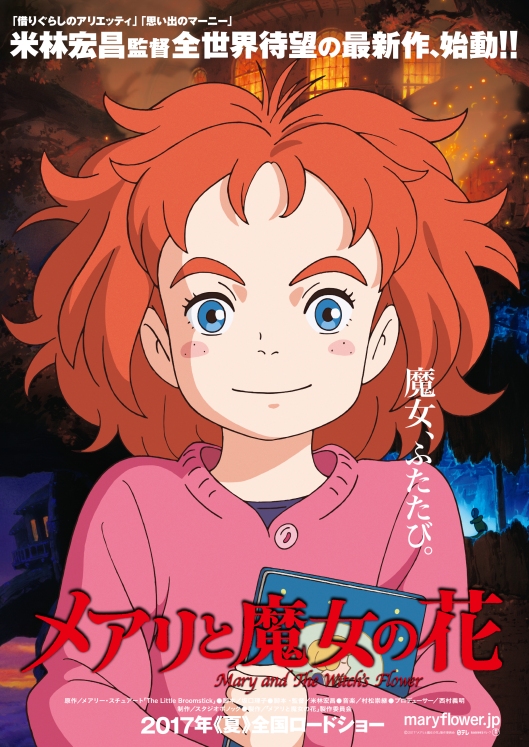 Mary Smith (Sugisaki) is a young girl spending the summer with her Great-Aunt Charlotte (Otake) in the British countryside. A local youngster, Peter (Kamiki), teases her about her red hair (which she hates), but it’s his two cats, Tib and Gib, who lead her into finding some mysterious blue glowing flowers in the nearby woods. Said to contain magical powers, Mary learns the flowers are called “fly-by-night”, and when she later discovers an old broomstick in the woods and accidentally crushes one of the flowers against it, the broomstick comes to life and whisks Mary and Tib to a wondrous place hidden in the clouds called Endor College. Mistaken for a new trainee witch, Mary meets Madame Mumblechook (Amami), the headmistress, and Doctor Dee (Kohinata), the chemistry master. When Mary admits that the source of her magic is a fly-by-night, and that Tib isn’t her familiar, but Peter’s cat, she is allowed to leave. But the next day, and with the magic worn off, Mary receives a message from Madame Mumblechook telling her that unless Mary gives up the remaining flowers, Peter (who has been abducted) will never be seen again…

The first feature from Studio Ponoc, the company founded by ex-Studio Ghibli producer Yoshiaki Nishimura, Mary and the Witch’s Flower is an appealing, deftly handled movie that makes up for what it lacks in depth and narrative ambition, by creating a marvellously detailed and often beautiful fantasy world hidden above the clouds. Adapted from the children’s book The Little Broomstick by Mary Stewart, the movie proper begins wistfully enough with nostalgic representations of the English countryside that have a timeless feel to them, and the kind of small village ambience that speaks of a bygone age. Yonebayashi, along with co-screenwriter Riko Sakaguchi, invests these early scenes with a bucolic nature that is attractive and reassuring, even as the script begins to introduce hints of the troubles to come. There’s an increasing sense of unease that develops, as Endor College gradually reveals its secrets, and the motives of Madame Mumblechook and Doctor Dee become more evident. But then the narrative, boxed in by the requirement that fly-by-night induced magic only lasts for twenty-four hours, becomes episodic, and loses some of the momentum it’s built up until then. Cue a handful of set pieces that feel isolated from each other, and  though the animation is often majestic, it’s in service to material that doesn’t entirely resonate. 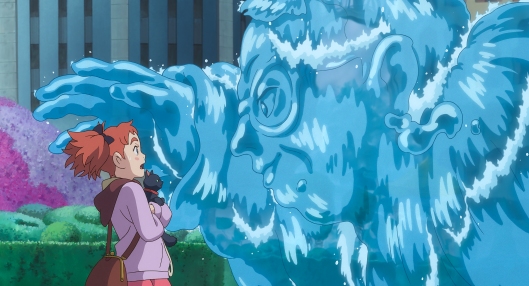 That said, Mary is a likeable heroine, endearing in her clumsiness and brimming with increased confidence with every magical encounter. As she grows into the role of the world’s saviour, she tackles each obstacle with growing determination and acuity. She’s another in the long line of animated heroines that viewers can warm to from the start. Inevitably, there will be comparisons with the output of Studio Ghibli, and while some of those comparisons may be invidious – and rightly so, there’s still room for movies such as this one, that takes the ideals and the commitment to traditonal hand-drawn animation that epitomised Studio Ponoc’s predecessor and helps keep them alive. Though the storyline and the narrative may not be as sharp as they could be, the movie’s visual stylings are still a joy to explore and experience, and there’s an inventiveness that could only come from the unique mindset of Japanese animators. As a first feature, Studio Ponoc should be congratulated for trying to make movies that honour the spirit and adventurous nature of the Studio Ghibli output, and if they haven’t quite succeeded in their aim then, hopefully, there will be plenty of opportunities in the future to do so.

Rating: 7/10 – with exactly the kind of stunning animation that we’re used to seeing from movies such as this, Mary and the Witch’s Flower is a visual treat: vibrant, colourful and just plain gorgeous to look at; the slightness of the story lets it down, as well as the stop-start approach in the latter half, but this is still exemplary stuff from a company that can only get better and better.