Starr Carter (Stenberg) is a sixteen year old black girl living in a predominantly black neighbourhood – Garden Heights – but who attends a predominantly white prep school, Williamson. One night, while at a party, she reconnects with a childhood friend, Khalil (Smith). Later, as Khalil takes her home, they’re pulled over by a white police officer, who insists Khalil gets out of the car. When Khalil reaches into the car for a hairbrush, the officer thinks he’s going for a gun, and reacts by shooting Khalil dead. The shooting causes a local outcry, but Starr’s involvement is kept a secret, even from her best friends (Carpenter, Lawless) at Williamson, and her white boyfriend, Chris (Apa). But as racial tensions increase, and Starr is required to testify before a grand jury, matters are further complicated by the attentions of local gang leader, King (Mackie), who doesn’t want Starr saying anything about Khalil selling drugs for him. Torn between keeping quiet and not putting herself or her family at risk, and honouring Khalil’s memory, Starr must find the courage to chart a course that ensures she does the right thing…

A contentious and powerful adaptation of the novel by Angie Thomas, The Hate U Give doesn’t shy away from tackling some pretty serious issues, and does so in spite of its YA backdrop, proving that the genre can address issues beyond dystopian futures and awkward romantic entanglements. And while the continuing effects of cultural and political racism are front and centre, the movie also delves into topics such as social deprivation (Garden Heights isn’t exactly an affluent neighbourhood), peer pressure, police accountability, gang culture, cultural appropriation, and political activism. It’s a heady brew, and as such, a challenge for any one movie to assimilate without running the risk of minimising the impact or importance of any one aspect at the expense of the others. But Audrey Wells’ screenplay is one of the best literary adaptations of recent years, and it addresses each issue succinctly and with a great deal of care, and ensures that the viewer understands the effects that each issue has on the characters. Whether it’s the injustice felt by a community that has already seen too many people die unnecessarily, or Starr’s increasing unhappiness at the way her friends behave as “black” because it’s “cool”, the movie refuses to treat these issues lightly, or inappropriately (as the kids at Williamson do). 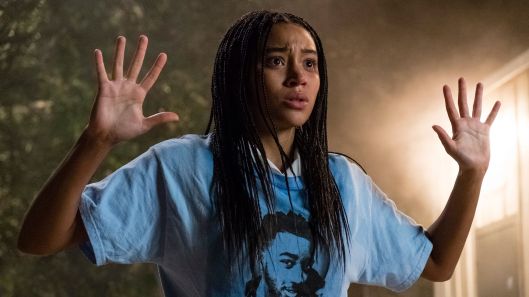 With the script locked in, it’s left to the performances to amplify the importance of the issues the movie explores. As Starr, Stenberg gives one of the best performances of the year, courageously tackling her role head on, and always finding the emotional truth in any given scene. It’s such a mature portrayal, so nuanced and impressive, that on the rare occasions Starr isn’t the focus of a scene, you can’t wait to have her back. There’s fine support from Hall and Hornsby, and Smith proves that his break-out performance in Detroit (2017) wasn’t a flash in the pan. Tillman Jr has assembled a powerful, hard-hitting movie, but despite the quality of Wells’ script and the quality of the performances, it’s a movie that is often more effective in its quieter moments than when it seeks to escalate the tensions inherent within it. A protest march that descends into violence feels timid in relation to the emotions it’s engendered, while the sequence where Starr and Seven are trapped in their father’s burning store is over before any real threat to their lives can be allowed to create any tension. Minor bumps in the road such as these, however, do serve to distract from the good work the rest of the movie revels in, and as they come in the last half hour, unfortunately they undermine some of what’s gone before. But even so, this remains an intense and vigorous exploration of issues that rarely get addressed with this much clarity and confidence.

Rating: 8/10 – despite a few narrative leaps and bounds designed to wrap things up more quickly than necessary, and a few soap opera moments that always feel out of place, The Hate U Give is a vivid, potent examination of America’s continuing racial divide; with its superb central performance, and its ability to tackle complex issues without resorting to being dogmatic or condescending, it’s a significant reminder – as if it has to be said – that all lives matter.

Like many extreme incidents of violence and aggression, the 12th Street riot began in somewhat innocuous fashion with a raid on an unlicensed underground club, a “blind pig” frequented by blacks. As everyone at the club was being loaded into police vans, a crowd gathered and began throwing rocks at the police, and when they had left the scene, the crowd – now more of an unruly mob – began destroying and looting any and all surrounding stores and properties. This was 23 July 1967. It was the beginning of one of the worst recorded outbreaks of civil disobedience in the entire history of the US. It lasted for five days, and during that time forty-three people died, 1,189 were injured, over 7,200 were arrested, and over 2,000 buildings were destroyed. Only the 1863 New York City draft riots, and the 1992 Los Angeles riots were worse.

By the third night, the situation had grown so bad that President Johnson authorised the use of federal troops in aiding the police in their attempts to quell the rioting. With the city of Detroit under a quasi-martial law, the looting and the destruction and the violence continued. Against this backdrop, director Kathryn Bigelow has chosen to tell the story of the Algiers Motel incident, a tragic event that saw three people die, and a trio of police officers arrested for murder. Working again with Mark Boal, the screenwriter of her previous two movies – The Hurt Locker (2008), Zero Dark Thirty (2012) – Bigelow has fashioned an incredibly tense, incredibly gripping thriller that grabs the viewer’s attention from the start, and thrusts them into the midst of the violent upheaval that occurred that fateful summer.

Bigelow is a bravura movie director, and she makes Detroit a visceral experience, hard-hitting and uncompromising, blending contemporary footage with the movie’s recreation of the period to brilliant effect. It’s the closest anyone is likely to get to being in an urban war zone, and Bigelow knows just how to ramp up the tension and make the movie as gripping as possible. From the moment when a young man named Carl (Mitchell) decides to have fun with the National Guard and the police by firing a starter pistol out of a window at the Algiers Motel, and in their direction, the sense of impending doom is palpable. It’s just the excuse that two particular cops, Krauss (Poulter), and Flynn (O’Toole), need: to be the heroes who apprehend the “sniper” at the Algiers Motel. Along with a third officer, Demens (Reynor), they soon make their presence felt at the motel, and within moments, one black man is dead and everyone else the cops have discovered are being forced to stand face first against a wall and keep quiet so that Krauss and his fellow officers can track down the sniper. What follows is a powerful examination of implicit racism applied in a pressure cooker environment. Krauss won’t believe anyone who says they didn’t see a sniper, or who says they didn’t even see a gun. He has to be sure, and what better way to get at the truth than by intimidating, bullying, abusing and beating the truth out of them?

As the movie continues, Detroit‘s sympathies lie very obviously with the people at the motel, including two white girls, Karen (Dever) and Julie (Murray), and a handful of black men, including would-be singer Larry Reed (Smith). As the tension grows, Bigelow successfully avoids making these characters mere ciphers, and uses the situation to inculcate audiences with just how they behave or react, whether it’s defiantly, bravely, or by being just plain scared. As Krauss’s psychopathy keeps everyone praying to be spared, a game of intimidation spirals out of control and the barely thought out motivations of Krauss and his fellow cops is exposed for the superficially “clever” institutional racism that dictates their every move. It’s horrifying to watch, and is made all the more horrifying by the casual evil displayed by Poulter as the intentionally duplicitous Krauss (it’s worth noting that Poulter is still only twenty-four, and his performance, while atypical, is also astounding).

With the inherent tension in place and Bigelow tightening the screws at every turn, the wider cultural and social implications of the events that night are allowed to seep out around the narrative and add a further layer of discomfort to what the viewer is witnessing. Providing a counterpoint to Krauss’s predatory racism is the passive presence of store security guard Melvin Dismukes (Boyega). Drawn to the Algiers by the sound of the “gunfire”, Dismukes at first appears to be our eyes and ears on the inside, a witness to the horrors perpetrated by the police. But Dismukes’ presence proves disconcerting, as he soon adopts the role of quiescent observer, ever watchful but effectively complicit in what takes place. The initial bravery and diligence he shows when we first meet him is shorn away to reveal a man who shrinks before our eyes as the movie progresses. In contrast we see the unprompted heroism of the two young white girls, trapped in the wrong place at the wrong time and victims of violence, sexist rhetoric and inverse racism. Bigelow isn’t making any comments about “good whites and bad blacks”, or even “bad whites and good blacks”, instead she’s making the point that the decisions we make in extreme circumstances, such as the Algiers Motel incident, affect us all differently in the long run (though in Krauss’s case you’d have to argue that there’s no effect at all).

Valid notions of causality and pre-determinism aside, Detroit works best by not appearing to judge why the riots happened, or to provide a wider historical and cultural context for what did happen. That’s for another movie altogether, and Bigelow and Boal are right to keep their focus on events at the Algiers Motel, and for using them to explore the riots in microcosm, whether it’s through the yielding eyes of Dismukes, or the desperate, traumatised eyes of Larry Reed. Some viewers may find the aftermath of the riots more disturbing than the riots themselves, as Detroit picks itself up and dusts itself down and restores order in the best way it knows how: by refusing to acknowledge that “the establishment” did anything wrong. That’s an issue that is very much in the contemporary eye right now, and if Bigelow ever intended to make a political statement through her movie, that would be it.

Rating: 9/10 – a movie that burns brightly in its attempts to provide immediacy with a contemplation of the events of 25 July 1967, Detroit is a fierce, intelligent, provocative, and often incendiary piece of movie making from an equally fierce, intelligent and provocative movie maker; with exemplary cinematography from Barry Ackroyd, and practically precision-tooled editing from William Goldenberg and Harry Yoon, this is a movie that lingers in the mind and provides enough food for thought for three movies, let alone one.