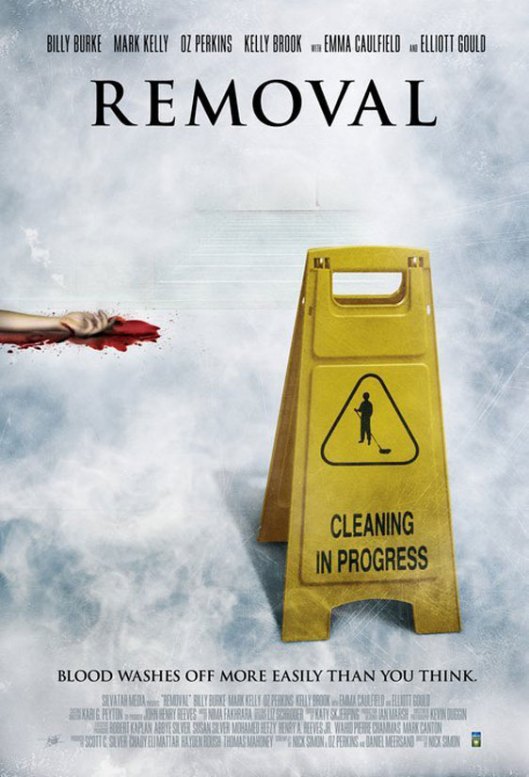 At the end of his work day, contract cleaner Cole (Kelly) is persuaded to visit a potential client, Sharpe (Perkins) and provide him with an estimate for the work he requires.  When Cole arrives he finds himself bullied into taking on the job, cleaning a very large mansion, that same night.  He also begins to suspect that Sharpe has killed his wife and child and that their bodies might still be in the property.  As he becomes increasingly convinced of their demise, so begins a deadly game of cat-and-mouse with Sharpe, a game that quickly escalates into something both unexpected and much grimmer.  And to complicate matters, Cole has a secret of his own…

An uneasy, well-directed thriller, Removal has an edgy, almost hallucinatory quality from the off that helps keep the viewer wrong-footed as the plot advances from its standard everyman thrust into uncharted territory beginning, to its clever denouement.  Set largely within the confines of Sharpe’s mansion, the movie prowls the empty rooms and corridors along with the increasingly suspicious Cole, and as the viewer is drawn into the mystery of whether or not Sharpe has killed his family, two things become evident: that Removal will confound expectations, and that it will prove to be a worthwhile viewing experience.  Much of the storyline is overwhelmingly familiar but in the hands of writer/director Simon and his co-writers Daniel Meersand and Oz Perkins, the familiarity is overlaid with a disconcerting sense that, at any moment, the rug is going to be pulled out from under the viewer’s feet.  And so it proves: two thirds of the way in, the game changes, and it’s a tribute to the creative minds behind Removal – not to mention the committed cast – that it works as well as it does.

As the main protagonist, Cole, Kelly imbues his character with a measured hang-dog quality, his personal circumstances dictating the ease with which Sharpe manipulates him.  Kelly is never less than believable throughout, and is matched by Perkins (son of Anthony).  Sharpe is an arrogant bully, judgmental and quick to undermine Cole’s already fragile self-esteem.  Perkins plays him with a steely disdain for those he perceives as weaker than himself, and yet he still possesses an off-kilter charm.  Burke acquits himself well, too, despite having less screen time, as an acquaintance of Cole’s, Eric, who finds himself drawn into the mystery.  In smaller roles, Caulfield as Cole’s wife, and Brook as an unlikely estate agent, make an impression, but the one disappointment is Gould: his lines are delivered with all the enthusiasm of someone awaiting root canal treatment.

There’s atmospheric photography courtesy of Kevin Duggin, and a complementary score provided by Nima Fakhrara.  On the negative side, the movie relies a little too much on its game changer to facilitate its ending, and while there is a logical outcome to events, the movie places Cole and Eric in a potentially never-ending situation that could presage a sequel at some point – but which would be unnecessary – and spoils the effect of what has gone before.  However, it’s easy to see why the filmmakers went with the idea.

Rating: 7/10 – an old-fashioned has-he-dunnit tricked out with a more modern sensibility, Removal rewards the viewer by not “talking down” to them; intelligent and very well crafted. 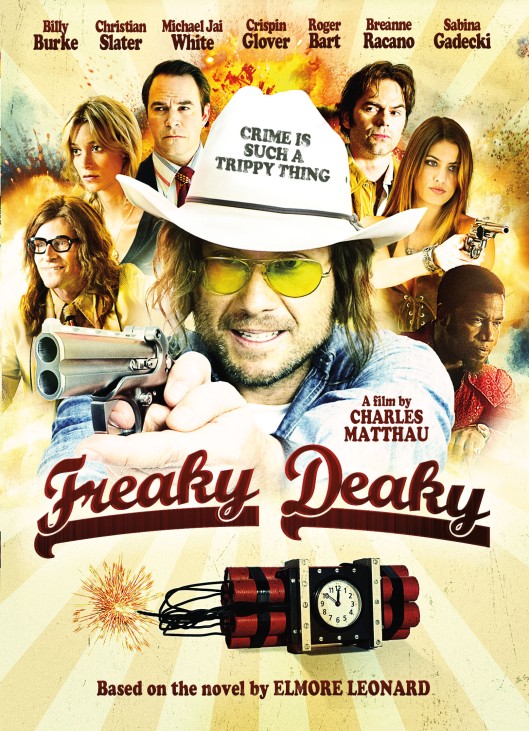 When bomb squad detective Chris Mankowski (Burke) transfers to Sex Crimes he meets Greta (Gadecki) who reports she was raped by multi-millionaire pothead Woody Ricks (Glover). Ricks’ arrest leads to strings being pulled and Mankowski being suspended. Determined not to let Ricks get away with it, Mankowski agrees to help Greta get some financial compensation from Ricks. Meanwhile, two 60’s radicals, Robin (Rocano) and Skip (Slater), convinced that Ricks gave testimony that led to their being imprisoned, plot to relieve him of the $50 million he’s just inherited. To do this they  plan a bombing campaign that will frighten him into paying up. In the middle of all this is Donnell (White), Ricks’s bodyguard-cum-personal assistant. He ends up as the go-between for all parties, while trying to defraud his boss of the $50 million himself.

An adaptation of the novel by Elmore Leonard (his personal favourite, apparently), Freaky Deaky – as adapted by writer/director Matthau – has an air of listlessness that it doesn’t quite shrug off, despite some good casting, and a neat line in Leonard’s trademark dialogue. On the page, Leonard’s plots fairly zing and fizz with an energy born from Leonard’s sparse prose. Here, that energy is missing from a movie that fails to generate more than a Chinese burn of excitement. The result is that Freaky Deaky plods from scene to scene without really drawing its audience in, which is a shame as the structure is sound, and as mentioned above, the cast are well-matched to their roles (Slater continues his mini-renaissance with a well-judged take on a mild-manic bomb maker) and there’s some great visual gags (Ricks’s car in the driveway, Ricks trying to put on his pants). 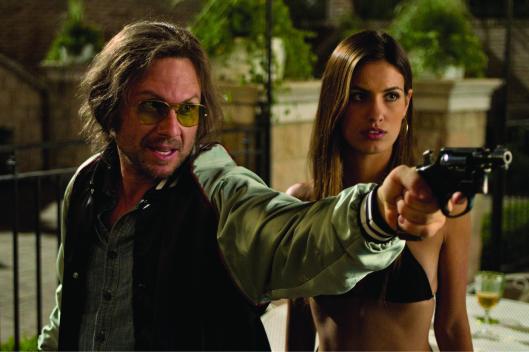 Of the rest of the cast, Burke is saddled with a good guy role that lacks shading, while Glover almost steals the show as the permanently drug- and alcohol-addled Ricks, all vacant stares and poor co-ordination. I say almost because White just beats Glover into second place, playing a seen-it-all ex-con dealing with each successive twist and turn of the plot with weary resignation and some of the best, drollest dialogue on offer. But while the male cast fare well, the same can’t be said of Rocano and Gadeski.  As Robin, Rocano sails perilously close at times to coming across as merely a one-note revenge-seeker, while Gadeski does her best to avoid being just eye candy. It’s not their fault, just the way the script has been written.

Matthau has been quiet since 2005’s rom-com Her Minor Thing, and while he’s to be congratulated for persevering through Freaky Deaky‘s troubled production – its original cast, including Matt Dillon, Brendan Fraser and Katie Cassidy, were replaced by Burke et al in 2011 – the end result is a disappointment. There’s no flow to the scenes, and it’s obvious the budget was an issue, but even with all the obstacles in the movie’s way, it deserved better. There are few really good adaptations of Elmore Leonard’s work out there, and sadly this isn’t one of them.

Rating: 5/10 – not as impressive as it could have been given its cast, but helped immeasurably by them, Freaky Deaky serves as a reminder that adapting a well-written, well-received book isn’t as easy as it looks; one for Leonard completists only.