Will (James) and Sam (Graham) are a young couple living in Seattle who have recently discovered they are going to have a baby. Will flies to Chicago to ask Sam’s father, Tom (Whitaker), for his blessing to marry her, but the evening goes badly due to Tom’s domineering nature. The next morning, as he prepares to fly back to Seattle, Will is talking to Sam on the phone when something mysterious happens and the line is lost. Heading back to her parents’ home, Will finds Tom ready and packed to travel across country to Seattle to find Sam. With all flights grounded, Will goes with him. Their trip is fraught with all sorts of dangers, particularly when an encounter with a police cruiser leaves their car banged up and Tom with a couple of broken ribs. Reaching a small town, they meet Ricki (Dove), a car mechanic with plans to head west. Tom convinces her to come with them, and as they head towards Seattle, the mystery of what happened on the West Coast becomes ever more puzzling. With the US heading into a post-apocalyptic future, the trio have to overcome a number of threats and obstacles in order to find Sam and ensure she’s safe… 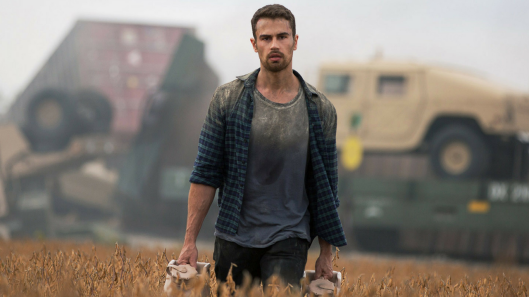 The script for How It Ends – by Brooks McLaren – was on the 2010 Black List of highly regarded yet unproduced screenplays. Now that it has been made, it would be interesting to make a comparison between the original Black List script and the final version used here, because this is yet another occasion where the initial hype is very far from justified. For one thing, the characters are paper thin, and barely fleshed out beyond their screenwriting 101 archetypes. Will is a lawyer but his occupation hardly matters as he has no personality or recognisable character traits to make him stand out in any meaningful way. Tom is the classic overbearing father, convinced no one is good enough for his “little girl” and initially dismissive of Will’s presence and minimal capabilities (during the encounter with the police cruiser, he can’t even use a gun properly). Of course, the pair will bond over time, and mutual respect will be formed, but here it happens almost as an afterthought, as if McLaren had forgotten about it, and then realised he needed to tick that particular narrative box before it was too late. The secondary characters are even less interesting, there to help move things along as and when necessary, though Ricki does add a little flavour to proceedings (though this is largely due to Dove’s performance, which looks out of place because she’s actually trying).

The narrative relies on too many moments of convenience – Tom talks their way through a military roadblock, Will convinces a town sheriff to let them through a barricade – and it creates danger at nearly every turn, with almost everyone they meet on the road out to rob them or kill them or both on nearly every occasion. This wouldn’t be so bad if director David M. Rosenthal was able to make these sequences tense or suspenseful, but there’s much that goes wrong in the editing of these sequences, so much so that they lack any appreciable impact, leaving them to slot into a movie that proceeds along a steady, measured pace for much of its running time. The mysterious occurrence on the West Coast goes unexplained for the most part (though there is a conspiracy theory trotted out near the end that is meant to sound plausible but isn’t), and its effects vary from late scene to late scene, until the movie climaxes with a final image that will literally have viewers saying, “This is how it ends…?” But by then, it will have failed to matter long before, making this an apocalyptic event that could have done us all a favour.

Rating: 4/10 – with nods to the breakdown of civilisation that is always expected to occur in these occasions (but within a day or two – and country wide?), How It Ends strives for relevance where it doesn’t need to, and aims for resonance where it doesn’t have to, making this a turgid trip through a less than convincing post-apocalypse Twilight Zone; with no one to connect to, and a series of repetitive encounters with people who have conveniently “turned bad” at the drop of a hat, the movie struggles with a number of ideas it doesn’t know what to do with, and instead of trying, it settles for being banal and dramatically commonplace.

Tatiana Mills (Rush) is fifteen years old when she decides to start writing letters to island dictator, Anton Vincent (Caine). Intrigued by her letters, Vincent writes back, and the pair develop a pen pal relationship that involves Tatiana telling him about her life and problems, and Anton proffering advice on how to deal with them. Many of her problems revolve around school (where she’s not the most popular girl), and her relationship with her mother, Darlene (Holmes). When Anton is the victim of a coup d’etat and has to flee his island country, he heads for the US, where Tatiana finds him hiding out in the garage. In return for allowing him to stay with them, Tatiana and Darlene let Anton help out with various jobs around the house, and continuing to help Tatiana with her problems. While Darlene becomes more confident in how to deal with her boss (and lover) Dr Seaver (Green), Anton teaches Tatiana how to deal with the girls who pick on her, and how to become a rebel – just like him. But the authorities are getting closer to finding him…

Yet another movie that has its origins in an unproduced Black List script – this time from 2006 – Dear Dictator is ostensibly a comedy that strives for relevance but falls well short thanks to its depiction of Anton as a sub-par Castro lookalike, and Tatiana’s tired teenage problems. It doesn’t help either that Anton vacillates between being a hard line dictator and a kindly surrogate grandfather figure. By adopting this approach to the character, writer/directors Addario and Syracuse miss out on the chance to make Anton’s stay in suburbia a truly subversive experience. Instead of making him a good man at heart, how much more satisfying it would have been if his extreme political practices had led to Tatiana adopting more than just his advice on how to deal with bullies. The movie makes a half-hearted attempt at this, but pulls Tatiana back from the edge before things can get too serious (it is a comedy, after all). Likewise, Tatiana’s problems are the stuff of too many previous movies to prompt much more than tired acknowledgment, followed quickly by deeply lodged ennui. As their relationship develops, the script shifts the balance of power between them backwards and forwards until one of them is required to make a wholly expected sacrifice.

So what we have here is an unproduced Black List script that could probably have written itself, such is its reliance on the clichés of teen dramas, and its determination to make Anton more sympathetic than dangerous. With both its central pairing and its central dynamic proving so unrewarding, there’s only Darlene’s interaction with Dr Seaver to fall back on. Ranging from exploitative to criminal (and with an element of co-dependency thrown in for good measure), their relationship provides the subversive ingredient the movie needs so desperately elsewhere (it’s certainly disturbing to see Green licking Holmes’s toes with such relish). But it’s not enough to rescue the movie from avoidable mediocrity, and despite surprisingly good performances from Caine, Rush and Holmes (particularly Holmes), it’s Addario and Syracuse’s inability to give the movie a coherent through line or tone that damages it most of all. Falling foul of that old no-no, the consecutive scenes that have no relation to each other, Dear Dictator is disjointed and unsure at times if drama or humour is the more appropriate context for the material it’s dealing with. Which is awkward as this is clearly meant to be a comedy – probably.

Rating: 4/10 – some of Caine’s more recent choices haven’t been the best, and Dear Dictator is another one to add to the list (though it’s not in the same league as Jaws: The Revenge (1987) – and what could be?); with only a fleeting awareness of how uneven it all is, the movie loses its way very early on and never finds its way back.