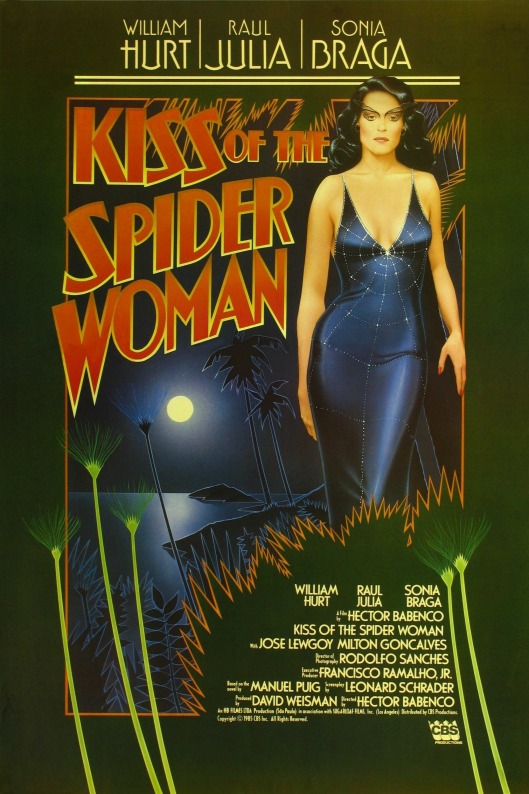 During the time of the Brazilian military government, two men with very different backgrounds find themselves sharing a prison cell. Valentin Arregui (Juliá) is a leftist revolutionary who has been imprisoned and tortured because of his political activities. Luis Molina (Hurt) is a transgender woman who has been jailed for having sex with an underage boy. Luis passes the time by recounting scenes from a wartime romantic thriller, her favourite movie, and this helps to soothe Valentin’s despair at being imprisoned. An unlikely friendship begins to develop between them, and Luis, whose political beliefs are quite shallow, becomes more politically engaged. As time passes, Luis’s cinematic stories are phrased in such a way that Valentin’s lover, Marta (Braga), becomes a featured character as the mysterious Spider Woman, while at the same time, Luis’s feelings toward Valentin become more and more romantic, a development that Valentin doesn’t discourage. When Luis is unexpectedly granted parole, he agrees to pass on a message to Valentin’s revolutionary comrades. Having arranged a meeting with them, Luis finds that needing the love of a good man carries with it more risks than he could ever have expected… 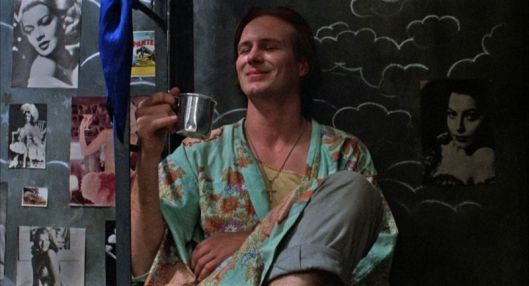 Laced with a deceptive poignancy that only reveals itself fully towards the end, Kiss of the Spider Woman is a bittersweet tale of love and fantasy in the unlikeliest of surroundings. Adapted from the novel by Manuel Puig, it’s a movie that at first glance looks unprepossessing and likely to prove just as emotionally and politically shallow as Luis appears to be. But it’s actually a movie that grows in stature as it develops, stripping away its lead characters’ mannered pretensions and revealing them as flawed, struggling individuals searching – both in their own ways – for a way to maintain a meaningful connection with someone, anyone, in a place designed to take away a person’s humanity. As their friendship develops, and they find a meaningful connection with other, the beauty of this relationship is revealed in its small moments of intimacy and concern. Luis may appear at first to be a stereotypical drag queen with hysterical tendencies, but as the movie unfolds and we get to know him better, he’s revealed to be playing a role, one that’s expected of him, but which also  allows him to survive. Hurt is magnificent in the role, playing against his perceived type at the time, and slowly reveaing the various layers, many of them deeply hidden, that make up Luis’s character and motivate him. 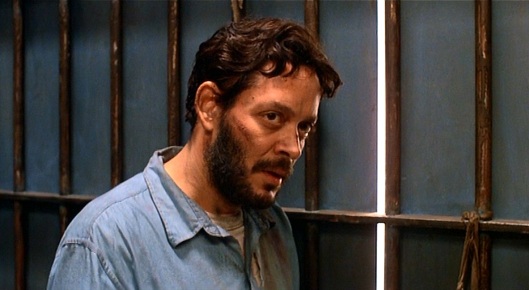 But though Hurt gives the more bravura performance, Juliá matches him for intelligence and intensity, portraying Valentin as a revolutionary whose didacticism speaks of a man whose confidence in his own political credibility isn’t as convincing as he would have Luis – and the viewer – believe. As he becomes seduced by Luis’s fondness for romantic clichés (because they provide an escape he has no hope of finding otherwise), Valentin reveals a personal set of hopes and fears that govern his behaviour even more than his revolutionary fervour. In overturning Luis’ and Valentin’s stereotypical failings, Leonard Schrader’s exemplary script, along with Héctor Babenco’s flawless direction, creates an atmosphere governed by recognisable emotional longings and the need of each character to survive their incarceration by any means necessary. That they find love as a result makes the movie all the more poignant, and all the more affecting. That tragedy inevitably follows shouldn’t come as a surprise, but even then there are personal triumphs for both characters, and the movie ends on a grace note that feels entirely, and beautifully, in keeping with the sacrifices both men have made along the way.

Rating: 9/10 – over thirty years since its release and Kiss of the Spider Woman is still a one of a kind movie, bold in its depiction of romantic attraction, and astonishing for the breathtaking way in which it weaves threads of vibrant fantasy throughout the otherwise melancholy nature of much of its narrative; bolstered by Rodolfo Sánchez’s impeccable cinematography and Mauro Alice’s meticulous editing, it’s a movie that offers surprises throughout, and which remains as impactful now as it was back in 1985.