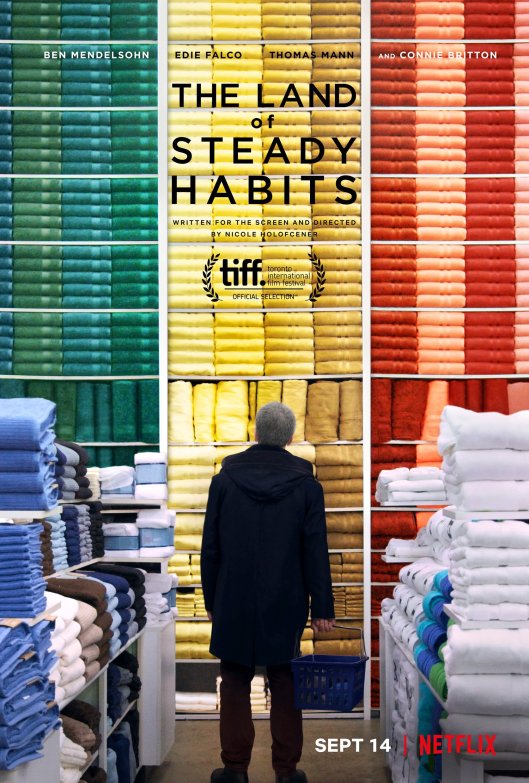 Anders Hill (Mendelsohn) has turned his back on his life as a husband and father, and his work in finance. Divorced and living in a condo, he’s “retired”, but finding it difficult to make his new life work. Casual (and disappointing) hook-ups with women only remind him of his ex-wife, Helene (Falco), and how much he misses her, and the fact that she’s now seeing someone he used to work with, Donny (Camp), makes it even worse. And their son, Preston (Mann), has graduated from university but seems rootless and unwilling to do anything with his life. When Anders is invited to an annual party given by his friends, the Ashfords (Marvel, Gaston), he’s not expected to actually turn up. But he does, and ends up taking drugs with the Ashfords’ son, Charlie (Tahan). When Charlie ends up in hospital that same night, it’s the beginning of an unexpected if not entirely appropriate friendship, while unresolved issues involving Helene and Preston continue to cause friction between the trio, and have a wider effect on Donny and the Ashfords, as well as a woman Anders meets called Barbara (Britton)…

The first movie directed by Nicole Holofcener that doesn’t feature Catherine Keener in the lead role, The Land of Steady Habits is an adaptation of the novel of the same name by Ted Thompson. The title refers to the collection of hamlets and towns that dot the Connecticut commuter line, and their similarity to each other. Anders has decided that he no longer wants to be a part of the “rat race”, and that his happiness has been impeded by his job and his marriage and having to be selfless in providing for everyone around him. But Anders is finding that being “free” brings its own set of problems, some that remain from his previous life, and newer ones that add to his woes. It’s clear he’s not happy, and it’s clear that he has no idea of what he’s doing (we first meet him trying to buy ornaments to fill the shelves in his condo; the choices he makes are less than complementary to each other). He wants to retain a connection with Helene but can’t articulate why, while he’s more in tune with Charlie and his issues with his parents than he is with his own son.

All this is handled by Holofcener (who also provides the screenplay) with her customary sincerity and sympathetic approach to each of the characters, and by doing this she manages to avoid making Anders’ story yet another dull tale of an affluent, middle-class man’s mid-life crisis. She’s helped enormously by Mendelsohn’s sensitive and often poignant portrayal of Anders as a man who is at odds with himself and what he needs out of life. Falco is slightly less well served by the material – Helene isn’t given the room to develop as a character – while Mann is terrific as Preston, with rehab in his past and facing an uncertain future. However, the movie is a mixture of drama and comedy that doesn’t always gel convincingly, the relationship between Anders and Charlie is the kind that exists purely in the movies, and there are times when it seems Holofcener has trouble making certain scenes appear relevant. The result is a movie that feels as if it’s holding itself back, and which, despite the cast’s commitment, always seems to be on the verge of saying something profound – without quite knowing just what it is it wants to say.

Rating: 7/10 – a great performance from Mendelsohn ensures The Land of Steady Habits remains watchable throughout, but the patchy material doesn’t always hold up; ultimately it’s a movie that remains likeable even when it’s not living up to its full potential, and it retains a certain charm that is hard to ignore, but a lot will depend on how much emotional dysfunction you can endure – and not just from Anders. 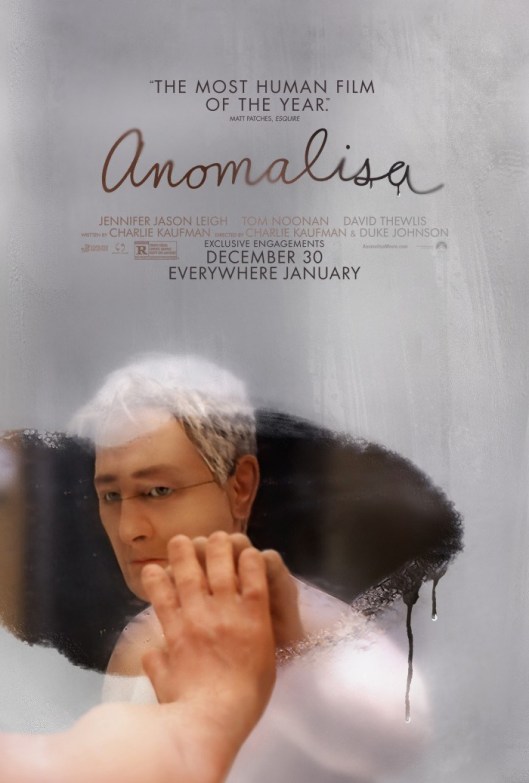 If you’re new to the work of Charlie Kaufman, and haven’t seen any of his earlier works such as Being John Malkovich (1999) or Eternal Sunshine of the Spotless Mind (2004), then Anomalisa may not be the best place to start. Not because it’s a bad movie – very far from it – but because it requires a great deal of navigation to get to where Kaufman wants to take you. You can approach the story at face value: middle aged man suffering a mid-life crisis has a one-night stand while on a business trip, or you can see past the obvious and examine the bizarre psycho-sexual mindset of a man for whom everyone else in the world looks and sounds the same, and for whom personal relationships are a form of existential torture.

By having his lead character suffer from the Fregoli Delusion, a rare disorder where a person believes that different people are in fact the same person but in constantly changing disguises, Kaufman has found a new way to look at how we assess new relationships and how we assign emotional links to new relationships from old ones. It all sounds heavy going, and maybe not the best material for an animated movie, but in fact it’s the perfect approach and style for telling Kaufman’s tale. 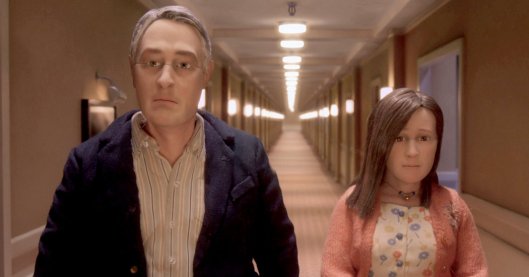 Michael Stone (Thewlis) is a customer service guru. He’s written a well-known and highly regarded book on the subject and he’s arrived in Cincinnati to give a speech the next day. He’s married with a young son and on the ride from the airport establishes that there’s a toy store near his hotel where he can get a gift for his son. At the hotel, called The Fregoli, Stone checks in and goes to his room where he decides to call up an old girlfriend, Bella Amarossi, and see if she’ll meet him for a drink. She agrees and they meet up in the hotel bar. There are recriminations from Bella over the way Michael just upped and left her, and the reunion ends badly when he suggests they go up to his room to “talk more privately”; angered that he just wants to have sex with her, Bella leaves.

With nothing else to do, Michael visits the nearby toy store only to learn that it’s an adult toy store. But he sees a mechanical head and upper torso, with arms, of a Japanese woman behind the counter and he decides to buy it. Back in his room he’s just getting out of the shower when he hears a familiar woman’s voice from outside in the hallway. He dashes out but no one is there. Convinced she must be in one of the other rooms, he knocks on doors until one is opened by Emily. Emily is in town for his speech along with her colleague and best friend Lisa (Leigh). Michael is immediately smitten by Lisa and after the three of them have had cocktails in the hotel bar, he invites Lisa back to his room. Fascinated by her, and in particular by her voice, Michael flatters her into having sex with him.

Afterwards he has a dream where the hotel manager speaks to him in the basement and tells him that while assignations in the hotel rooms are to be expected, Michael can do so with anyone but Lisa. A team of secretaries all offer themselves to him and as he attempts to escape he wakes up. In the morning, Michael and Lisa have breakfast together, but he begins to criticise her behaviour, and soon her voice, which he finds so alluring, begins to pall, and she sounds like everyone else. Later, when he gives his speech, Michael rambles and goes off topic, and his previous confidence deserts him; he sounds alienated and confused. And when he returns home, he still finds no relief from the problems that plague him. 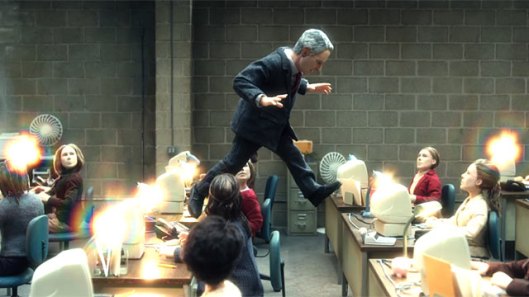 Part of the pleasure of watching Anomalisa is trying to fathom if Michael knows he suffers from Fregoli disorder or not. There are times when it seems as if he does but is choosing to ignore it (or deal with it), and there are times when he seems oblivious to it (you can guess when these moments occur). The movie’s perspective doesn’t help, with everyone except for Michael and Lisa looking the same – and bearing an uncanny resemblance to Sonny from I, Robot (2004). Further disorientation is added by having Tom Noonan voice all the other characters, male or female. (It’s a great idea, and Noonan’s rich tones are used to very good effect.) If we’re seeing all this from Michael’s perspective, then he is aware of it and is choosing to deal with it. But if we’re seeing all this from the vantage point of an observer, then Michael’s awareness of his condition is open to question, and so are his motives.

There’s much that’s open to interpretation either way, but it’s his relationship with Lisa, however short-lived, that holds the key to Michael’s behaviour. His marriage is on the rocks because he’s unhappy with his life in general (because of his disorder?), he’s in town just overnight, alone, and seeking “company”; it’s a cliché waiting to happen. Kaufman relates the ensuing “courtship” with aplomb, embedding an early clue as to Lisa’s “place” in Michael’s mindset (the payoff comes when he gets home), and leading the viewer down the path called misdirection. It’s all cleverly done, and with more than a hint of mischief, and in terms of the narrative, is richly rewarding when all becomes clear at the end.

To explain more would be to ruin the fun of discovering how Michael overcomes his disorder and makes a connection with another person. The stop motion animation style employed appears clunky and hesitant but it’s a perfect fit for Michael’s confused mind and emotions, as well as his lumbering approach to other people. It’s charming too, with little details here and there that add depth to the narrative (the zoo sign that can be seen from Michael’s hotel window). And Kaufman adds sly, witty moments of his trademark humour: the plane that can be seen from Michael’s plane (you know exactly what’s going to happen), and the hotel clerk who taps away at a keyboard without taking his eyes off Michael at all.

So much animation is aimed at the younger market that it’s refreshing to see a completely adult-themed animated movie that doesn’t include talking animals or magical fairy kingdoms. Kaufman and Johnson have created a unique world for us to visit and spend time in, and aided by a beautifully melancholy score by Carter Burwell, have made a movie that resonates long after it’s ended.

Rating: 9/10 – a superb movie in its own right but elevated by its distinctive use of stop motion animation, Anomalisa is a sheer delight from start to finish; with much to say about how we view other people and relate to them in times of emotional crisis, and how insular we can be, it’s also at times unbearably poignant – and that’s a very good thing indeed.