In the US in 2028, water has become a precious, but privatised commodity. When punitive restrictions are put in place by the company that controls the water supply, a riot breaks out that sweeps through Los Angeles. Using the riot as a cover, brothers Sherman (Brown) and Lev (Henry), plus two accomplices, plan to rob the vault of an up-market bank. Their plan backfires, and during their escape, Sherman and Lev are wounded by the police, Lev quite seriously. They manage to get to the Hotel Artemis, a kind of field hospital for criminals, where they are safe from the police, and thanks to the rules, any other criminals who might be there. Run by Nurse (Foster), with assistance from “health care professional” Everest (Bautista), the Artemis offers anonymity in the form of code names based around the room(s) they stay in. With female assassin Nice (Boutella) and loud-mouthed arms dealer Acapulco (Day) already there, Sherman begins to wonder just how safe he and his brother are going to be, especially when Nurse lets in a wounded police officer (Slate) – otherwise a strict no-no – and word reaches them that local crime boss, and founder of the Artemis, the Wolf (Goldblum) is on his way, and in need of medical attention…

Let’s get the obvious comparison out of the way: the Hotel Artemis is the medical facility version of the Continental Hotel in the John Wick movies. But that’s as far as the comparison goes, because in the self-assured hands of writer/director Drew Pearce, Hotel Artemis is a tribute to an era gone by, a high-tech yet nostalgic shout out to a time when honour amongst thieves actually meant something. By pitching the movie ten years on, Pearce is able to draw a distinction between the growing feudal state of affairs outside the hotel, and the semblance of order that Nurse feels compelled to uphold within the hotel’s walls and its rooms. It’s meant to be a neutral base for everyone, but machinations and plotting abound, and it’s not long before alliances are being forged, threats are being backed up, and an escalating sense of impending violence is allowed to bear fruit. The sense of an era coming to an end, imploding in on itself, is highlighted by the encroaching riot, and the swift descent of the hotel “guests” into murderous anarchy. There are rules, but once they begin to be broken, there’s no difference between inside and outside.

Pearce handles all this with a downplayed sense of fun, casting cruel aspersions on the morality of his characters – even the “good guys” do some unpalatable things in this movie – and by making sure everyone suffers to one degree or another. The humour is pitch black at times, but plays in support to the drama rather than overwhelming it, and Pearce draws out strong perfprmances from his cast, with Foster reminding us just how good an actress she is, while Brown continues his rise to the A-list, and Boutella exudes a silky menace that is captivating and unpleasant at the same time. Some things, however, are less successful. Slate’s wounded police officer awkwardly provides Nurse with a back story that feels forced and unnecessary, and Day’s obnoxious, sexist arms dealer seems like a throwback to the Nineties. But the real MVP of the movie is the Artemis itself, a triumph of cinematography, lighting, production design, art direction and set decoration that reflects the tired glory of the premises through the faded glamour of its hallways and rooms. It’s the perfect setting in which to record the end of an era…

Rating: 8/10 – flecked with nostalgia and a wistful harking back to simpler times, Hotel Artemis is a violent crime thriller that has a surprising amount of heart, and which tells its story with a welcome measure of simplicity; boosted by the detailed backdrop of the hotel itself, it’s a welcome entry into a sub-genre of crime drama that has slowly been cannabalising itself for far too long. 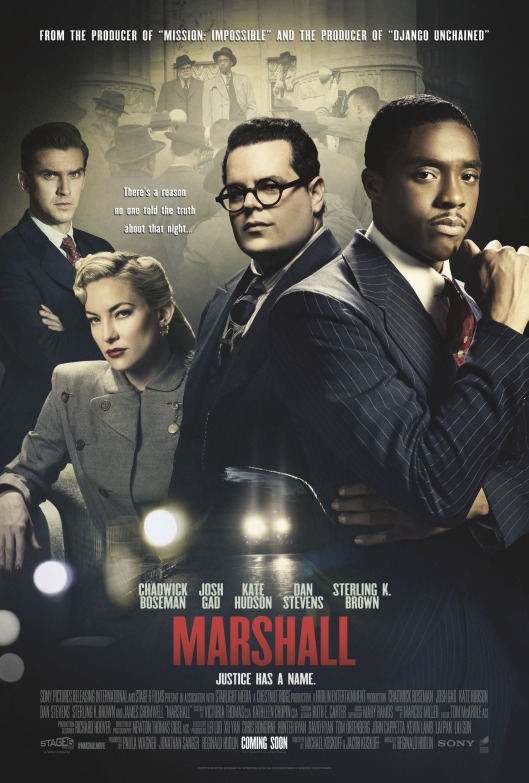 Thurgood Marshall (Boseman) was a lawyer who worked across the US for the National Association for the Advancement of Coloured People (NAACP) during the Thirties and Forties. During his time with the NAACP he tried cases in front of the US Supreme Court, and won twenty-nine out of thirty-two of them. His most famous case was Brown v Board of Education, Topeka in 1954, in which the the educational segregation of whites and blacks was deemed unconstitutional. It was a landmark case, and a major victory for the Civil Rights Movement. But instead of telling that story, the makers of Marshall have opted to tell the story of The State of Connecticut v Joseph Spell, a lurid rape case that occurred in 1940. The movie, capably directed by Reginald Hudlin from a screenplay by father and son team Michael and Jakob Koskoff, also makes the decision to change things around so that Marshall himself is the focus and not the original trial lawyer, Sam Friedman (Gad). Does this really matter in a movie that’s based on a true story? Let’s answer that with another question: what’s wrong with the true story by itself?

The differences between what actually happened and what occurs in the movie are many (as you might expect), but one aspect that leaves a bitter after taste is the treatment of Sam Friedman. Here he’s Marshall’s flunky, criticised repeatedly, and treated in such a poor way for so long that bullying becomes the only word for it. In a role reversal that would be outrageous if it weren’t so credulous, Marshall treats Friedman as if their racial positions were reversed: Marshall is the master and Friedman is the slave. Friedman was a more than capable lawyer who in 1940 had more trial experience than Marshall, and who was hired by the NAACP to defend Joseph Spell (Brown). Marshall was sent as a consultant, and the legal liberties the movie takes to reduce his presence in court while at the same time making him look like a puppet master pulling Friedman’s strings, is objectionable. While it’s good to see an educated, strong, confident, and positive example of a black man on our screens, did it really have to be at the expense of the white man who actually did all the heavy lifting? 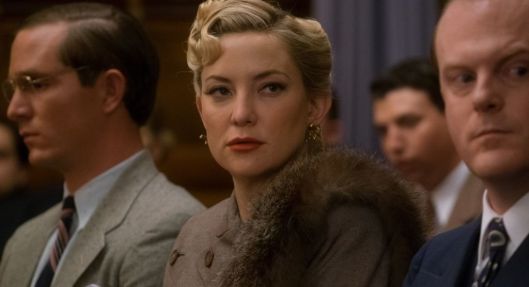 Things aren’t helped by the predictable plotting, and the stereotypical characters, from Stevens’ arrogant prosecution lawyer to Cromwell’s obstructionist, authoritarian judge. The trial scenes have a certain amount of energy to them, as do the flashbacks to the night of the rape (Spell was a chauffeur who was accused by his employer’s wife, Eleanor Strubing (Hudson), of rape and attempted murder), but away from the courtroom, much of the movie is perfunctory, and the visuals are quite drab. It’s also a movie that recounts the more tawdry aspects of the alleged rape with a degree of detachment, and what should be shocking sounds more as if it were unrelated to anyone who’s actually involved in it all. As Marshall, Boseman adds another real-life person to his resumé, and invests the character with a lot of passion and vigour, but as the movie finally gets round to giving Friedman his due, Marshall becomes a secondary character and his impact diminishes. Gad handles the enforced comic aspects of his character with his usual amiable skill, but doesn’t always look comfortable doing so. Hudson brings a degree of ambiguity to her role as Eleanor, and Brown is a solid, dependable presence throughout. In dramatic terms, the verdict is a given, and it’s a mark of the movie’s lacklustre approach, that when that verdict is announced, the response from the viewer is likely to be “Okay” instead of Oh my God!”

Rating: 6/10 – patchy and hesitant in parts, Marshall beefs up its main character’s involvement in a rape trial and spends much of its time reminding the viewer that Thurgood Marshall was a better man than anyone else depicted in the movie; a hagiography then – though not the first – and one that, by adopting such an approach, reinforces that old newspaper saying, “If you can’t print the truth, print the legend”.