Opening in 1864, Renegade Girl is a mixed bag of a Western featuring Savage as Jean Shelby, a notorious road agent working with Quantrill’s raiders. She and her brother Bob (James Martin) have been passing information to Quantrill (Corrigan) in their fight against the North. When Bob is killed by renegade Cherokee, White Cloud (Chief Thundercloud), she vows revenge against him. At the same time she meets and falls in love with a Yankee captain, Fred Raymond (Curtis). Saving him from Quantrill and his men she ends up being wounded during an encounter with White Cloud.

Her recovery takes her a year. The war is over but Jean receives a visit from two of Quantrill’s men, Jerry Long (Wade) and Bob Crandall (Brophy). They tell her that the survivors of Quantrill’s band are hiding in the nearby hills and are looking to target people who helped the North win the war. Long has amorous intentions towards Jean and wants her to join them; at first she rebuffs him, but not having seen or heard from Raymond since she was wounded, she decides to join them on the understanding that they help her find White Cloud and kill him once and for all… 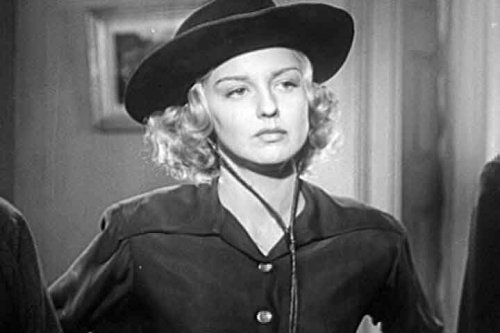 Filmed on Corrigan’s own ranch in Simi Valley, California, Renegade Girl is entertaining enough but suffers from too many close-ups of the dour, stony-faced Savage. While the character of Jean is meant to be proud, self-sufficient and courageous, Savage plays her instead as petulant and wilful. It’s not a great choice as Jean is a strong character with a good story arc and plenty of dramatic moments for any actress to sink her teeth into. Savage also adopts a kind of angry monotone to many of her lines and this approach soon becomes tiresome to hear. Supporting her, Curtis is largely colourless as her love interest, Wade brings an insouciant menace not often seen in low-budget Westerns as the devious Long, while Brophy shines – as always – as the loyal sidekick/comic relief; there’s a lovely, touching scene between him and Savage that’s worth watching all by itself. As the renegade Indian, Chief Thundercloud is badly underused and wears an unfeasibly tall black hat to mark him out as the main villain.

Otherwise, the script by Edwin V. Westrate is more than adequate, and while not entirely original, does take a few unexpected turns, as well as maintaining its moral through-line. There is redemption and sacrifice, and the decisions made by Jean are considered before she moves ahead with them. There’s even a short sequence where she has a kind of mental breakdown over something she’s caused to happen (Savage doesn’t play it particularly well though).

Berke – who directed five other movies in 1946, including the bizarrely named Ding Dong Williams – has a fluent shooting style and stages the various action sequences with a greater conviction than perhaps was expected by the budget. Occasionally his blocking of a scene leads to too many bodies being in the frame at the same time, but this is a minor quibble. The photography by James S. Brown Jr shows off Corrigan’s ranch to good effect, and the music by Darrell Calker adds to the mood of the movie without overwhelming it.

Despite the miscasting of Savage in the lead role, Renegade Girl is an enjoyable Western that zips along quite well and doesn’t outstay its welcome. Berke is a director to keep an eye out for, and while some of the more overtly romantic aspects of the script may cause advanced tooth decay in some viewers – Jean goes all googly-eyed over Raymond from the moment she first sees him – this is still a fun to way spend sixty-five minutes.

Rating: 6/10 – undone by Savage’s inability to understand her character, Renegade Girls is still far better than it appears on paper, and works best when focused on Jean’s almost primal need for revenge.